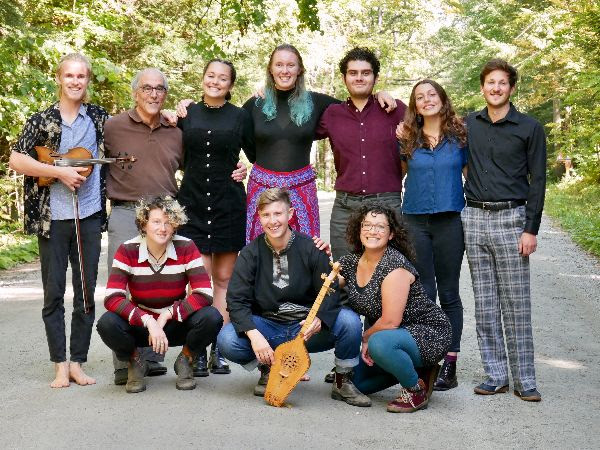 Northern Harmony, an ensemble of ten brilliant young singers led by Larry Gordon, presents a concert of seasonal songs from world harmony traditions as well as Renaissance works on Saturday Jan. 16,  at 7 p.m., at the Chandler Center for the Arts in Randolph, Vt.

All the singers are COVID tested, and have been quarantining in Marshfield, preparing this concert program so that they can perform together safely under the state guidelines.

Northern Harmony is the highest level performing group under the umbrella of the world music organization Village Harmony, which sponsors singing camps and workshops in New England and many parts of the world  (see www.villageharmony.org).   Through 25 years of international touring the group has won wide recognition for its exciting command of very diverse singing styles and timbres.  All the singers in the present ensemble are veterans of many years of Village Harmony and Northern Harmony programs and have toured widely in Western Europe, Caucasus Georgia, and South Africa.

The concert program presents a selection of music from many different countries and  vocal styles including 15th and 16th century Spanish and Italian renaissance works; traditional songs from Bulgaria, Georgia and Corsica; traditional English carols; and American Appalachian and shape-note songs.

The Renaissance pieces include works by Johannes Ciconia and Juan del Encina from the 14th and 15th centuries and lively anonymous villancicos from mid-16th century collections.

On several numbers the voices will be accompanied by a brilliant band of fiddles, accordion, guitar, and drum.

Image provided by Chandler Center for the Arts