Film Screening: Portrait of An Artist

As part of the exhibition, “Ray Brown: Tumbling toward the End, ” The Front Gallery will present a free screening of “Portrait of an Artist,” the feature length documentary film about Brown by filmmaker Nat Winthrop, on Sunday, March 22 at 2 pm at the gallery.

The first solo show presented at the Front, takes its title from the last collection of poems by Vermont poet David Budbill – a volume that, like Ray Brown’s work, considers beauty together with imminent mortality, and what it means to have a fleeting present and a fickle body. Brown, who has been a fixture of the Montpelier art scene for many years, has been a member of the Front since 2018. He is the first of our members to present a solo show as part of the gallery’s new format, which will alternate between all-member group shows and solo shows every month, with openings on the first Friday of the month.

The works Ray Brown presents in this show are all from the past fifteen years, since a stroke at age sixty-five changed the way he paints – he learned to use his left arm instead of his right – as well as the way he thinks and uses his memory. Now at age seventy-nine, he is still inspired by the visible world, loosely basing compositions on the golden mean – a ratio of proportions often found in nature and widely used in renaissance painting. 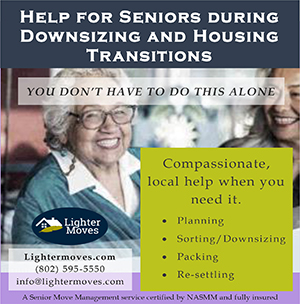