Home Arts Book Review Montpelier’s Green Mount Cemetery: A Window into the Past
Facebook
Twitter
Email
In Paul Heller’s latest book, “Montpelier’s Green Mount Cemetery: A History and Guide” (independently published; Oct. 17, 2022), local history comes alive with the stories of those who called Monptelier home (and were buried here). The skill and artistry of some of the stones are part of the story, the talented granite sculptors and the unusual graves, but for me Heller’s stories about people led me to connect to Montpelier today.  As Montpelier’s first park built in 1855, Green Mount was inspired by the rural garden cemetery design movement, in which the natural environment offers a green space for people to enjoy. There were earlier gravesites in Montpelier before Green Mount, notably on Elm Street, but these were moved to Green Mount. A Gothic-style chapel and vault given by John Hubbard greets visitors at the entrance. Visible from Route 2 are the Stowell stone stairs chiseled by hand into a rock ledge by a Civil War veteran, Charles Bailey, to honor William Alonzo Stowell, a railroad man.  Heller includes a map with GPS coordinates for the graves. Some of the sites are nameless, marking the graves of those indigent or homeless buried in “Potter’s Field,” named after the clay deposits there used to make pots.  A designated “Soldier’s Lot” contains the remains of Union soldiers, some of whom died at Montpelier’s Sloan Hospital. What is known of these men is sketched out by Heller, giving honor to those who did not have a family plot. Special stones honor four who received the Medal of Honor, and Heller’s history here is detailed and fascinating. There are almost 200 graves of Civil War veterans in the cemetery.  And then there’s the dog! Mary Peck’s husband, a hero of the Civil War, is buried alongside his wife and her favorite canine. According to a contemporary source, Mrs. Peck, a women’s suffragist, “thought more of that dog than she did of anyone in Montpelier.”  A photograph of the grave of Margaret Pitkin adorns the cover of the book. The only child from a prominent family connected to Montpelier’s Lane Shops, Pitkin was described as “a bright and winsome little girl loved by everyone” when she lit the ceremonial bonfire during Dewey Day in 1899, honoring the hometown hero of the Spanish American War. She died of spinal meningitis that year. The graves of children, some unnamed, are a poignant reminder of child mortality in those days.  The grave of Margaret Pitkin is one of the park’s most beautiful monuments, carved by Harry J. Bertoli, a sculptor of renown who came from Carrara, Italy. Bertoli also created the large statue in the cemetery for water commissioner Joel Foster, depicted on a pedestal, leaning on a fire hydrant and holding his derby hat.  Not all the stories are about the past: Poet David Budbill, who died in 2016, is honored by a hidden shrine on a rocky outcropping with his farewell message: “Since we will all have a suffering world, we must always have a song.”  We learn of J.P. Miller, an abolitionist and supporter of women’s rights, who fought for Greek independence in the war with Turkey. He brought home to Montpelier two children orphaned by the war. He lived on the land next to what is now Sarducci’s, replaced by the railroad depot after a fire.  I have heard the legend of “Black Agnes” and the spooky tales that have entranced young people through the years (although I was puzzled when a teen recounted the story of “Black Angus.” What would livestock have to do with a ghost?). The various curses and stories focus on a seated bronze statue of a figure with voluminous drapery, a monument for John Hubbard. Heller explores the folk legends and speculates on the origin of the curse story, as well as telling the fascinating life story of Hubbard himself.  Heller’s research provides an entrance point for the reader, connecting biography to history, and supplies context for the people who lived and died in Montpelier. It would be a great companion on your next walk in this beautiful spot.  Paul Heller’s “Montpelier’s Green Mount Cemetery: A History and Guide” is available at local bookstores and online.
UNDERWRITING SUPPORT PROVIDED BY 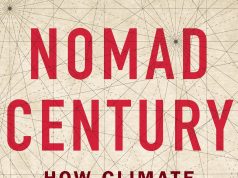 ‘Nomad Century’: Recommended for All