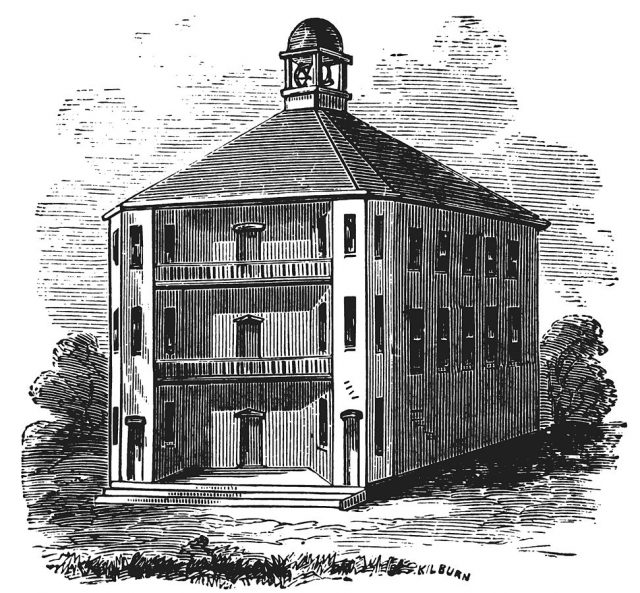 Laborers completed construction on Montpelier’s first Statehouse in 1808, leading to the development of State Street, which soon stood to host “Election days.” Plans for the wide, straight street had been laid out in 1807, including a bridge over what they called “The Branch” of the river connecting the developing village center to the land where the Statehouse emerged. The Statehouse’s foundation was complete by July 1807 and became the site of Montpelier’s first Fourth of July celebration. With Montpelier chosen as the new seat of government, “great were the preparations made among the villagers” for the coming new and important days of “Election” held over several days in 1808, according to Daniel Pearce Thompson’s “History of Montpelier from 1781 to the year 1860.”  The elections were for the U.S. President, plus Vermont state representatives and officials. Preparations included clearing the streets of lumber and rubbish, painting houses, purchasing new suits of clothing, and everything else to “assume the sprucest appearance” in what they called “Montpelier Hollow.” Military units dressed in uniforms including “plumed Bonaparte hats” were organized to serve as the Governor’s Guard to be in attendance on election days.  Isaac Putnam was chosen as the first captain. They fired “a great cannon,” which historian Thompson recalls personally witnessing as a boy. He conveys excitement among crowds of people from miles around to see the “showy procession” led by military marching in pomp of flags and drums, followed by the state officers, members of the legislature, a group of citizens, and the Reverend Sylvanus Haynes, who preached the Election sermon. By sunset, Isaac Tichner was Vermont’s governor again (he served as the third and fifth governor of Vermont). Pearson also recalls the voice of Israel P. Dana, sheriff of the county, “standing on the upper terrace of the Statehouse, and loudly proclaiming ‘Hear ye! hear ye! hear ye! the Honorable Paul Brigham has been elected Lieutenant Governor, in and over the State of Vermont, by the suffrages of the freemen. God save the people!’ Followed by more cannon fire. United States Secretary of State James Madison became president that year, succeeding Thomas Jefferson. Later that evening following elections, Montpelier area settlers could head home in the night for some rest and relaxation after all the excitement.
UNDERWRITING SUPPORT PROVIDED BY