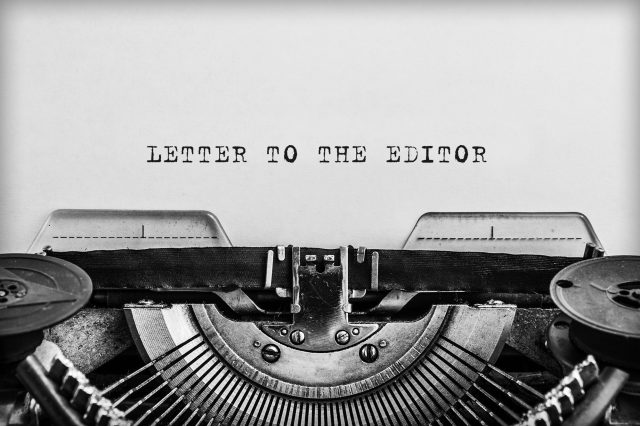 To the Editor: I live smack dab next door to the Gary Residence and its expansion in process, “Clara’s Garden,” which has been a Hell on earth experience.  Just like the Joni Mitchell song, “they paved paradise, put up a parking lot”; AND a LOCKED “memory unit.”  Why? So anxious relatives can rest, reassured that their elder with dementia won’t wander away from the nursing home. The pros and cons of how America accommodates the rising number of cognitively impaired seniors is a topic for another essay.  I speak regarding the NOISE POLLUTION I have endured as my neighbors expand their facility. Back in August, they began feeding beautiful 50-year-old silver maples into ear-piercing wood chippers. Then, each weekday, from 7 a.m. to 5 p.m., construction cacophony abounded. All day warning beeps from machinery backing up, sudden sound explosions, and whirring from the ground-breaking machinery disturbed my peace. Sometimes, the floor of my apartment shook.  What irony, that Gary residents also have had to live through it! They weren’t evacuated while construction is under way. I hope those Gary Residence families receive a discount on their $6000+/month. (thegaryresidence.com/floor-plans/
current-rates) This goes back to what gets considered “good” medical/nursing home care. American medicine has devolved, leaving the healing ENVIRONMENT out of its recipe for rest and recuperation. Hospitals are some of the most chaotic and cacophonous places imaginable; yet we ignore that “background noise” while dancing through life-threatening healing crises. Bottom line: hospitals and nursing homes are not generally very good places in which to heal, or even to rest. I give daily thanks that I don’t have the wealth and privilege to be “cared for” by providers who would support such a project with NO REGARD for the neighbors, and that would have me age in place in a locked ward. Not much grace there, in my humble opinion. Opeyemi Parham, M.D., Montpelier

An Allocation Crisis in Housing, Labor, and Carbon

To the Editor: Housing in Vermont is expensive, but not because of a “housing shortage.” According to census data, Vermont’s population grew 2.8% and housing grew 3.7% in the last 10 years. Recently, the population has declined 0.12% in Vermont, while house size has grown. In 1950 it was 1,000 square feet; now 1,800 is the average, and new homes built in 2019 average 2,600 square feet; the vacancy rate is at 18.7%. Water everywhere but not a drop to drink.  Supply is great and prices are high because people who can afford it want excess space. As the climate gets more inclement (bad weather and pandemics) demand grows for more indoor space. Excess wealth (generated by our economic system) needs a house or three to spend it on as an ATM and a “good investment.” It takes a lot of labor to maintain big empty houses and to build new ones. This and other factors have led to a labor shortage in the trades. It takes a long time to train people in the trades, and there are very few young people in the pipeline, which means that we might be living with this housing shortage for a long time.  In the past this would not be that urgent a problem, but we have a new elephant in the room: climate change — and it changes everything. More than ever, we need workers doing the work of climate change mitigation and carbon emission reduction (decarbonizing). We have a deadline for people in the trades to install solar panels, heating systems and insulation. We need people to fix old cars and existing homes so we don’t have to replace them with carbon-intensive new ones.  May I suggest a simple rule? Do not waste carbon on creating things that waste more carbon, use carbon to reduce carbon in the shortest possible time frame.  Chris Pratt, East Montpelier, owner of Open Sash, a window weatherization company.

To the Editor: I contributed to conversations in this community on Front Porch Forum. In late October, FPF blocked my ability to submit a post. A week later, FPF terminated my account. Also my wife’s account because of her association with me. The for-profit corporation Front Porch Forum, and presumably its Burlington-based co-founder and CEO Michael Wood-Lewis, decided we shouldn’t be a part of the Montpelier community — even though many people in our community were grateful that I was willing to raise challenging topics with community members. For the full story, visit FrontPorchFlimflam.com. Bring a good, deep cup of tea or coffee. Public-facing FPF is one thing. Private FPF another. People, many of whom are FPF donors, believe FPF is an open and free place to engage with their community in a variety of ways. FPF says that’s what it’s for. In reality, FPF staff is deciding how communities across the state engage, what members of a community can engage, and what those people can discuss as a community.  Using its status under Vermont law (which confuses people), its own self-styling as “essential civic infrastructure in Vermont,” its various donation campaigns, its media coverage and marketing copy, and its FAQs, FPF presents itself as being something it decidedly isn’t. Governments use FPF, sometimes with taxpayer money, to keep the public informed, and they point community members to FPF to stay up to date. Yet FPF gets to cut community members off from that information. Right now, in its private communications with members, FPF is trying to discredit me and the public story I’m telling. I believe people should know the truth. There’s no other purpose in telling this story. In creating FrontPorchFlimflam.com, I’m asking nothing of anyone but to hear the story.  What happens after that is not up to me. It’s up to you. Kristian Connolly, Montpelier

To the Editor: Regarding the VSECU merger being voted through by only 318 votes, shouldn’t there be a RECOUNT. That is too close a number not to be checked into. There were reports of members having difficulty doing their vote online. Hopefully previous VSECU CEOs can block this merger until a recount is done. These previous CEOs never threw their members under the bus like this one has. S.O.S.   Brian Resnick, Montpelier
UNDERWRITING SUPPORT PROVIDED BY