Home Columns History Corner History Corner: The December Death of a Vermont ‘Factory Girl
Facebook
Twitter
Email
Days before Christmas in 1832, the discovery of a frozen ‘factory girl’ sparked a sinister sensation in New England. It was one of the region’s first murder cases involving a member of the clergy. And the victim’s story led back to Vermont, where she was born.  It started on Dec. 21, 1832, when Tiverton, Rhode Island farmer John Durfee woke up to find a woman’s frozen body wrapped in a long black cloak and hanging from a stack pole used to dry hay on his land. After cutting the cord wrapped around the corpse’s throat, he brushed back dark tousled hair to reveal an unknown face. She was identified as 29-year-old Vermont native Sarah Maria Cornell, who had wandered New England from job to job as a ‘factory girl’ most of her adult life, according to Catherine Read in her book, “Fall River: an authentic narrative,” published in 1834. A crowd gathered at the scene, and in a rush to learn more, they retrieved her letters and notes from her rented room in nearby Fall River, Massachusetts. One crumpled note read, “If I should be missing, enquire of The Rev. Mr. E.K. Avery of Bristol; he will know where I am.” The note referred to Rev. Ephraim Kingsbury Avery, a married Methodist minister and father of several children who had been Cornell’s religious adviser when she worked at a mill in Lowell, Massachusetts. Some people soon came forward to air knowledge of inappropriate contact between Cornell and Avery. An autopsy revealed Cornell was pregnant. Did he murder her? Or did she kill herself? Initial investigators deemed Cornell’s death a suicide motivated by her having been subject to “the wicked conduct of a married man.” Scrapes, bruises, and gruesome internal injuries on her lower torso suggested she had been violated. More information surfaced, and Rev. Avery went into hiding. He was arrested in New Hampshire and brought to a long, ugly trial in Newport, R.I. Witnesses for both sides disparaged the other. Some testified Cornell had threatened to kill herself several times, she drank fruit-flavored alcohol, and went out alone at night with men. She was accused of being “utterly unprincipled” and “profligate.” Others praised her as being a virtuous church-goer. On June 2, 1833, a jury delivered the verdict after deliberating for 16 hours: not guilty.  The trial divided public opinion. Some demanded justice for Cornell, while Methodist church sympathizers supported Avery. In the end, although he was declared innocent by the jury, Avery had to move out of New England to live out his life.
UNDERWRITING SUPPORT PROVIDED BY

History Corner: The First (Tragic) Thanksgiving in the Settlement 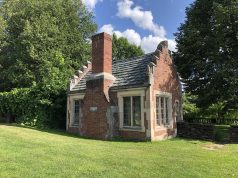