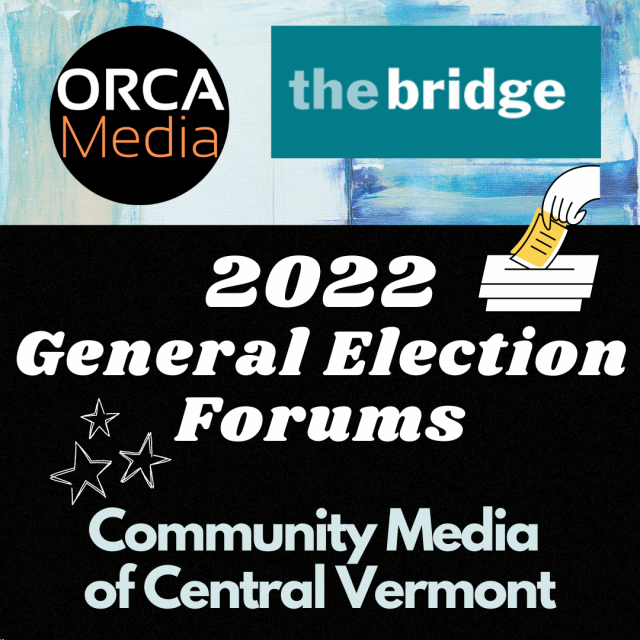 The midterm election is coming Nov. 8, and to help you get to know your local and statewide candidates, The Bridge and ORCA Media have teamed up to present a series of live candidate forums over the next two weeks.  The first forum is Wednesday, Oct. 5, at 6 p.m., featuring Barre City candidates for state representative, Washington-3 district, followed by a 7:30 p.m. forum for the Washington-4 district, Montpelier’s State Representative race. We hope you’ll tune in.  With a focus on Washington County’s state Senate and House districts (plus the Vermont Governor,  Lt. Governor, and Secretary of State races), we plan to bring you 10 forums in which candidates will have the opportunity to answer questions from The Bridge, the community, and our moderators. The forums will all be live-streamed on ORCA Media’s Youtube Channel and broadcast locally on Comcast throughout Central Vermont on ORCA Media channel 1085.  View candidate forums live at orcamedia.net/series/2022-general-election-forums-live-presented-orca-media-and-bridge, or YouTube: youtube.com/orcamedia, where they can be viewed later as well.

Participating Candidates: Peter Anthony, D; Brian Judd, R; Thomas Kelly, R; Jonathan Williams, D Moderator: John Hollar, former Mayor of Montpelier from 2012 to 2018, and chair of the Montpelier school board from 2002 to 2010. He practiced law in Montpelier from 1990 to 2020, and was a partner with partner with Downs Rachlin Martin PLLC, Vermont’s largest law firm.

Participating Candidates: Saudia Lamont, D; Avram Patt, D Moderators: Co-hosts of All Things LGBTQ on ORCA Media:  Anne Charles, Ph.D., professor of English at several colleges and universities for 30 years. Linda Quinlan, author of the poetry collection “Chelsea Creek,” winner of the “Wicked Woman’s Award,” and former Poet of the Year in Wisconsin. Keith Goslant, advocate and activist for the LGBTQ+ communities since 1985. He worked for 47 years at the Vermont State Hospital and Vermont Department of Mental Health.

Participating Candidates: Tina Golon, R; Marc B. Mihaly, D Moderator: Keith Goslant, advocate and activist for the LGBTQ+ communities since 1985. He worked for 47 years at the Vermont State Hospital and Vermont Department of Mental Health. He is a co-host of All Things LGBTQ, on ORCA Media.

Participating Candidates: Joe Benning, R; David Zuckerman, P/D Moderator: Nat Frothingham, one of the founding members of The Bridge and The Bridge’s publisher and editor until 2018.