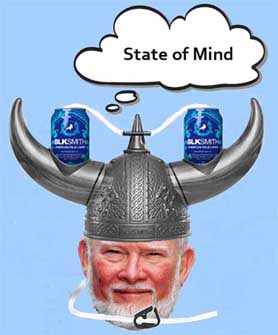 What is this fascination with fast food? For as far back as I can remember, which lately is about two days ago, I have always been a one-flip burger cook. By that I mean I usually let my burgers sit on the grill for a while and then just flip them over once to cook the other side. As any red-blooded American weekend grillmaster knows, that gives me time to include a very important ingredient in the grilling process — beer. But I have just learned from one of my favorite science magazines that my technique is under scrutiny. Let me explain further. I come from the Julia Child and Chef Emeril Lagasse school of thought, which is that cooking should always involve wine or beer.  I am particularly fond of Emeril’s “three-beer roux” technique. Roux, of course, is an essential base in making Cajun gumbos. If you have never made a roux for gumbo, it is a process of cooking flour in vegetable oil until the flour becomes toasted brown. The depth of the brown color of the roux depends on the type of gumbo you are making.  As Emeril explained in between “BAM!s” on one of his TV shows a few years ago, in his technique he starts with raw flour, vegetable oil, and a bottle of beer. He stirs the flour and oil in a heavy pot over low to medium heat as he drinks the beer. He then opens a second bottle of beer and continues stirring. When he has finished the second bottle of beer, he opens a third, all while continuing to stir the roux. When the third bottle of beer is gone, he claims the color of the roux should be just about right.  That, in my estimation, is a very civilized way to cook. But a roux is not a burger, and apparently some people are not interested in the “slow food” movement — or beer — and want to get their burgers done as fast as possible.  Finding the fastest way to cook burgers was apparently behind the work of one Jean-Luc Thiffeault, a mathematician at the University of Wisconsin at Madison. According to a paper he published back in June 2022 in the journal “Physica D: Nonlinear Phenomena,” flipping your burgers more than once can speed up the cooking process. I suppose with a name like that you would think he would have at least two Michelin stars. Or command a federation starship.  Thiffeault mathematically modeled how heat moves through a burger — in his case a theoretical slab of ground beef 1 centimeter thick (about 7/16th of an inch) as it cooks on a grill. Thiffeault determined that it took about 80 seconds to cook his theoretical burger if it is only flipped once half-way through the cooking process, whereas if it is flipped 10 times at intervals of six to 11 seconds, the burger will be done in 69 seconds — a whopping 11 SECONDS faster! Now I know what you’re thinking, “But Lare, this is a mathematical model of a burger, not the real thing. To quote one old lady, ‘Where’s the beef!?’” According to the author of the science magazine article, Anil Oza, Thiffeault’s mathematical findings conform with the observations that chef and food writer J. Kenji Lopez-Alt published on the website Serious Eats back in 2019. Lopez-Alt compared the internal temperatures of real burgers flipped only once with burgers flipped at 15-second intervals. According to Lopez-Alt’s findings, flipping a burger more often shortened the time required for the internal temperature to reach 52⁰C (125.5⁰F) by almost one third. Now I can understand your interest in these findings if you are at the grill and surrounded by a throng of starving and therefore ill-tempered five-year-olds clamoring for grub, but consider this. Both Lopez-Alt and Thiffeault pointed out that merely getting a burger cooked does not take into account such aspects of enjoyment as a nice sear on the patty, those cute little grill marks, or the juiciness of the finished product. Thiffeault even suggested no one would want to eat his burger because at an internal temperature of near 160⁰F, it would be quite well done. And beyond being well done, it is only a mathematical model of a burger, probably consisting of things like a whole bunch of quadratic equations, trigonometric functions, and Pythagorean theorems all cooked dead together with their polynomials burnt off. Yum, yum!  Speed cooking burgers also does not take into account something else — the beer! If you are flipping your burgers every six seconds and cooking them in 69 seconds, you would only have time to drink one beer, not three. Your hands would be so busy with spatulas you would look like a teen-age mutant ninja turtle with nunchucks and would be barely able to grab hold of a longneck PBR.  So I am not inclined to change my ways. Still, if for some reason I had to speed cook my burgers, I do have a solution to the beer problem. Somewhere in a closet around here I still have from my college days my old beer helmet with straws, which would at least free up my hands.
UNDERWRITING SUPPORT PROVIDED BY