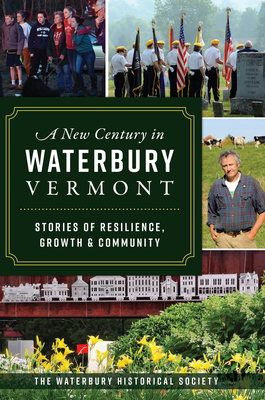 Members of the Waterbury Historical Society spent the last two years compiling stories from their town, resulting in the book “A New Century in Waterbury, Vermont: Stories of Resilience, Growth, and Community” just out from The History Press.  “After realizing that the society had not published a book for 20 years, we sent out an initial survey to gauge interest, which was overwhelming. We sent out invitations at the beginning of COVID,” says Jane Willard, one of the committee members who saw the project from start to finish.  “We asked folks to submit a brief history of their business with their hopes for the future. The response was overwhelming,” she added. Laura Parette, Cindy Parks, and Stephen T. Van Esen were also key figures in the project, along with many local voices. Chapters in the book capture the many facets of Waterbury, including agriculture and the challenge of farm survival. One of the two working dairy farms in town, the Davis Family Farm, is exploring growing hemp as an alternative to dairy to provide a better future. Another, the Green Mountain Garlic Farm run by Bob and Cindy Maynard, transitioned from their bicycle tour business to converting an old hayfield on Kneeland Flats Road to raise garlic and sell the seed stock as well as offering vegetables at their farm stand. Bob and Carlie Murray began a tree farm that is a favorite holiday tradition for families.  The chapter also highlights the famed Wallace Farm on Blush Hill, which sustained a tragic fire on Easter of 2018, bringing the entire community close to support the farmer Rosina Wallace. And George Woodard, Jr., a filmmaker and comedian known for the popular Ground Hog Opry tours, writes of the draw of this century-old family hillside farm. Resilience is the theme of many chapters, as Waterbury recovers from Tropical Storm Irene in 2011, or provides services to citizens during the pandemic. Keith Goslant tells the story of the Vermont State Hospital, the rescue of patients during flooding, and the final closing of the facility. The renovation of the 1890 hospital into the Vermont state offices involved engineering challenges of a flood elevation as well as architectural skill in preserving the historic core of the complex.  The book is not a history text; it is, rather, a story of one Vermont community working together in the first two decades of this century to celebrate. Events such as the River of Light lantern parade, the Memorial Day Ghost Walk, Arts Fest and Winterfest, and the quirky Winter Croquet Tournament led by local radio station WDEV, tell of families and businesses joining together, overcoming obstacles, and just taking delight in each other. And there’s the beer. Liz Schlegel writes of craft beer in Waterbury’s recent history: The Alchemist, Prohibition Pig, and the success of Heady Topper, Blackback Pub, and farm-to-plate dining experiences that draw foodies from far and wide. Tourist destinations such as Ben and Jerry’s are represented as an important part of the area’s economic success. The historical society partnered with two local groups to create this book: Revitalizing Waterbury, and the local Rotary Club. Willard talks of the challenges of editing this book, and commends wordsmith Steve Van Esen with the Sunday afternoon sessions with successive drafts. “He served us red wine, pistachios, and dark chocolate, which helped the attendance a great deal,” according to Willard.  So much material did not end up in the publication, such as church histories, but these are on the website, thanks to the president of the Waterbury Historical Society, Cheryl Casey, and the cataloging software PastPerfect. Many hands went into the making of this project, from all corners of the community. You learn of the Waterbury Unleashed Dog park, the Backcountry Rescue Team, artists, architects, innkeepers, and students.  The book is dedicated to Jack Carter, who died a year ago, a local businessman who led the charge for preserving Waterbury’s historical past while ensuring its vitality in the new century. He served as fact-checker and wrote a comprehensive timeline of the town’s history from 1763 to the completion of a reconstructed Main Street in 2021 and “A Window onto Stowe Street.” “A New Century in Waterbury, Vermont” is available in town from the History Center at 28 North Main Street, at the municipal offices, from the historical society — and from Amazon.
UNDERWRITING SUPPORT PROVIDED BY

The End of Polio?