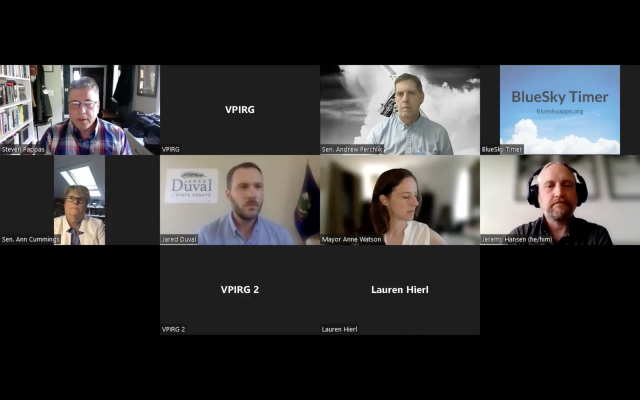 Five Democratic candidates seeking to fill three Washington County senate seats aired views during an online forum last month. The forum, moderated by Times Argus executive editor and publisher Steve Pappas, was hosted by Vermont Conservation Voters and the Vermont Public Interest Research Group. One of the seats opened up to newcomers when Sen. Anthony Pollina announced he would not seek another term after 12 years in the Senate. The other two seats are being sought by their incumbents. Only Democratic candidates were included because only two Republicans have registered as candidates and so there is no primary election contest between them. The Republican candidates are Dwayne Tucker of Barre Town and Matthew Bean of Northfield. As for the Democrats, incumbent Sen. Ann Cummings is seeking her 13th two-year term, while Sen. Andrew Perchlik is seeking his third term. The other three candidates are Jared Duval of Montpelier, Jeremy Hansen of Berlin, and Anne Watson of Montpelier. Duval is the executive director of Energy Action Network and has worked as economic development director for the Agency of Commerce and Community Development. Hansen is a former Berlin Selectboard member and a Norwich University computer science professor who founded CVFiber. Watson is mayor of Montpelier, former city council member, and a physics teacher at Montpelier High School. Pappas posed several questions ranging from climate change response to housing to racial equity, but The Bridge pulled out the first two questions, and the one on housing since the length of covering the whole event would have been prohibitive. The full link to the event can be found at vermontconservationvoters.com.

“The climate crisis is the most pressing issue facing our country. What do you say to young people to give them hope for a bright and habitable planet and what will you commit to today and to them to address the crisis and the scale and pace that this challenge requires?” Ann Cummings, a former Montpelier of Mayor and retired real estate agent, said the question is challenging because Vermont has a “small energy footstep” [sic]. She said she supported the clean heat bills in the past and is committed to getting public funding to help moderate-income and low-income Vermonters complete weatherization and to switch over to sources of energy other than fossil fuels. Right now it is a struggle to produce more electricity, and yet keep the price down, particularly since electricity is currently the “almost only alternative” energy source. Cummings also noted that this isn’t the first time the state tried to rely on electricity when the price of oil got too high. She noted about how in the past people started to put electric heating sources in their homes, but the price of electricity went so high that people went back to oil heat and natural gas.  Jared Duval said dealing with the climate crisis has been his life’s work. “I began as a student organizer, community organizer, and climate organizer at the age of 16, before I could vote because I knew how important this was to our future.” Duval said he agrees in offering equitable transition opportunities to get low-income and middle-income residents off fossil fuels Jeremy Hansen said it is important to “show up” and let your voice be heard so politicians know how important the climate crisis issue is to people. “This is a scary time. We are at the inflection point of a number of different issues and we need everybody to show up.” Small incremental changes are good, but Hansen said the state needs to look at structural change, like a carbon tax, land conservation, and telecommuting. Andrew Perchlik, director of the Vermont Clean Energy Development Fund, said young people should know that “we have the answers. We know what to do to solve the climate crisis, we just need to have the political will and the pressure from the populace to make sure the government does it.” He said he promises to push the Vermont Green New Deal to bring renewable energy structure up to 100%. He also said he supports fully transitioning the transportation infrastructure to an electric infrastructure while increasing public transportation and on-demand transportation. Anne Watson touted her work as mayor of Montpelier instrumental in bringing the renewable energy sources for the municipality up to 40%. Not wanting to rest on her laurels, Watson said, “but that is not enough. We need to be doing more not just for the city but for the state and for Washington County.” Watson supports lifting the cap on solar energy from 500 kw per any one customer and would like to help renters transition to renewable energy without increasing rents.

“As Vermont moves to electrifying everything, what specific policies would you support to bring more in-state renewable energy to Vermont — including, would you support requiring electric utilities to use only renewable energy by 2030 and requiring far more renewables like wind farms and solar arrays to be built than is required today, especially here in Vermont? Ann Cummings said a problem with requiring utilities to use all renewable energy is that some people define renewable energy differently than others. “Do we consider hydro as renewable?” She said wind energy has been put off because the state doesn’t have a way to transmit wind energy from the parts of the state where it is generated to the population areas that need it. “When you get wind and solar, you get questions of environmental justice,” she said, emphasizing how people in the areas where they put wind utilities complain that the ones who the wind energy benefits from don’t have to see or hear wind towers. It is important to make sure alternative energy sources are equitably distributed. Jared Duval said he supports the Vermont Green New Deal and would co-sponsor the bill in the legislature. “We need to move to 100% either renewable or carbon-free electricity,” he said, adding that it is necessary to do it while also reducing pollution and costs. He said this means investing in how we are generating electricity and in moving people to electric transportation.  Jeremy Hansen pointed to Washington Electric Co-op in East Montpelier, a utility that has 100% renewable energy. But, he pointed out, not all of the energy is being generated in Vermont, so it would be an improvement to add more solar and wind fed into the grid. He also advocated using a “smart response” where, when everyone in the state gets high-speed internet, people could regulate the balance of energy sources powering their homes. He also said more state buildings should have solar arrays on top of them. And, there should be a requirement for all new construction to have a certain percentage of solar generation capabilities. Andrew Perchlik agreed 100% renewable should be required of utilities. He said using renewable credits from out-of-state should be reformed and that more renewable energy should be generated in Vermont. Wind energy in particular should be implemented. “Wind that is sited here in Vermont is really important,” Perchlik said, adding that he disagrees with the state’s anti-wind stance. There are sites suitable for wind power, Perchlik asserted, but he did not say where. Yet, even though offshore wind power will be available within the next 10 years, large scale wind farms would be important for Vermont’s energy future. Anne Watson agrees the state needs to move to 100% renewable energy feeding electric utilities, but wind turbines need to be able to use transmission lines so electricity can get to the populations where it can be most effectively used. Also, as transportation becomes electrically powered, the electrical grid is going to need a lot more storage. Watson said places of work should invest in charging stations so employees can charge their vehicles while they are at work during the day to make the ability to charge electric cars more equitable. Several other questions ensued, such as those addressing racism and environmental justice, clean water, plastic pollution, housing, and the working landscape. As could be predicted, none of the candidates support racism, environmental injustice, dirty water, plastic pollution, or an eradication of the working landscape (such as farming).  Nearly all the candidates had similar takes on how to balance housing with preserving the environment: Allow people who have single-unit houses to develop “mother-in-law” apartments (also called “accessory dwellings”) and try to promote housing developments in downtowns or village centers. To encourage this development plan, the state needs to work cooperatively with local municipalities to tweak Act 250 and local planning documents to allow such development more easily. Or, as Cummings put it, state and local officials need to get state regulations aligned with local plans.  “The devil comes out in the details, and the question is who pays the price. Right now it is the people with the least ability to defend themselves and usually translates to the people with the least amount of money or power and we need to do something to turn that around,” she said.
UNDERWRITING SUPPORT PROVIDED BY