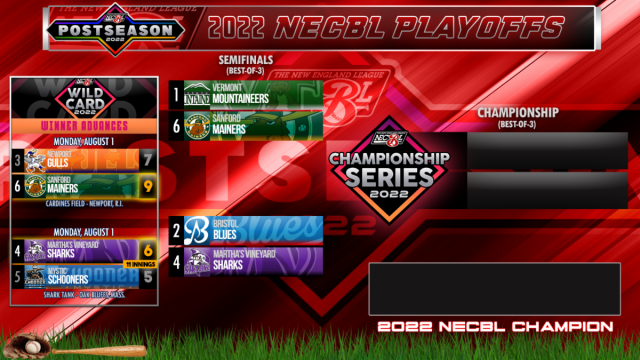 The New England Collegiate Baseball League (NECBL) semifinals begin tonight (August 2) after the #6 Sanford Mainers and #4 Martha’s Vineyard Sharks won their matchups in the wildcard round to advance to face the #1 Vermont Mountaineers and the #2 Bristol Blues, respectively, in the best-of-three series. The winning teams will meet in the Championship Series for the right to hoist the Fay Vincent Cup. #1 Vermont Mountaineers vs # 6 Sanford Mainers The top-seeded Vermont Mountaineers (32-12, league leader and North Division winner) will host the six-seeded Sanford Mainers (22-22, third wildcard) for the first game today, Tuesday Aug. 2, at Montpelier Recreation Field at 6:30 p.m. Game two will be Wednesday night at Goodall Park in Sanford at 6:30 p.m., and if necessary, a Game 3 will be played at 6:30 p.m. Thursday in Montpelier.  In the first meeting of the season between these two teams, the Mountaineers swept a doubleheader with 2-0 and 4-2 scores. Mountaineer’s third baseman Ben Williamson (William & Mary) was 3-for-4 at bat with an RBI and a run along with a .500 batting average in the second game of that doubleheader.  Since then, the Mainers garnered one win over their six meetings, as Vermont claimed a 5-1 record between the teams. The Mainers shut out the Mountaineers in their lone win, with Bryce Afthim (Southern Maine) pitching all 9 innings only allowing seven hits and a 0.00 ERA along with five strikeouts.  The Vermont Mountaineers clinched the division early on and by the end of the season, took the top spot in the league with 32 total wins, tied with the 2016 Newport Gulls and this year’s Bristol Blues for the most wins in a season.  Stephen DiTomaso (George Washington) led the Mountaineers offensively with five home runs and 25 RBI on the season with a .260 batting average. Not far behind in both categories were Tom Ruscitti (Fairleigh Dickinson) and Tyler Cox (Dartmouth). Ruscitti was second in home runs with three and Cox was second in RBI with 22. That trio helped the Mountaineers to be third in league batting average with .260 and second in the league in RBI (239). On the mound, Brendan McFall (Tufts) has earned a league leading seven wins for Vermont, while Christopher Kahler (George Washington) led the team with most innings pitched and 38 strikeouts.  The last postseason appearance for the Mountaineers was back in 2015, when they took the Fay Vincent Cup.  The Sanford Mainers snagged a playoff spot at the last minute with a 4-2 win against the Keene Swamp Bats on the final day of the regular season. After going 1-10 at the beginning of the season, the Mainers closed out with 21 wins out of 34 games.  The Mainers were led offensively by Quinn McDaniel (Maine Orono), who paced the team with eight home runs and 30 RBI and were top 10 in both categories in the league.  On the mound, brothers Bryce and Brady Afthim (Connecticut) led the team to a top-five opponent batting average (.222) and held teams to a league low .292 slugging percentage against. The Mainers’ last playoff appearance was in 2016, when they fell to the Mystic Schooners. They won the title in 2008 by defeating the Newport Gulls, and in 2004.  #2 Bristol Blues vs #4 Martha’s Vineyard Sharks The second-seeded Bristol Blues (32-12, runner up in league, West Division winner) host the fourth-seeded Martha’s Vineyard Sharks (30-14, Coastal Division winner) at Muzzy Field on Tuesday, August 3, at 6:30 p.m.  The Sharks and Blues split their 2022 season series a game apiece. Each team defended their home turf, with Bristol shutting out the Sharks 4-0 on June 17th and Martha’s Vineyard topping the Blues at the Shark Tank 12-7 on July 8. The Blues claimed the West Division by a sizable margin, as they were ten games ahead, and also tied Vermont (2022) and Newport (2016) for the most wins in a season, with 32.  Bristol was fourth in batting average (.247) and RBI (196). Chaz Myers (Pacific) led the team in batting average (.377) and home runs (30) and was second in RBI (18) behind Derek Tenney (Hartford) who led with 25 RBI. On the mound, Mason Ulsh (Quinnipiac) had an ERA of 0.99 in 27.1 innings pitched and closer Luke Garofalo (Central Connecticut State) was also efficient with a .73 ERA and only allowing one run through 12.1 innings. The pitching duo gave Bristol the league best ERA (3.17) and allowed the second lowest slugging percentage (.304). The Blues are looking to make this their first trip to the championship series as an organization.  The Sharks fell just shy of the Coast Division title, losing out by one game to the Newport Gulls. The Sharks exploded in the final 29 games as they won 22 of them with a record of 8-2 in their last 10 to secure a wild-card spot.  The Sharks have been consistent all season in both pitching and batting, with the fourth best ERA (3.69) and third lowest opponent batting average (.221), along with the second-best batting average (.274) and third most runs scored (256). Camron Hill (Georgia Tech) and Alejandro Torres (Miami) have the team’s best ERAs of 0.75 and 1.28 respectively. Hill is also the leader in strikeouts (41) with Stephen Quigley (Connecticut) just behind with 37.  Michael Snyder (Washington) led the league in batting with a .406 average. Snyder also led the team in RBI with 31 and in runs scored (33), while Cavan Brady (Wheaton) batted .382 for the Sharks.  The Sharks made it to the championship series in 2019, when they were the runners-up to the Keene SwampBats, and are still looking to win their first Fay Vincent Cup.  The next matchup after today will be held at the Shark Tank on Wednesday, August 3, at 7 p.m. If the series is tied after that, both teams travel back to Muzzy Field for Game 3 on Thursday, August 4, at 6:30 p.m.
UNDERWRITING SUPPORT PROVIDED BY