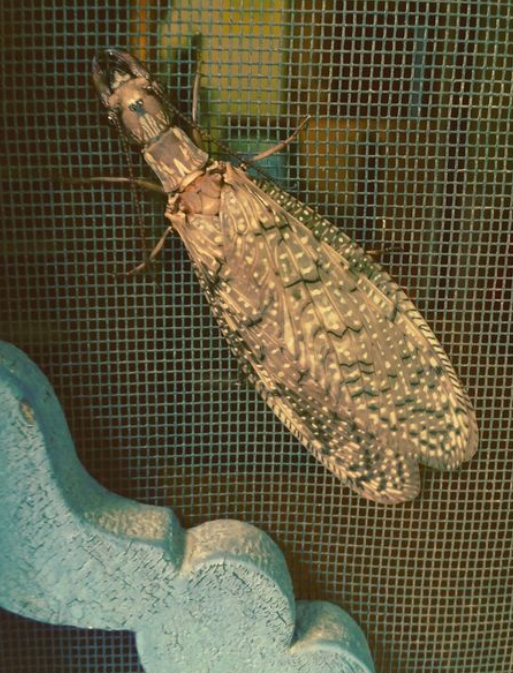 By Laurence J. Sasso Hardshell beetles appear out of the dusk flying at the speed of bullets. They thwack against the back porch light. Moths thick as snow swarm outside the screen. Small green insects — butter soft — smear the pages of the paper. Things with long feelers and fierce looking mandibles (fang-like appendages) cling passively to the clapboards. Later someone explains they are dobsonflies, mean-looking four-inch-long bugs that live so briefly after they emerge from the river that they never eat. Their only purpose once they change from a larva is to breed. They have two or three days to mate and then, successful or not, they die. In hot July they come out from under rocks in rivers and streams and fly feverishly in quest of love – or whatever dobsonflies call it. Somewhere a radio burbles a brook of words. The Red Sox are playing, and in the semi-darkness the family talks and falls silent, banters and laughs, and the ball game runs under it all like a bass guitar anchoring the melody of a timeless song. The dog lifts his head, whimpers, and swallows a growl. A cat or a rabbit must be crossing the back lawn. A rope of fur and bone, his tail pounds the floor. The smell of new hay and musty wet loam drift through the screen. The breeze rises and falls, a melody wafting into the porch. Pepper clouds of tiny insects swirl in the ring of light from the reading lamp beside the rocker. The single bulb glows with a peach-colored penumbra. It forms a lonely pool surrounded by the dark. Ice tinks the side of someone’s glass. Cold tea. This is not a time for television or air conditioning, or weighty reflection. Summer is abundant and green and fecund. Hydrangeas brush against the screen, snare drum and wire brush. The untrimmed syringa gloats above the roof line. Frogs croak in a distant swamp. In the yard a possum or racoon displeased by the dearth of leftovers drags the cats’ pan over the rocks. The dog raises one ear and looks from one face to another, lowers his eyes again. The banging stops. Every four or five minutes an automobile goes by. The tires squeal on the sharp curve. Flotsam from car-born conversation breaks loose and bobs unbidden into the privacy of the porch. Fragments and phrases float out of the humid blackness and hang a moment amid the family babble. “She never said it” or “So, I told him,” or “They’re gonna wish they never” blare out of nowhere and stop the porch talk dead a second. Two beats later it resumes, amused. There is no wish to know the time or make it count. There is no urgency or angst. Hour gives way to hour, waves following each other in the tide. Insects, people, dog, and cats, and the other creatures of the night are concentric circles in the dark, and the moon is a crescent slash, a can opener’s clean cut in the tin of a black, black sky. Outside the rim of lamp light people come and go. Young replacing old, old slipping quietly away to bed, the circle shrinking and swelling, summer in full flower. There’s something eternal about July nights. Laurence J. Sasso, Jr. is the former editor of a chain of weeklies in Rhode Island, where he currently writes a column for the Valley Breeze newspapers and is working on his second book of poetry. He is a frequent visitor to the Montpelier area. He thinks he might be addicted to maple creemees.
UNDERWRITING SUPPORT PROVIDED BY