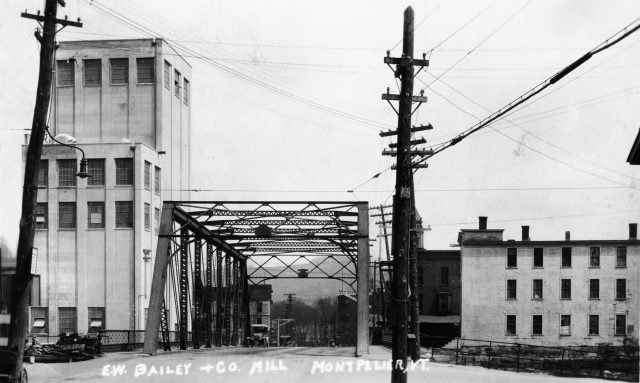 One hundred and ten years ago, the entrance to Montpelier’s downtown was filled with vertical structures, a stark contrast to today’s spare appearance. Cars traversed a wide 1898 Pratt truss bridge over the Winooski. The E.W. Bailey grain elevator stood sentinel on the west side of the north bank while the three-story National Spring Clip Company building stood on the east side. The Tomasi block was on the far side of the railroad tracks, while the tower of the new city hall hid behind a line of telephone poles. The grain elevator was demolished in 1965; the bridge was replaced in 1976, and the Tomasi block was removed in 1988. The “spring clip” company moved to 1 Granite Street in 1918 and rebranded itself as the National Clothespin Company, staying in business there until 2003. The company’s original building was demolished sometime prior to 1962, when the building that now houses Sarducci’s was moved into place.
UNDERWRITING SUPPORT PROVIDED BY

‘A Thanksgiving When the Land Gives Thanks for Us’