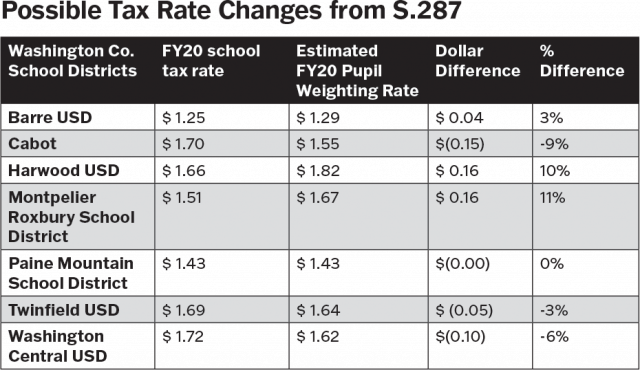 Montpelier Roxbury Public School (MRPS) taxes could increase by 11% thanks to a bill recently passed by the Vermont Legislature and signed by Gov. Scott. The bill, S.287, changes the state’s complicated school funding system in order to assist districts with high numbers of students in poverty, learning English (or both), as well as in rural school districts. The new funding system enables those districts to spend more, but may have the opposite effect locally. S.287 will cause homestead school tax rates and income-sensitized tax rates to drop in some districts and increase in others starting July 1, 2024, the start of fiscal year 2025. The rate changes depend on decisions by local voters after their tax capacity is either increased or reduced by the legislation, which changes new pupil “weights.”

The Legislature’s Joint Fiscal Office (JFO) has prepared homestead property tax change projections, based on spending two years ago. The projections show that the impact on local school districts varies. While only estimates, the projections suggest the direction of future rates, the JFO told The Bridge. Homestead tax rates in the MRPS could theoretically increase by 11% as a result of the education funding changes, while Washington Central (U-32) could see a 6% decrease, Barre could have a 3% increase, and Harwood could experience a 10% increase. In districts with big increases, the law calls for rate changes to be phased in. Statewide, some of the largest tax rate increases could be in higher-income school districts such as Pittsfield (+26%), Norwich (+22%), Thetford (+17%), and Champlain Valley (+16%), according to projections. The biggest tax rate decreases could occur in larger urban districts such as Winooski (-26%) and Burlington (-16%), and in small rural districts such as Westfield (-35%) and Charleston (-28%).

Washington County Senator Andrew Perchlik (D/P), who serves on the Senate Education Committee that helped craft the bill, confirmed the bill will hit higher-income districts harder. “That is where the evidence led us,” he said. “Higher income students don’t cost as much to educate.” He said that during the legislative session he showed projected rate changes to MRPS Superintendent Libby Bonesteel, and to the Montpelier City Council, and was surprised that he received no negative feedback on the rate changes, despite what projected increases could mean to local taxpayers.  Perchlik said he and other legislators hope that school districts being helped by the new pupil weighting system will increase spending, but that is up to each district and its voters. It also remains to be seen whether districts such as Montpelier Roxbury that are hit with higher tax rates will trim spending. If they do not cut, and the benefitted districts increase their budgets, the result could be higher overall education spending in Vermont and potentially higher taxes.

S.287 adopted recommendations from a study performed by a team of academic researchers for the legislature. The report concluded that current pupil weights for students in poverty, English Language Learners, and secondary school students were insufficient and additional weights will address further inequities.  The new funding system provides more capacity to educate students in higher grades, but with a greater differential than in the current system: an elementary student will be counted as one pupil, a middle school student as 1.36 pupils, and a high school student as 1.39 pupils. For weighting purposes, the new system will add 1.03 pupils to a district for every student in poverty and 2.49 pupils for each English learner.

Under S.287, an elementary school student not living in poverty and without language needs counts as one student for the funding calculation, which is based in part on spending per pupil. An elementary student from an economically deprived family who is also learning English will essentially count as 4.52 students (1 + 1.03 + 2.49) in the funding calculation, reducing the district’s spending per pupil and thus keeping tax rates lower. The law adds new weights for rural districts, and those districts with small schools. Extra weight goes for students in districts with fewer than 100 persons per square mile, and for schools in rural towns with less than 55 persons per square mile. The weights vary depending on density and school size. The Montpelier Roxbury district includes a potentially rural town (Roxbury) with a small school, but the district gets no rural or small school weights because the total population and total district square miles are considered together in calculating rural district assistance, eligibility for which is required to get small school assistance.

The new law also calls for a statewide “universal income declaration” form and asks the Department of Taxes to prepare a report by Jan. 1, 2023 examining steps necessary for Vermont to switch to an entirely income-based education finance system. The universal income declaration form may require Vermonters to annually disclose their gross income to help the state determine poverty levels in each district. Perchlik said some Vermont school districts already use such forms in an effort to increase free nutrition funds from the federal government, something the new statewide form could also do. Perchlik said he supports switching to an income-based education funding system. The idea seems to be gaining momentum in the legislature, he said, although he said some legislators think it could create problems. Another new law, H.716, creates a committee to examine an income-based system, an effort distinct from the Tax Department report. Perchlik said he favors a flat rate income system for education funding rather than graduated rates.

For Montpelier homeowners, the next few years will bring significant and in some cases painful changes to property tax bills. A reappraisal already underway reflecting the recent red hot real estate market will impact municipal and school tax bills sent out after July 1, 2023. Then the new school funding system, with likely higher school rates for Montpelier residents, will kick in after July 1, 2024, possibly accompanied or followed by a change to an income-based rather than property-based school taxation system for all primary homeowners.
UNDERWRITING SUPPORT PROVIDED BY