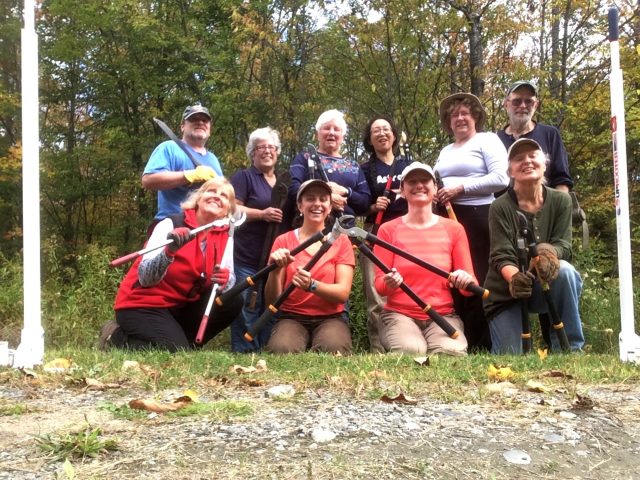 Several central Vermont area tree champions recently were recognized by the Vermont Urban and Community Forestry Program for stewardship of their community’s forests and trees. Amanda Garland of Barre City won the Leader Award. Garland planted and maintains a small apple orchard at the Barre City Elementary School. She also applied for and received funds from the Barre Rotary Club to establish apple orchards at five central Vermont schools. For the past 10 years, she has organized more than 100 volunteers to prune trees at the Orchard Valley School in East Montpelier. Garland was instrumental in establishing the Barre City Tree Stewardship Committee and the Community Garden Committee, and currently chairs both. Under her leadership, the Tree Stewardship Committee established and maintains Barre’s first tree nursery at the Barre City Dix Reservoir and has planted trees at Torquinio Park and other city locations. She has worked with the Barre Community Garden Committee to plant trees at two community gardens and is in the process of establishing a parklet on city land across from a downtown playground.  The Unsung Hero Award went to John Akielaszek, a long-time Montpelier Tree Board member. Akielaszek developed an emerald ash borer preparedness plan a decade ago, which was invaluable to town officials when the emerald ash borer was discovered in Montpelier in 2018. He continues to take the lead in revising and implementing the plan, which has served as a model for other Vermont communities. He was recognized as an unsung hero for his sustained efforts to increase public awareness of the emerald ash borer, and for his work in Montpelier to identify and manage this invasive pest. The Barre Town Weed Warriors received a Volunteer Group Award. Since 2019, the Barre Town Weed Warriors have gathered to remove Japanese barberry, honeysuckle, buckthorn, and Japanese knotweed from the Barre Town Forest. Their efforts have significantly reduced the non-native invasive plant population on the 380-acre property. —press release

The Vermont Women’s Fund, a committee-advised fund of the Vermont Community Foundation, has announced the recipients of its 2022 annual grant round. The fund, which is the state’s largest philanthropic resource dedicated to women and girls, chose 35 Vermont nonprofit organizations that reflect its mission to advance gender equity and justice. Of those, seven are headquartered in central Vermont. A total of $311,190 was awarded; of that, $60,240 is going to central Vermont based organizations. Central Vermont recipients of the Vermont Women’s Fund 2022 grant are: “We approach our annual grant funding as the engine that drives positive change,” explains director Meg Smith. “At the heart of this work are the nonprofits who deliver the services — and the opportunities they provide for women and girls in Vermont.”  —press release

Bobolinks, Savannah sparrows, and eastern meadowlarks are in decline because of the loss of appropriate grassland habitat. Landowners can make a difference by mowing fields later in the year. “People maintain fields and meadows in Vermont for a variety of reasons, from commercial hayfields and grazing pastures to simple scenic beauty,” said Doug Morin, biologist for the Vermont Fish and Wildlife Department. “Mowing is the most common way to maintain grasses, but if mowed early in the summer, grassland birds will lose their nests and chicks.” Bobolinks build nests among the grasses and wildflowers of fields and meadows. When bobolinks are present, other grassland bird species such as Savannah sparrows and grasshopper sparrows, may also be nesting among the grasses. Deer fawns, wild turkey chicks, and other animals take refuge in the grass and are also at risk by mowing too early. According to Morin, landowners who mow their fields for aesthetic reasons can maintain these fields and accommodate nesting birds simply by cutting later in the summer, preferably after August 1.  —press release
UNDERWRITING SUPPORT PROVIDED BY