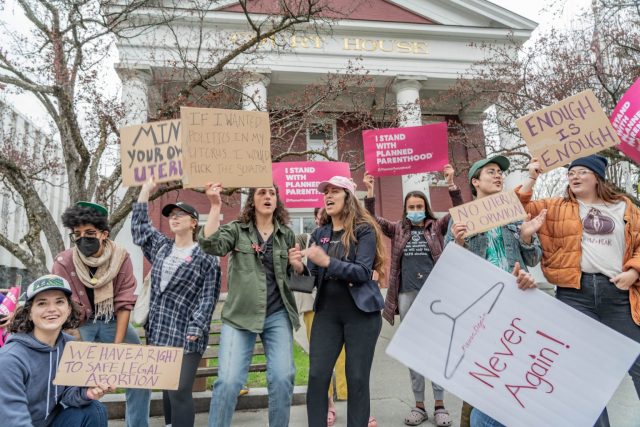 By Harry Chen M.D. The recent leak of the draft decision by the Supreme Court to overturn Roe v. Wade portends a major shift in almost 50 years of reproductive health care in America. As outrageous as it is on its face, it is a call to action for Vermont.  The Reproductive Liberty Amendment, formerly called Prop 5, is the proposed amendment to the Vermont Constitution that guarantees the right to personal reproductive liberty to ALL Vermonters. Vermont must lead the way and pass it in November. Its passage ensures access to the full spectrum of reproductive health care and Vermonters’ right to make their own decisions such as whether and when to become pregnant, use temporary or permanent birth control, or seek abortion care. It would be easy to categorize the Reproductive Liberty Amendment (RLA) as a political or moral issue, but at its core it is about public health. Reproductive health care is intensely private, personal, and should firmly be a matter between providers and patients. I saw this first-hand as an emergency physician for over 30 years. Unfettered access to quality reproductive health care is essential to a healthy population. The potential action by the Supreme Court overturning Roe v. Wade will have profound effects on the health of Americans. And while abortions will still be legal in Vermont, we need the stronger protections provided by the RLA. America already has the highest rate of maternal mortality amongst developed countries — double the rate of most high-income countries. Data from the CDC in 2020 show a disturbing trend: a 36.6% increase in just two years. The rate of increase is even greater for women of color or for women who live in poverty. Research suggests that banning abortion could increase maternal deaths by 21%. Every year, approximately 60,000 women suffer significant consequences from labor and delivery. This, too, will likely increase if access to safe and legal abortions is limited. Twenty-six states are poised to restrict access to abortion for over 36 million people if Roe is overturned by the Supreme Court. Removing access to safe and legal abortion will set the U.S. back even further regarding maternal health and worsen existing health disparities. Women and girls will be injured; some will likely die from illegal, unsafe abortions. This will take us back to a dark time in reproductive health in America. Restricting access to safe and legal abortions can have other profound effects. Analyses of the Turnaway Study, conducted in the past decade, showed that women who were denied abortions had poorer health outcomes, including mental health, and significant economic hardships, including poor credit, increased debt, and bankruptcy. This study shows that women who were denied abortions and had to carry an unwanted pregnancy to term experienced lasting impacts on their health, well-being, and finances. There were also negative effects noted in their children, including greater rates of poverty and delayed developmental milestones. These are outcomes we never want to see in Vermont. The Vermont Legislature has worked hard over the past four years laying the groundwork for the RLA. A constitutional amendment requires approval by two legislatures. Now it’s time for Vermont voters to do their share, step up and pass the Reproductive Liberty Amendment this November, enshrining reproductive autonomy in our constitution. Let’s get it done and send a strong message that Vermont believes in and will protect reproductive rights for all. Dr. Chen was Commissioner of Health in Vermont, 2011–2017 and is Treasurer of the Vermont for Reproductive Liberty IE PAC.
UNDERWRITING SUPPORT PROVIDED BY