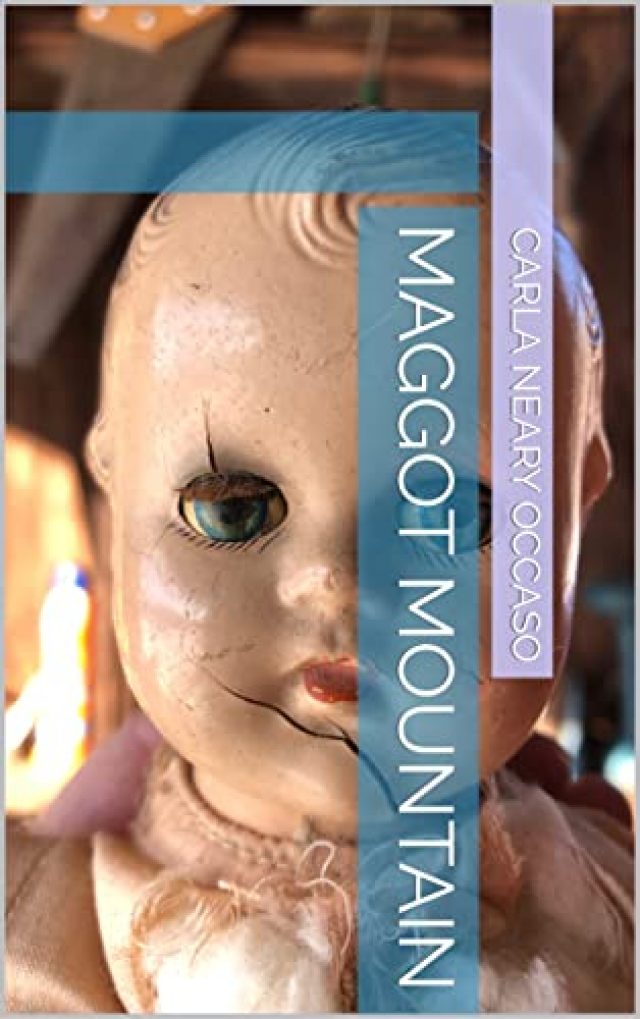 Carla (Neary) Occaso, contributing editor of The Bridge newspaper in Montpelier and Literacy Interventionist at Montpelier-Roxbury Public Schools, has published the short novel “Maggot Mountain.” The book, based in part on a true story, centers on a small-town reporter willing to risk everything to get a bigger story that sets her on the road to success. But then she is sucked into a labyrinth of self-doubt, questioning, and re-evaluating who she is and what she wants to become. Meanwhile, her frequent encounters with a hot game warden who has a sixth sense become a deciding factor in her life choices — as well as a deciding factor in her survival. Some of the novel’s characters are based on composites of real people, while others are completely fictional. For example, the young drug-addled man in the third section of the book is based on Occaso’s teaching practicum at the St. Johnsbury-based Community High School of Vermont, where she taught writing for nine months. His story is loosely based on combining the experiences she heard while teaching “autobiography” writing assignments to inmates at the Northeast Regional Correctional Facility. Additionally, several of her writing students read “Maggot Mountain” and weighed in on technical aspects of crime, police, and jail. “Maggot Mountain” was the culminating long-fiction thesis requirement for her Master of Fine Arts in writing from Goddard College in 2011. It is not so loosely based on her real experiences as a reporter for the Caledonian-Record in St. Johnsbury, the Lyndon Independent, and later for the Barre-Montpelier Times Argus. While working as a newbie reporter at the Caledonian-Record, Occaso was on the weekend desk when a double murder occurred. It was her job to cover it. Her duties covering that crime ended when Monday came, but she later followed parts of the case through court while working as a part-time contributor for the Barre-Montpelier Times Argus in the early- to mid-2000s. The late Vermont author Howard Frank Mosher also advised Occaso. He suggested she make some revisions, but also wrote to her “I read ‘Moon Mountain’ (a previous title) in two sittings and thoroughly enjoyed it … You write extremely well about the newspaper business, small towns, families, and, interestingly, children.” However, he cautioned her about how the overall plot may or may not work, even though it was absorbing and had a fast pace. Occaso, who had interviewed and written about Mosher multiple times, sent him her manuscript, in part, because her story takes place in the same fictional area name he invented for his novels called “Kingdom County” — presumably based on the name the Northeast Kingdom.  Regarding the name “Kingdom County,” according to Steve Zind, in a 2017 VPR commentary in the wake of Mosher’s death, “He (Mosher) reimagined the Northeast Kingdom by creating his own world, called Kingdom County, and telling the stories of its people in books such as ‘Disappearances,’ ‘Where the Rivers Flow North,’ ‘Stranger in the Kingdom,’ and ‘Northern Borders.’” “Not that ‘Maggot Mountain’ could by any stretch of the imagination be compared to the works of Mosher,” Occaso said, adding that she set her story in a place of the same name out of love for his stories and out of a sense of a shared setting and theme regarding the kinds of Vermont stories that don’t often get told. “Maggot Mountain” is published on Kindle Direct Publishing. It can be viewed at amazon.com/Carla-Occaso/e/B009HS9BZ6.
UNDERWRITING SUPPORT PROVIDED BY