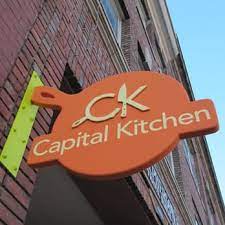 A popular kitchen goods store in downtown Montpelier is changing hands. Jess Turner has sold Capital Kitchen, 18 State Street, to Chris McDonald, manager of Bear Pond Books. McDonald will take the reins on April 1, Turner told The Bridge by email. “I’m not closing, I’ve sold the business,” she said. “I opened the store almost 14 years ago and it’s been so joyful, but I’m ready to move on to a new adventure. There are so many things that I want to do, so many new things to create, and it just feels like my time to move on.” Turner said owning the store has allowed her to get to know the community and that she believes the community will continue to support McDonald as the new owner of Capital Kitchen. Since announcing the news about selling, she said, she has received an outpouring of support.  “People are calling, emailing, and messaging me to tell me how much I’ve meant to them over the years, how grateful they are that I had the tool they needed (and the fun dish towel that they didn’t know they needed)! This is such a loving community, and I’ve felt so grateful and honored to be a part of it all this time,” Turner wrote. A favorite memory Turner recollects is when she opened in 2008 and, while wearing a white dress, received a large delivery of boxes, filthy on the outside. While moving the boxes, she got covered in dirty smudges. The next day, a “lovely old woman” brought a ruffled apron she had sewn so Turner could protect her clothing while unloading boxes. Turner also remembers enjoying the day-to-day interactions, chatting, and exchanging recipes. She enjoys the way people open up over cooking and baking.  “And I’ll always remember the many times that people popped in over the years just to tell me how much they like my window displays, how the colors brighten their days and their walks through downtown,” she said. Turner will be spending the summer with her daughter, who soon turns 10. During that time, she will be dreaming up her next big thing. As for McDonald, an email to him seeking comment resulted in receiving a message announcing, “After 20 plus wonderful years at Bear Pond Books, I will be moving on starting March 20. Please direct any future inquiries to Cora Kelly at cora@bearpondbooks.com.”
UNDERWRITING SUPPORT PROVIDED BY