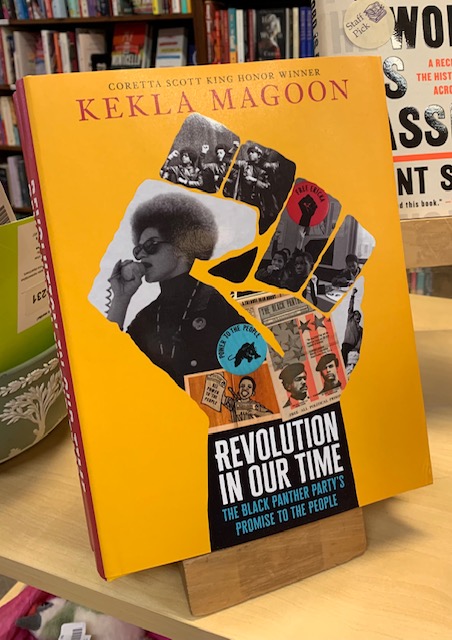 In her most recent book, “Revolution in Our Time: The Black Panther Party’s Promise to the People” (Penguin Random House, 2021), Kekla Magoon quotes Father George Clements, a Black Catholic priest, a civil rights activist who worked with the Rev. Dr. Martin Luther King Jr., and a friend of some members of the Illinois Chapter of the Black Panther Party. “The thing I really loved about the Black Panthers,” Clements said, “was that they refused to be ignored.” Talk about understatement! Founded in the 1960s, the Black Panther Party quickly earned a national reputation, parts of which vividly live on today. Magoon makes a strong argument that their reputation has been distorted since the beginning and that their legacy is much more important than has generally been recognized. Published in November, “Revolution in Our Time” was a 2021 National Book Award finalist and has won three awards: Michael L. Printz and Coretta Scott King author awards and a Walter Award Honor in the teen category.  “For many years, Americans have looked away from the Black Panthers’ legacy,” Magoon writes, “and because people have looked away, many have forgotten who and what the Panthers really were. “The Black Panther Party was a nationwide organization that existed in Black communities in the United States from 1966 until 1982. The Panthers played several roles: they were civil rights and human rights activists, militant revolutionaries, and community organizers, and they were also a political party. They taught Black Americans how to fend for themselves in a country that treated them like second-class citizens, where police officers and politicians often failed to protect people but abused their power instead.” Founded in Oakland, California, the Panthers initially called themselves the Black Panther Party for Self-Defense. Part of their plan was to arm Black people so they could defend themselves, and another was to “police the police” by following police around to make sure they were not violating the rights of Black people. As allowed by California law, they carried guns when they did this. Despite carrying guns and sometimes talking about “armed revolution,” Magoon argues that the Panthers wanted a social revolution, not a violent one. She notes that even though the mainstream civil rights movement preached nonviolence, its leaders condoned sometimes breaking unjust laws in order to make a point. Ironically, the Panthers, on the other hand, were careful about obeying laws and carried copies of laws with them while “policing the police.”  Magoon reminds us that the civil rights era was filled with violence — mostly violence from white supremacists and sometimes police against Blacks. One of the horrors of the time, of course, was the assassination of King, the ultimate champion of nonviolence. In an effort to downplay their gun-toting image, within a few years the Panthers dropped “self-defense” from their name and later “put [their] guns in the closet.” While media and politicians often focused on the image of the Panthers as angry Black men with guns, most members were women focused on serving poor Black communities. Their outreach included food kitchens, medical clinics, ambulance service, legal aid, and shoe and clothing programs — everything for free.  “The Panthers excited people, scared people, challenged people,” Magoon writes, adding that they also pushed for Black history education.  The book begins with a 60-page overview of the treatment of Black people from 1619 to 1965 that provides essential context to explain why so many people were so angry and frustrated. It closes with information about lasting contributions and key people, a timeline, glossary, and suggestions for further reading.

The Bridge’s Ad Director Rick McMahan took this photograph of Coretta Scott King on June 11, 1972 as she campaigned for one-term congressman Allard Lowenstein in Brooklyn, New York. At the time, McMahan worked as an office aide and campaign photographer for Lowenstein, while also a student at Goddard College in Plainfield, Vermont.  King, a civil rights leader, activist, singer,  and author was also the widow of Martin Luther King, Jr. “The Coretta Scott King Book Awards are given annually to outstanding African American authors and illustrators of books for children and young adults that demonstrate an appreciation of African-American culture and universal human values. The award commemorates the life and work of Dr. Martin Luther King, Jr., and honors his wife, Mrs. Coretta Scott King, for her courage and determination to continue the work for peace and world brotherhood,” according to the American Library Association website. Montpelier’s own Kekla Magoon recently won this award as an “honor book” for her latest work, “Revolution in Our Time: The Black Panther Party’s Promise to the People” (Penguin Random House, 2021), available for sale locally at Bear Bond Books.  —C.H.
UNDERWRITING SUPPORT PROVIDED BY