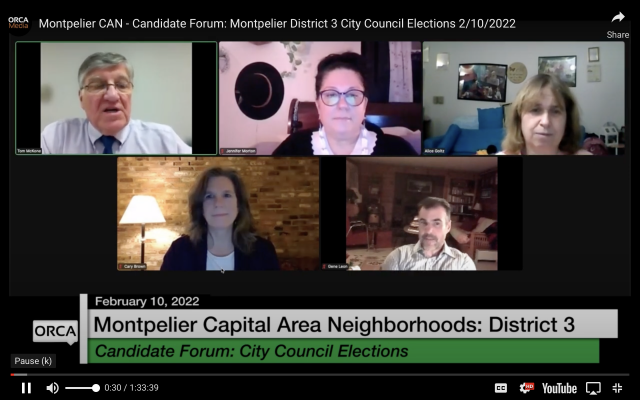 by Carla Occaso Montpelier’s District 3 has a hot and spicy election coming up on Town Meeting Day with four candidates vying for the two open seats on the city council. Below are condensed statements the candidates made at a recent televised program organized by Montpelier Capital Area Neighborhoods. The event can be found on ORCA Media at orcamedia.net. Tom McKone moderated. Districts 1 and 2 council seats are sought by unopposed incumbents Dona Bate who has represented district 1 since 2014, and Conor Casey who has represented district 2 since 2018. In District 3, Dan Richardson held the seat until Burlington Mayor Miro Weinberger named him to be the attorney for the city of Burlington in August 2021. Jennifer Morton, a social worker, was appointed to the post and now seeks election. Also wanting to finish out Richardson’s term is Gene Leon, an independent contractor and “Jack of all trades.”  Jay Ericson, who is not running again, holds the second district 3 open seat. Vying for his seat are Alice Golz, a school crossing guard, and Cary Brown, executive director of the Vermont Commission on Women. District 3 includes the area from Dog River Road over to the roundabout at the Barre-Montpelier Road, some of Berlin, Hill and Northfield streets, and points in town including Barre Street, and parts of Loomis, School, and State streets.  During the televised discussion, McKone introduced the event and explained that each candidate had two minutes to respond to prepared questions. Due to time and space constraints, The Bridge covered the first five questions of the evening.  Cary Brown, a 26-year Montpelier resident and the spouse of Montpelier City Clerk John Odum, started the opening remarks.  “I am really passionate in my belief that democratic government is an ideal way for a community to express its values and to make sure everybody in the community has their needs met,” she said, adding that Monteplier should “use our resources to address the values of the community.” However, Brown met a concern head-on that if she wins the seat, it will cause a conflict of interest since she is married to the city clerk. Brown vowed to recuse herself when discussing his portion of the budget to address this. Alice Golz said she has lived in district 3 for 12 years and wants to represent the people who are unrepresented on the council. “I want to speak to the people about their concerns and what they believe are unmet needs … and bring their concerns and needs to the table,” Golz said.  Gene Leon, an organizer with Capital Area Neighborhoods, said he has been a Berlin Street resident for six years, but has lived in the area for eight to 10 years. He has two children who go to school in another district. He volunteers at the Central Vermont Solid Waste Management District.  “I am really passionate about where I live and the concerns of the community,” he said, adding later, “like any relationship, you have to commit, dedicate, care, and love — most importantly … and I am prepared to do so.” Jennifer Morton introduced herself in her tribal language, and said she wants to use her voice for a positive impact for herself, her family, the indigenous community, the BIPOC community, and her neighbors. She said she is not a homeowner, and one of her biggest concerns is homeownership for families earning under $40,000 per year, especially families and single mothers. Morton is a social worker who has lived here for seven years. She has worked with the Washington County Youth Service Bureau, the Family Center of Washington County, and the Barre Community Justice Center, as well as the Vermont Commission on Native American Affairs. McKone then launched into his questions:

How would you go about understanding what district residents are most concerned about?

Brown responded she would use the internet, such as Front Porch Forum, social media, and Zoom. She would also like to arrange in-person gatherings. Additionally, she would reach out to those who are involved with Another Way and with school students. Golz said, “I would speak to them and arrange a time when I would be able to meet with them. I speak with a lot of people as a school crossing guard, so I get to know some of their feedback and what they think. I would be willing to speak to the people and represent them as best as I can.” Characterizing current public communication as “a disaster,” Leon said he would implement a survey system, publicize his email address and publish a monthly newsletter. Morton said she would go around to neighbors in person and spend time with them. She would have talks with them where they live, such as in her apartment complex. “I welcome conversation from my neighbors and I really want to know what is important to them.”

What would you want the city council to do about homelessness, housing insecurity, and access to affordable housing? Please share an example of a model housing development that would have your support.

Brown responded that she loved the idea of a concentrated hub of resources in one place. She listed a few ideas where such a place could exist, such as the old Barre Street Rec Center. She also pointed out it is important to find out the reasons for each person’s adverse circumstances, since everyone is different. “We need more housing — and housing people can afford to pay for.” Golz said she would like the council to “problem solve” to address this matter. There are many different options, such as public options, mixed housing, and a tiny house village, for example. Leon said homelessness has to be tackled one person at a time, and that action is needed. “We treat homeless animals better than we treat people,” he said. “Solutions could include palette housing or tiny homes, but meanwhile people need a shower, a place to charge their phone, and a physical address to put their belongings … not to mention a place to go to the bathroom.” Morton said the city needs a one-stop place where people can get all their needs met. She agreed it could take place at the old Rec Center on Barre Street.

What is your view on Montpelier’s increasing property taxes?

“Well, obviously, Montpelier’s taxes are really high,” said Brown. “They are so high and no one is going to argue with anyone on that … There are a lot of complex reasons for that. Part of it is we are supporting infrastructure and a city that serves a lot more than just the 7,800 who actually live here.” As for her ideas for addressing this? Brown said the council should be cautious about raising local taxes and they should also analyze what the community needs and where the money is coming from rather than the other way around. Golz said Montpelier City Council should look at other communities to see how they are dealing with their taxes. “I think Montpelier’s property taxes are the highest in the whole state of Vermont,” she added. “The one word to answer that question is ‘outrageous,’” Leon said. Problems include a decaying infrastructure, roads, housing, and maintaining government departments. He said the city council needs to look at budgets with a creative eye toward lowering taxes rather than simply approving them. As someone who doesn’t own a home, Morton said she is just learning about property taxes. People tell her they are extremely high in Montpelier — to the point where people cannot afford to live here. This makes her sad because some people who have lived here all their lives, such as the elderly, can’t afford their mortgages. She wants to learn more about property taxes and what the money goes for.

What would you want the city council to do to improve the quality of life in your district?

Brown said she feels like the quality of life is pretty great in many ways. “St. Paul Street is the weird little thumb of district 3,” she said, but over in the Berlin Street area traffic is a problem. Traffic backing up at National Life is also a problem. Some parts of district 3 have challenges with walkability, which she would like to fix. Golz said the council needs to listen to people and find out what they need, as well as to come up with ideas on how to solve traffic problems and improve the process for cleaning up snow. Leon said his neighbors are mostly concerned with speeding on Berlin Street. He went door to door to make sure people knew when public hearings were being held on the matter. People showed up with data, and as a result, they lowered the speed limit, he said. Leon also mentioned a need for restructuring the districts. Morton said her biggest concern is over the roads in Montpelier. She has gotten several flat tires due to the potholes. Also a problem is traffic when schools are getting out. “The traffic issues are growing.” Also, walkability is a concern, but she and her kids love the new walking paths that have recently been implemented.

If the bond issue for purchasing the Elks Club property passes, what types of uses would you envision for it, and what type of process would you use for developing that vision? What should people do for recreation if it doesn’t pass?

“I am a big supporter of this,” Brown said. “I hope it does pass. It would be nice for Montpelier to have some control over a big piece of land.” She also pointed to an example of her hometown in Massachusetts where the town bought land and built an affordable housing development. If the city owns the property, they can better control what gets developed, she said.  Golz said she would like to see clean affordable housing, including for people who are unhoused. She also suggested using the Barre Street Rec Center for housing the unhoused. People who are unhoused or of low income do not have places to go for recreation. Leon said the city council should be clear about explaining what the bond is with details and potentials. “I am mixed on this topic,” he said. He acknowledged the city needs affordable housing, and that the Barre Street Rec Center is outdated, but, he wondered, would it cost more to renovate the Barre Street facility or build a new building? Morton said she hopes the property is used for housing. ”I know everybody has their own thoughts, but housing is an issue here. It is going to continue to be an issue,” she said. If it doesn’t pass, Morton said the city needs to either improve the existing rec center or have another one for the children to go to. The current one isn’t safe or accessible.
UNDERWRITING SUPPORT PROVIDED BY