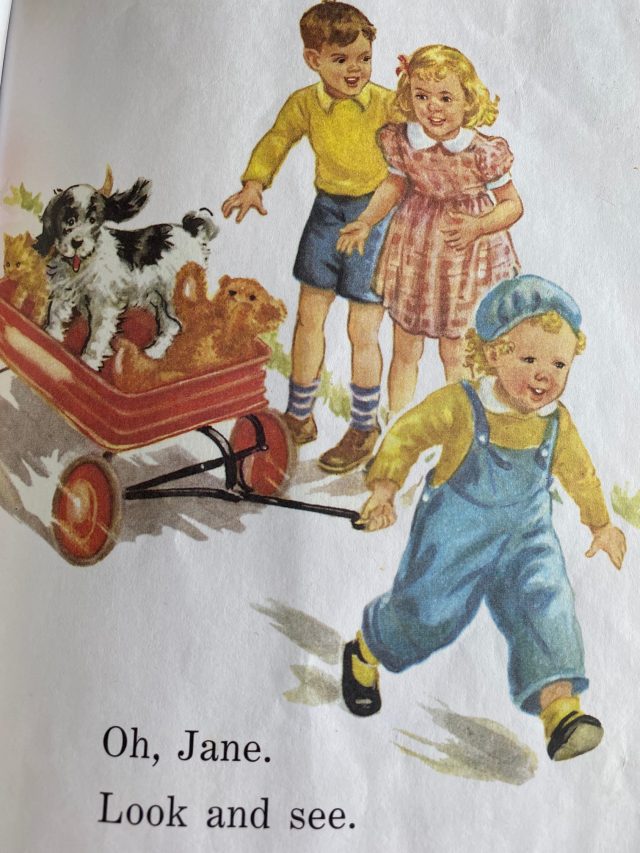 If you remember when hula hoops hit the toy market and still know all the words to theme for the TV show “Davy Crockett,” you probably learned to read from a set of books published by the Scott Foresman Company about an iconic pair named Dick and Jane. The texts were the predominant readers in public schools from the 1940s through the 1960s. Because the books formed the basis of a reading program, they, and texts like them, came to be known as basal readers.  Unlike the old McGuffey readers, the books were designed to feature characters and situations with which children could identify. But the series came under fire almost from the beginning. The program didn’t officially teach phonics but word memorization, and the stories were often considered “dull and insipid.”  Over time, it also became obvious that many children would not identify with the idyllic lives depicted in the stories. The families living in three deckers in Boston and housing projects in Chicago didn’t inhabit the bland world of these readers. Neither did the children of sharecroppers in Mississippi, or many children of color, although in the 1960s, the publishers did add a Black family to the neighborhood.  What about the children of rural Vermont? What did they think about the suburban lives of Dick and Jane? Natalie Kinsey Warnock, a writer who grew up in the Northeast Kingdom, didn’t find the books especially appealing. During recess, she would explore the classroom library looking for other books. “I was hungry for something else to read, for the opportunities I had at home to read histories, anthologies, and biographies.”  She knew the school texts were one way to become a reader, but the setting wasn’t a familiar one. Her own home had electricity only on the first floor, and her mother would sit on the stairway at night reading to Kinsey Warnock and her siblings by flashlight. In the Dick and Jane series she saw pictures of sidewalks and street lights, which you weren’t apt to find in the Vermont countryside.  “I wondered what those things were,” she said. On the other hand, you could be drawn to the books just because your life was nothing like what you saw on the pages. A central Vermont resident remembers her “wistful reading of Dick and Jane in the 1970s, as a poor hippy kid growing up in the countryside. I yearned for the perfection of a Dick and Jane home.”  Mary Carlson of Montpelier, “almost a fifth generation Vermonter,” grew up in the house in which her father was born. She remembers the Dick and Jane books as “all right and I really wanted to learn to read. My parents were great readers, and our house was full of books.”  Tanina Garabedian came from the small city of Newport and has only fond memories of reading aloud from Dick and Jane. It didn’t hurt that she loved the idea of becoming a better reader than her older brother.  A Montpelier resident who attended school in Stowe back in the 1950s, when it was still mostly farms, found the readers underwhelming and the characters unfamiliar. Her home wasn’t in a housing development but in a village apartment with the town’s telephone switchboard operator living above. “But, maybe, she says, “the reason I didn’t like those books was because I didn’t like anyone telling me what to read. I’m an avid reader now, though. It (the program) obviously worked.” The early popularity of basal readers prompted other publishing companies to create their own programs. But whether you were reading about Alice and Jerry, Jack and Janet, or Dick and Jane, the format was the same and their flaws were similar.  The basal reader systems began to disappear, and by the 1990s, they were hard to find. Vermont teachers now use newer methods and materials, including children’s literature featuring diverse characters as well as diverse authors. But no matter how you felt about the readers when you were younger, coming across one of the books at a garage sale or in an antique store can evoke powerful memories of childhood. And for a few minutes, that time may seem as golden and trouble free as the lives of Dick and Jane.
UNDERWRITING SUPPORT PROVIDED BY