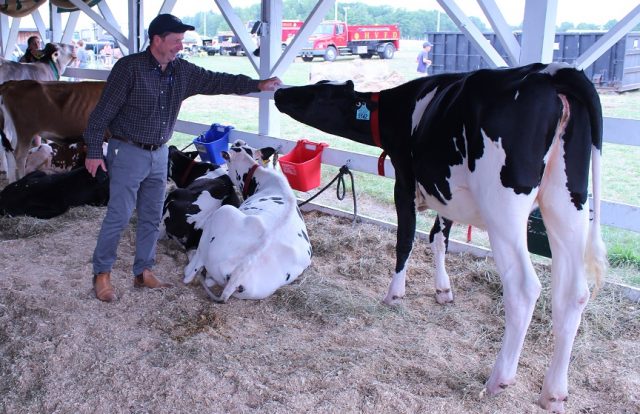 So I fully intended, at the request of my editor, to write about New Year’s resolutions for this issue. New Year’s resolutions, of course, are very important because when we break them we feel bad about ourselves.  I know. I still can’t speak French (a resolution I made back about 2002) and I think I felt bad about that for at least an heure or maybe a jour. (Whoa, I guess I did learn a little!) And I still don’t go to the gym enough — a resolution I make almost every year on New Year’s Eve and break New Year’s Day. But the opposite is also true. If we manage to keep a resolution and actually alter our behavior, we feel better about ourselves. That’s why this year I was determined to make a resolution I would keep: I resolved to break any other New Year’s resolutions I made, thereby guaranteeing my success. And I feel better about myself already. But I digress . . .  As I was starting to write about New Year’s resolutions, I came across an article about cows in my favorite science news magazine.* As you may know, I am very fond of cows and continue to be amazed by them. In the past I’ve written about cows doing all sorts of tricks and about a small herd of cows that apparently was beamed up to a waiting Romulan starship from the road at the end of my driveway. I’ve even pondered the metaphysical question “If a ‘cow’ is the female version of an animal, as opposed to a ‘bull,’ which is the male version of an animal (as in a bull moose and a cow moose), what is the name of the animal cows are cows of?” Now comes news that some researchers in Auckland, New Zealand, are trying to — get this — potty train cows. This work is in its infancy, so for the moment they are only focusing on getting cows to urinate in special bathroom stalls. They are obviously leaving the larger problem of what we back on the farm called “pasture pancakes” for later research.  Now, I know what you’re thinking, “But Lare, what’s the point of that? Cows are grazing animals that enjoy pastures. Can’t they just be allowed to wander about and let nature take its course?” Well, according to the author, when you look at the numbers, capturing all that pee makes sense. Cow urine is high in nitrogen and phosphorus and could be turned into fertilizer. Plus, when it mixes with the aforementioned pasture pancakes, the resulting mess emits ammonia, which is a pollutant. And if the urine gets into waterways, it can create nitrous oxide, which, as we all know, makes us laugh. Just kidding! In addition to producing giddiness, nitrous oxide is a potent greenhouse gas. And according to the author, cows are no slouches in the pee department, urinating between 2 and 20 times a day and producing up to 15 liters of urine. That can result in a lot of ammonia. So Lindsay Matthews, an investigator of animal behavior at the University of Auckland, and some colleagues decided to see if they could potty train 16 calves. They did this by constructing a special bathroom stall that had artificial turf flooring. In Monty Python fashion, they dubbed this the “MooLoo.”  They enclosed the calves in the stall and each time a calf peed it received a treat. Once they were conditioned, the calves were allowed into the passageway leading to the bathroom stall. Each time a calf made its way to the “MooLoo” and peed it received a treat. If it peed in the passageway, it received negative reinforcement by being spritzed with water. According to the report, within 10 days, 11 of the 16 calves were potty trained.  The ramifications of this are immense. According to Matthews, if cows can be trained to pee in latrines and 80% of the urine were to be collected from those latrines, ammonia emissions might be cut in half and groundwater contamination could be reduced. Beyond that, think of the possibilities if Bossy replaced a cat or dog as a house pet. Sure, you might have to add on to your house to make room for a Moo-Loo, or at least get a larger litter box. And you would have to move the good china to a safe place — Bossy may not be a bull, but her tail has a long reach. And the prospect of a 1200-pound animal curling up with you at the end of your bed at night might seem scary. But think of the upside. If she didn’t crush them, your feet would be very warm at night (Forget the notion of a frigid “three-dog night.” One Holstein is all you need). You’d have a lot of fertilizer for your garden. And you would have a ready source of fresh, warm milk for your morning coffee. You can’t get that with Fido. *Temming, M. Science News, Oct. 9 and 23, 2021, p. 24.
UNDERWRITING SUPPORT PROVIDED BY