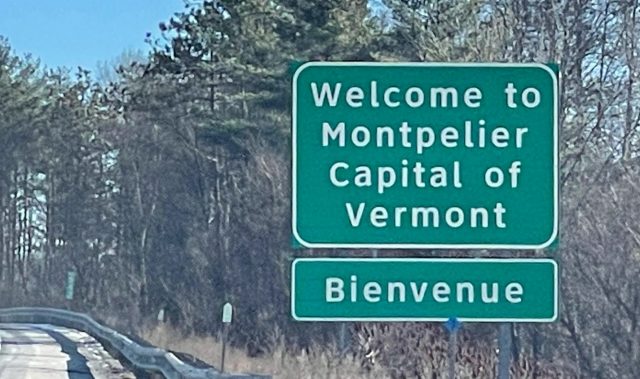 By Lauren Milideo “Welcome to Montpelier Capital of Vermont” proclaims a sign along Interstate 89. “Bienvenue.” But as drivers approach Montpelier, their senses may have a less-than-welcoming encounter: the smell rising from Montpelier’s water resource recovery facility, just off I-89 where cars leave the highway and head for downtown. Ky Martens moved to the area in May, and says the smell has been noticeable for that entire time, though less conspicuous in the summer. Martens, a Barre resident, drives past the area a few times a week, and while they do not notice it every time they drive past, Martens estimated that the odor is present about nine out of 10 times as they pass the plant. Waterbury resident Martha Nowlan also started noticing a strong odor a few months ago, particularly as she traveled along Dog River Road near I-89. Until that point, Nowlan said, she hadn’t even known where the plant was.  “I thought the river really smelled bad in Montpelier,” she said. It was not until Nowlan’s girlfriend pointed out the plant as the smell’s source that Nowlan realized it was not a polluted Winooski River that was stinking up the area around Dog River Road. A resident of central Vermont for six years, Nowlan notes that the plant has not always emitted such a strong odor.  “It didn’t just pop up out of nowhere,” she said. “Something changed.” As a wastewater treatment plant, the facility typically does smell a bit, acknowledged Kurt Motyka, deputy director and engineer of Montpelier’s Public Works Department. In general, Motyka said, the smell comes from the breakdown of waste processed through the plant. But things have changed in recent months, and locals have noticed. The plant has received complaints about increased odor, Motyka noted. “We are well aware of the odor issues at the plant.”  In 2020, he said, the plant underwent several improvements including upgrades to the plant’s anaerobic digesters (where microbes break down waste in an oxygen-free tank) and better heating of waste material, which, Motyka noted, can “optimize methane production and breakdown of anaerobic materials.” Another upgrade entailed improved air exchange, venting more air from inside to the outside. The upgrades cost  $16.75 million, Motyka said. Of that, $2.3 million was paid by a state of Vermont Pollution Control Grant, and another $2.589 million came from a United States Department of Agriculture grant.  The plant can accept more septage since the upgrades, completed by Energy Systems Group of Indiana, Motyka said. The changes also allowed the plant to begin accepting a variety of materials collectively referred to as “high-strength organic waste,” including restaurant oil and grease as well as dairy and brewery waste.  “It has a different odor than traditional wastewater,” Motyka said. “It’s food waste.”  “We did anticipate that there could be potential that that could be a problem,” he noted.  The plant asked Energy Systems Group for recommendations to improve the situation. For now, Motyka said, the plant may add chemicals to prevent the formation of hydrogen sulfide (a notoriously odiferous gas) during organic waste breakdown. Longer-term, another plant upgrade may be needed. A new biosolids dryer could yield material that is 90 percent dry and 10 percent water, as opposed to the current system, which yields treated material that is only 30 percent dry (and 70 percent wastewater that must go through the treatment plant). This new dryer would have an odor control system. Another, less expensive, option would be to bring in a skid-mounted charcoal filtration system. But the first step, Motyka said, is a proposal from consulting engineer Brown and Caldwell Engineering of Andover, Mass. to assemble air quality and gas samples to determine where the highest concentrations of smelly gasses are present. Despite unpleasant scents wafting from the upgraded plant, Motyka said there are upsides to the recent changes at the plant. Better ventilation means more of the smell leaves the building, improving air quality and working conditions for those inside.  Furthermore, “We’re utilizing the high-strength organic waste to make methane and then using the methane to heat the building,” replacing fuel oil, saving money and energy. New materials coming into the plant also entail a “tipping fee,” which varies depending on volume. The plant has received $89,870.75 in tipping fees to date, Motyka said. He also said Montpelier received a 2021 APWA National Award from the American Public Works Association New England Chapter for the project. It is not clear how much methane is being captured, Motyka said, as meters installed during the upgrade were improperly calibrated and did not yield usable data. Data will become available in the future, however. Most of the waste coming to the facility comes from Vermont, said Motyka, but the contracts are with haulers rather than waste producers. Hauling companies track where their waste comes from, Motyka noted, but the plant does not. The Montpelier plant accepts waste from several haulers, including Wind River Environmental and Kingsbury companies. Septage received tends to be lower in the winter, Motyka noted. The plant will be taking in more high-strength organic waste soon, he said, reaching 75-percent capacity of the digestion system within about three weeks.  Smell mitigation will happen in the future, so for now, neighbors and drivers-by will continue to get hit with foul odors. “Sometimes the whole car fills with it,” even with the windows closed, Martens said. And “opening the windows doesn’t help because it’s in the air.”
UNDERWRITING SUPPORT PROVIDED BY