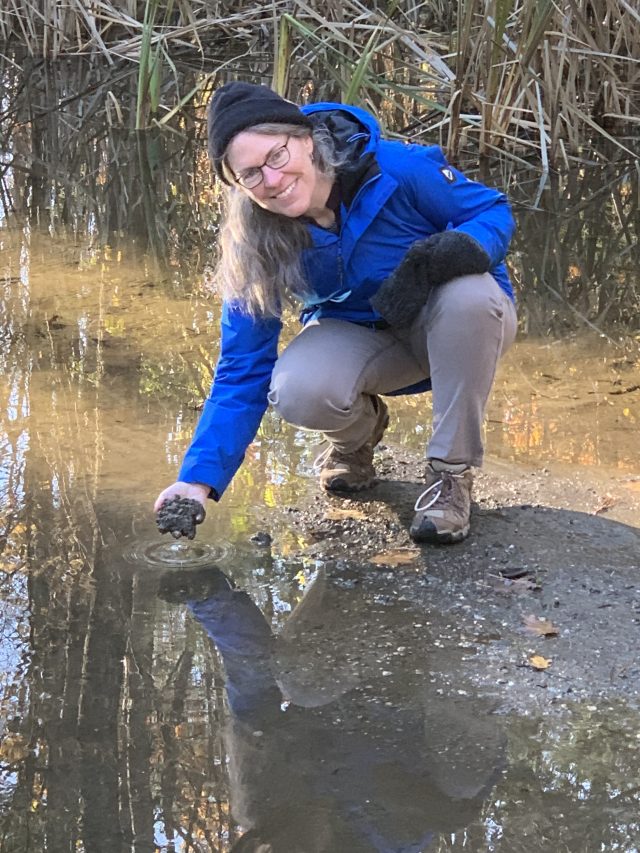 Shawn White shouldn’t have been able to stand several feet off the shore of Hubbard Park’s frog pond without hip waders. But there she was, in everyday hiking shoes, squatting on a buildup of sediments that belonged in the nearby gravel road, staying dry. Over time, the decades-old pond by the park’s Winter Street entrance has filled with sediment deposited by stormwater runoff from the park road. The juxtaposition of the constantly eroding road and the dying pond demonstrates a larger problem: How unmanaged stormwater runoff damages ponds, lakes, and rivers throughout the state, including the Winooski River and Lake Champlain. Grant-funded road improvements happening this month in Hubbard Park highlight that road damage is just the beginning of the problem. “The road is a perennial headache for us,” said Montpelier Parks Director Alec Ellsworth. “We’re always battling erosion there.” Ellsworth said the stormwater infrastructure project will redirect and slow stormwater flow, catch sediment at several points, and crown the road to run water into ditches. In addition to those improvements, the intersection where the road coming in from Corse Street meets the road coming up from Winter Street — another place with constant erosion problems — is changing from a “Y” to a “T”.  “There’s an incipient effort to make the Winooski River a tourist destination for local people and tourists,” White said. “If we’re going to use the river more, water quality becomes a bigger issue.”  White, project manager for Friends of the Winooski River, said that excessive sediment from roads, driveways, and poorly landscaped properties, pet waste, cigarette butts, fertilizers, motor oil, and other pollutants end up in streams and storm drains that flow into the Winooski and on to Lake Champlain.  Montpelier has over 150 piped drainage outlets that empty stormwater into its rivers and streams. Besides not having obvious pollutants, White said, a healthy river or stream has loose gravel and rocks on the bottom, banks held in place with woody vegetation, and shade trees. It is fed partly by groundwater, which is cooler than surface water. Cool water holds more oxygen and supports more wildlife, so shade is important. Fallen branches and leaves provide food for the insects that ultimately feed fish, frogs, and other creatures. Zach Blodgett, operations manager/engineer with the Department of Public Works, said erosion control is one of many ways the city is addressing stormwater. The city is working with both the Stormwater Master Plan from 2016 and the Municipal Roads General Permit, a continuous inventory and improvement process that is required by the state and focuses on roads, with gravel roads being the largest concern.  Blodgett said the current project in the park is funded through a $49,000 State of Vermont Clean Water Grant, for which Friends of the Winooski River wrote the application. He said this project addresses the last of the most urgent areas identified by the 2017 inventory. Friends of the Winooski, along with UVM Extension and six other groups, created the Green Stormwater Infrastructure Walking Tour, a folded, pocket-sized map that takes walkers on a flat, 3.1-mile walk through town, highlighting and explaining effective stormwater practices, including rain gardens. Copies of the free map are available at dozens of places around town, including city hall, the VSECU, and Hunger Mountain Co-op. The Vermont Department of Environmental Conservation has an excellent 52-page booklet on its website: “Vermont Guide to Stormwater Management for Homeowners and Small Businesses.” What about the frog pond? Ellsworth said it will be dredged next year. After that, White will need hip waders if she wants to stay dry when she walks off the shore.
Stories about Hubbard Park
UNDERWRITING SUPPORT PROVIDED BY