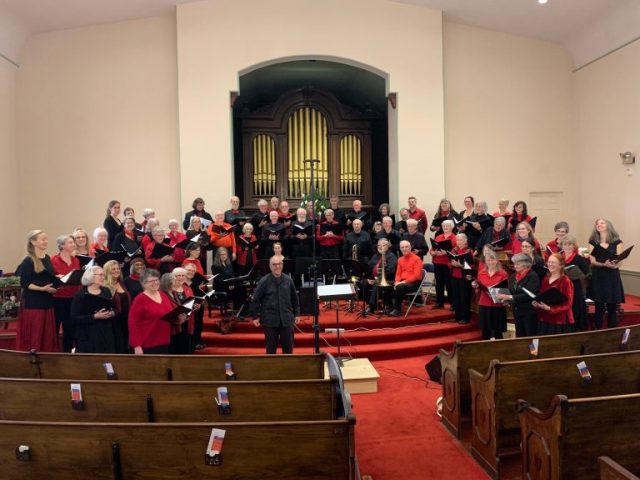 The Onion River Chorus is dedicating this year’s Christmas Concert to the memory of Chorus co-founder and conductor, Larry Gordon, who died recently in a bicycle accident. The Chorus will present two concerts, led by Richard Riley, on Saturday Dec. 18 at 7:30 p.m. and Sunday Dec. 19 at 4 p.m. at Bethany Church, 115 Main St. in Montpelier. According to the Chorus press release, the program attempts to channel the spirit of Larry Gordon by presenting the contemporary Estonian composer Urmas Sisask’s “Magnificat,” which Gordon rehearsed with the chorus for seven weeks before his fatal accident earlier this month. It also includes four pieces from the shape-note tradition — including one of Gordon’s own — that he championed with the “Word of Mouth” chorus, which predated the Onion River Chorus.  Steven Light, who sang with Gordon in “Word of Mouth,” selected several pieces for the Dec. 18 concert, including “Wondrous Love,” “Northfield,” “Captain Kidd,” and “Do Not Go Gentle,” to round out the amended program. Gordon’s longtime friend and colleague Lynnette Combs will perform in two movements from Sisask’s major work for organ, “Geminorum Kastor.” The “Magnificat” is for four-part a cappella voices, in twelve movements, setting each verse of the traditional Latin text. Each of the first ten movements is based on a different five-note pentatonic scale and uses only those five notes in all the vocal parts, giving the harmonies and melodies a modal feeling. Onion River Chorus requires audience members to be masked and fully vaccinated for COVID-19. Admission is $15, and tickets will be available at the door.
UNDERWRITING SUPPORT PROVIDED BY