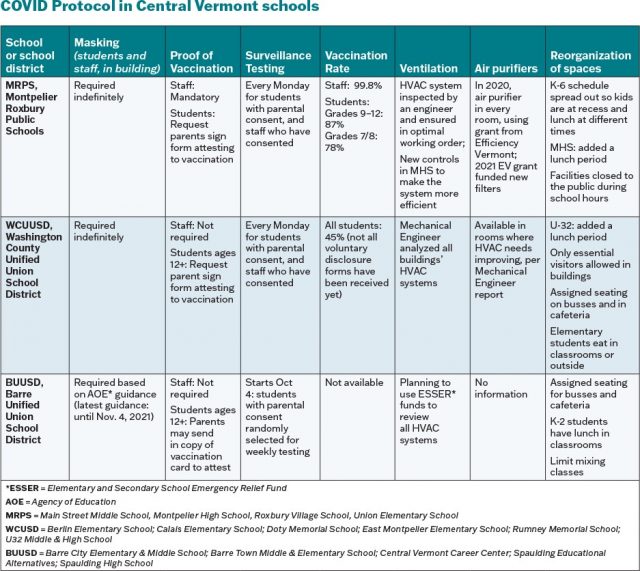 Well into the second year of a pandemic, educators not only are teaching, but also doing their utmost to keep everyone safe. Safety measures vary from masking to classroom management and tight scheduling. Most recently, schools throughout Vermont have begun surveillance testing. That is why last Monday, you might have seen Montpelier Roxbury Public Schools Superintendent Libby Bonesteel at Main Street Middle School swabbing noses. The Montpelier district has already hired one nurse substitute, but they are short-staffed, in need of food service workers, instructional assistants, and custodians. Thus, you’ll find the superintendent testing students. “It’s not sustainable to have the superintendent doing it,” Bonesteel said.  Surveillance testing joins a list of school COVID-19 mitigation strategies, driven by ever-evolving guidance from the Vermont Agency of Education, the Centers for Disease Control, the Vermont Health Department, and the American Academy of Pediatrics. Add to that schools can no longer count remote instruction toward learning hours; sprinkle in the labor shortage, and you’ve got a recipe for stress. “It is a highly nerve-wracking, anxiety-provoking situation,” said Chris Hennessey, superintendent at the Barre Unified Union School District. “…folks are understandably exhausted by this … [and] we’re all over the map in terms of what we think should be done. It’s a real challenge to meet everyone’s needs.”

While many safety measures, such as masking, are now familiar, weekly testing has been in place for only a few weeks.  “It’s another mitigation strategy. We get the results quickly and it’s peace of mind for the parents,” Bonesteel said.  In the Montpelier Roxbury K–8 population, 75 percent of students are participating, Bonesteel said.  “We haven’t had any positive cases yet.” In the Washington Central Unified Union School District, three weeks of surveillance testing has revealed two positive cases. Every positive case requires the staff to follow up with contact tracing, communicating with the school community, and a quarantine procedure. Because there’s no remote school, quarantined kids lose classroom time. Minimizing the number of contacts each student has (and therefore minimizing the number of students missing school while quarantining) is exactly why measures such as assigned seating in buses and cafeterias are in place. “We are organizing physical layout and schedules in a way to reduce contact,” said Jennifer Miller-Arsenault, Washington Central superintendent.  “Primarily what we’ve done is examine our lunch practices,” she said. “Kids can’t eat lunch with masks on, so that’s probably one of the riskiest times of day. What lunch looks like varies by building, based on a lot of factors including staffing and coverage. To the extent possible [kids are] eating outside and in classrooms.” Miller-Arsenault added “We don’t have a single school that is fully staffed. We need to fill teaching positions, drivers ed, and two schools need a music teacher. We need a literacy interventionist, paraeducators, behavior interventionists, food service, and custodial.” Testing has been in place for several weeks at Montpelier Roxbury and Washington Central, but the Barre Unified Union School District is just getting started. The delay is because of reduced staffing and three weeks of “heavy positive cases” earlier this fall, Hennessey said. Contact tracing required the time of all staff members, he said, leaving no staff members to set up surveillance testing until early October. Measures such as adding a lunch period to reduce the number of students in the cafeteria require extra staff time as well, and “Barre is dealing with staffing shortages,” Hennessey said.

Adrienne Gil, parent of two middle schoolers in Montpelier, has a master’s degree in public health. She enthusiastically supports weekly testing in schools. “The youths are the ones who are … asymptomatic and can be carriers,” Gil said. “Testing is one tool in our COVID toolbox.”  In fact, Gil was testing herself and her family weekly before the schools started doing it. “It is so critical for us to have that data,” she said. One of her children, she added, is 11 and not vaccinated. “She could have [COVID] without symptoms and bring it home. I have severe asthma.” Kim Smith, parent of a Montpelier High School student, has a different take.  “If it was just me, I would sign up in a heartbeat. I’m not anti-testing, I just have concerns about burdening the kids and the teachers,” Smith said. “I think it’s a great option to offer kids who are concerned for themselves and for community spread and truly want to be a part of that effort. I hope that kids who are feeling overtaxed don’t feel pressured to participate when dealing with so much already,” she said. Bonesteel noted that test administrators are encouraging students to do the swab themselves.  “Research and data show that when a child does it themselves, we get a more accurate result. We’re encouraging the kids to do it themselves. It gives them control and ownership of it,” Bonesteel said. Cassandra Hemenway recently joined The Bridge staff as its new managing editor. Hemenway got her start in community journalism at the Hardwick Gazette in 1994 after earning a master’s degree in journalism from the Boston University College of Communication. Her writing credits include the Times Argus, Seven Days, Writers Magazine, Kids VT, Green Living Journal, Green Energy Times, and many others.
UNDERWRITING SUPPORT PROVIDED BY