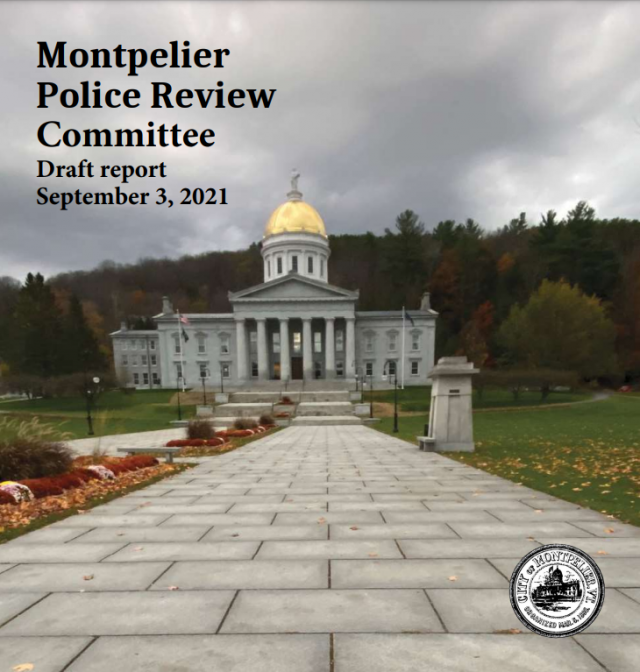 While it has become a national issue, policing is ultimately local and vital to a community. The City of Montpelier has been conducting an almost year-long review of the Montpelier Police Department that has encouraged input from a broad spectrum of residents and community groups. The recently completed Montpelier Policing Report will be formally reviewed by the city council at the next regular meeting at 6:30 p.m. Wednesday, Oct. 13, at city hall.  Alyssa Schuren, who served as chair of the Policing Review Committee during the project said she will be stepping back from her involvement with the next phase of the process. “It’s been about 20 hours a week in a volunteer role for nearly a year,” she explained. She will be focusing on her work as a consultant for “reform-oriented prosecutors and public defenders’ offices to ensure that criminal justice is improving over time,” she said. The city council appointed members to the Policing Review Committee on Oct. 28, 2020. Overall, Schuren sees the key recommendations from the study “to implement a directional shift away from police and toward service providers in appropriate circumstances.” For instance, the current statutes concerning public drinking and sex workers criminalize behavior that can be more fairly and effectively handled by trained, on-the-street social workers and organizations such as Good Samaritan Haven. The draft report was available for public review and comment Sept. 3–18. Schuren said that the committee received 15 responses to the draft report from community members. “Most were positive, some were critical,” she said. Montpelier Police Chief Brian Peete is among those appreciative of the report. “We have a lot of agreement with the report and an appreciation for the effort that has gone into it and the participation of so many community members,” Peete said. He emphasized that he and the officers in the department are open at any time to conversation with members of the community.  “For any folks in the community — I will do my best, along with any of the officers in the department, to be available to sit down, answer questions, and explain what we do. I love feedback. It helps me get better,” said Peete. The police department has submitted a formal response to the Policing Report, which will be available to the public at the Oct. 13 city council meeting, Peete added.

The Issues Being Addressed

The recommendations by the committee address: The 78-page Policing Report was developed with input from more than 80 residents, who were included in eight focus group meetings with participation of key affinity groups, including LGBTQ, BIPOC, city staff, the unhoused, and emergency services staff. The outreach included a public survey, the Equity Assessment of Montpelier conducted last spring. Schuren noted that each of the recommendations in the report includes budget estimates for the cost of pursuing each recommendation, should they be adopted by the city council. The estimates were developed in consultation with city staff.  Creative Discourse, a Burlington-based consultancy, designed the survey and facilitated the focus group discussions under a $10,000 contract through Montpelier’s Social and Economic Justice Committee, of which the Policing Review group is a sub-committee. In addition to Schuren, members of the Policing Review Committee include Justin Drechsler, Jen Duggan, Daniel Towle, Abbey Jermyn, Michael Sherman, and city councilors Lauren Hierl and Jack McCullough. The draft report can be requested in hard copy at city hall, or viewed on the city website: montpelier-vt.org/DocumentCenter/View/7713/Police-Review-Committee-Draft-Report-for-Public-Review-9-3-21
UNDERWRITING SUPPORT PROVIDED BY