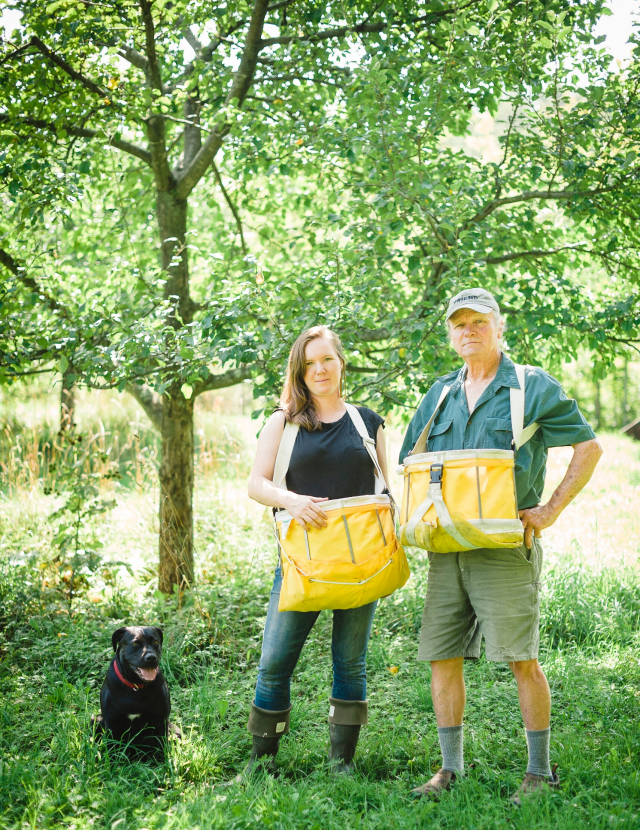 West Glover is not everyone’s cup of tea. Not a Walmart to be found within 50 miles. An upper elevation near the Canadian border means winters that make Montpelier seem warm. And, the commingled wild country and working dairy farms might bring to the mind of an old Vermonter a remembrance of a Vermont of 75 years ago.  A notable amenity is the world famous Parker Pie Company near Lake Parker, in busy downtown West Glover (right next to a very busy dairy farm). There you might dine on some delicious chicken from Pearce’s Pastured Poultry of Hillside Farm. Hannah and Bill Pearce, the father/daughter team who co-own farm, say Parker Pie is their best customer. The Pearce’s raise 5,000 meat birds a year. 300 turkeys, and some ducks. One summer day, I bought a ready-for-the-oven duck from Hannah, who encouraged this daring act (I’ve never cooked a duck before, and … well … she assured me I could do it). It did indeed make a tasty meal.  Hannah Pearce represents the farm at the Capital City Farmers Market in Montpelier, also selling cider and other farm products, but principally poultry and pork products.  Despite the distance from Montpelier, many savvy cooks visit the farm each summer to fill their freezer with the birds raised by the Pearces. The back roads between Routes 14 and 16 are a lovely autumn meander, although I must admit, I got lost on my first try. Not to worry, most folks know Bill Pearce’s whereabouts. No one seems troubled that the same road has a couple different names, in this case both Barton Road and East Albany Road.  Chickens raised for meat are quite different from traditional breeds. They are rapid growers but poor foragers and must be encouraged to adopt a healthy diet by moving them to new pasture every day. Otherwise, Bill assures me, they’d just sit around a feeder and eat nothing but grain. The cages, designed by Bill, are large and moved by tractor. Raised only in spring and summer when there is lots of fresh grass, the flavor of these birds in contrast to the industry standard of ‘confined animal farming operations’ (CAFOs) is easily detected by the palate.  They raise their 300 turkeys in a similar manner, moving the turkeys about in an electric fence enclosure, although the electric fence has proven to be less than 100 percent protection against ‘coy dogs,’ which once killed dozens of birds. A Maremma ‘turkey dog’ sits with his charges guarding against intruders.  Bill also designed and built the processing facility at Hillside Farm. The many ingenious devices to speed up work as well as the immaculate buildings are immediately apparent. With on-premise coolers and freezers, the farm sells almost year round.  Bill has done a lot of different things in his life. One of his most famous were his “Dilly Beans,” sold back in the 20th century when the farmers market was at the County Courthouse. With the finance skills of Wes Hamilton and the promotional expertise of Ed Dufresne, the Chilly Ranch concerts happened on a stage Bill built.  Hannah serves on the board of directors of the nonprofit corporation, Albany Community Trust, that revived the East Albany General store. Hannah Pearce is an example of hard working young folks who are reconfiguring Vermont agriculture. She is knowledgeable and always willing to give tips on cooking Hillside Farm products.  Find Pearce Farm poultry at the Capital City Farmers Market on Saturdays.
UNDERWRITING SUPPORT PROVIDED BY