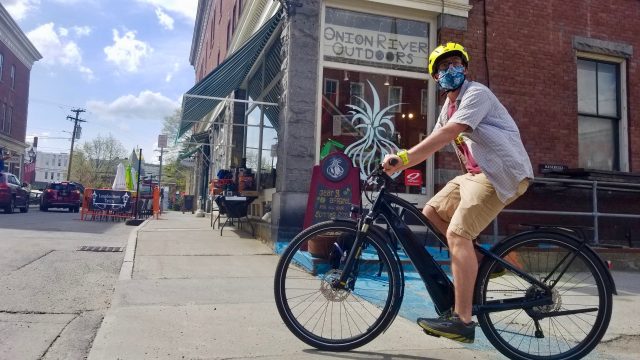 The seeming disconnect of a speedy cyclist casually pedaling down State Street — or zipping up one of the many, rightly intimidating hills that surround downtown Montpelier — has become less puzzling in recent months. E-bikes, which incorporate a propulsion-enhancing motor, are increasingly common on the streets of the capital city. Bikes with ever-improving rechargeable batteries are seen as strategic in efforts to reduce carbon emissions and reliance on fossil fuels for transportation.  To encourage the use of e-bikes as a transportation alternative, Green Mountain Power offers a rebate at the time of purchase, said Lincoln Frasca at Onion River Outdoors. Also, because of the great variety of e-bike designs available, they have become viable transportation options for commuting, grocery shopping, picking up the kids from school, or hauling a considerable amount of gear.  They also have enabled older cyclists to stay with an activity they love. Longtime Montpelier teacher Roger Crowley, after retiring became an early-adopter of e-biking. “I love being outdoors and riding. In 2015 I had a total knee replacement and started looking at ways to get around the hills of East Montpelier when I ran into Larry Gilbert in Middlesex at his Zoom Bike store and we talked about e-bikes. He’s the guru of e-bikes in Vermont as far as I’m concerned,” he explained in an e-mail message to The Bridge. Considering that getting home from downtown Montpelier through the hills of East Montpelier involved a 1,700-foot climb in elevation, the boost from a pedal-assisted electric motor provided timely assistance. “I bought my first Class 2 RadRover in 2016. Class 2 e-bikes are pedal assist with a throttle and have max of 20 mph, which is the speed limit on most public trails. Of course the Spandex crowd flies by me on unassisted regular bikes at 35–40 mph. Each state classifies e-bikes a little differently, but most follow the federal guidelines for Class 1, 2, and 3 e-bikes. I wanted a Class 2 e-bike because it would give me the most access to rail trails and other public bike paths,” Crowley added. Onion River Outdoors’ Frasca explained that e-bikes are federally classified, 1.0 through 5.0, based on the range of the battery in miles and the power of the electric motor. “We mostly carry Class 3.0 and 4.0 e-bikes,” he said. These typically are pedal-assisted and have a range of 40 to 60 miles. The range depends a lot on terrain, so in Vermont it’s often going to be closer to 40 miles before you need a recharge.”  The least expensive e-bikes are priced at around $2,000. The more expensive rigs for sport or mountain biking can run as much as $14,500, as indicated by pricing on the Onion River Outdoors website. Because of COVID-related supply chain problems, the availability of new conventional bicycles has been limited. “It may be another two years before manufacture and supply are fully recovered,” Frasca said. In the meantime, Onion River has focused on keeping customers’ existing wheels safely on the road. The availability of e-bikes has been better consistently. Onion River Outdoors currently has two cargo bikes and 28 more conventionally set up e-bikes for sale at the shop on Langdon Street. Although “direct to consumer” deals can be found, Frasca encourages those considering an e-bike to remember the advantages of purchasing through a local dealer. “While we can and will work on other brands, as a Specialized dealer we have the specific training and reliable parts supply to maintain a bike efficiently,” Frasca said.
UNDERWRITING SUPPORT PROVIDED BY