What do you like to do in summer? Sure, there are the usual activities — swimming, boating and camping — but there are other activities also reserved for summer. Sometimes this season is the only time for people to catch up on their reading because they are too busy to read during the school year. In this issue, we have book reviews by youths on their favorite reads. Additionally, swapping spooky stories around a bonfire is another summer activity, and we have a nice, juicy haunted house story by Linda Radtke. And, of course, farmers markets and farm stands are best in summer months.

Montpelier has a robust, lively farmers market each Saturday. But there are more things to get from it than peas and kale. I went for the first time in a long time on June 19, and lots of joyous stimuli tickled my senses. Bustling crowds at vendors animatedly chatting away warmed my heart; fruits, vegetables, crafts and glowing maple syrup feasted my eyes; the smell of fresh baked bread and pizza satisfied my olfactory sense, and the laid-back sound of music soothed my ears.

I ran into about a half dozen people I knew and began talking to them for the first time since the pandemic shut down. WITHOUT a mask. I probably said all the wrong things and spoke too much or too loud.

Then I met Bette Lambert of Silloway Maple. She was a student of The Bridge’s former editor and publisher, Nat Frothingham. She’s also an author, having published “Reflections of a Farm Wife” a few years back. Her book is for sale along with her maple treats at the farmers market. But back at her shop in Randolph, she serves delicious creemees. That’s the thing about the market. It is a point of confluence for people from many miles away. The Red Hen, for example, is a little (albeit popular) bakery/sandwich outpost in Middlesex. And Pete’s Greens is from up Craftsbury way. They, along with people like Bette Lambert of Randolph, all set up under representative tents for those city people who may not otherwise venture to the boonies to see the talent around us. 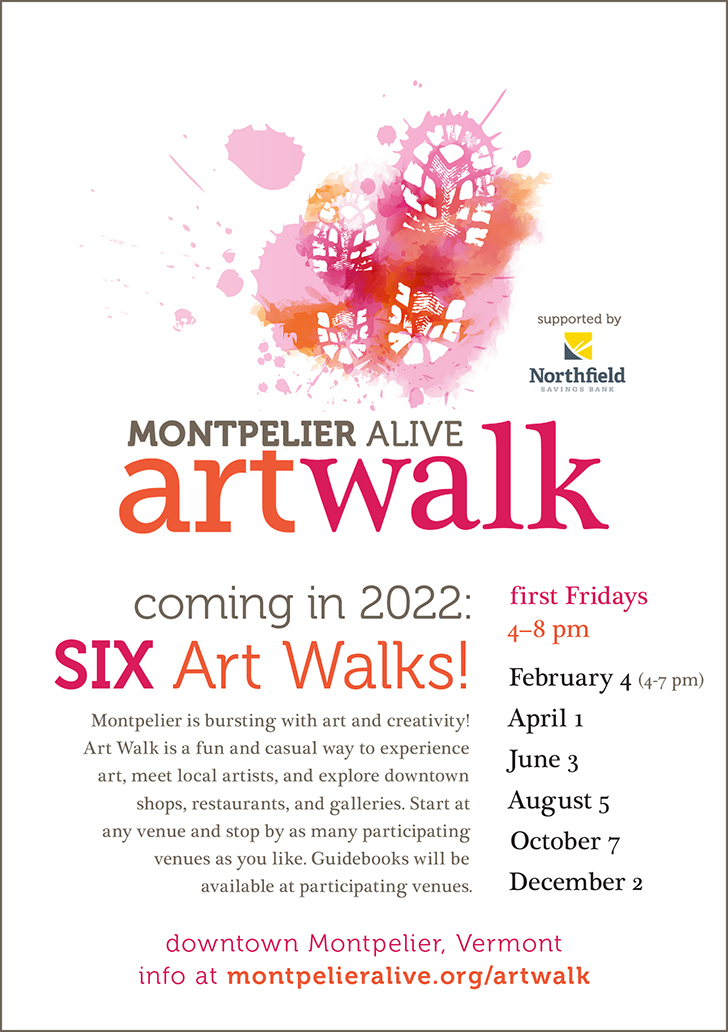 I also noticed that, this year, there were more people traveling to the market on bicycles than in previous years. Or, at least, the bicycle accommodations appeared to be larger and filled with more bikes. That in itself is fun in summer.

I’ve never gone to a commercial farm to go berry picking. Usually I would go out to the edge of the fields at my grandmother’s house in Mt. Holly, or at my house now in East Montpelier, where raspberries and blackberries are plentiful in July. But this year, for the purposes of reporting out the experience to our dear readers, I stopped by Dog River Farm — the only “pick your own” strawberry place nearby that didn’t require a reservation.

Owner George Gross led me down the road to the picking spot on an ATV with me following behind in my 2010 Subaru Impreza. “Are you allergic to bees?” he asked before bringing me down a two track lane through a field to a spot out behind a gigantic bee-keeping operation. He gestured for me to park out behind the beehives, which I did, then I stepped out into the sweltering sun. I had been sweating and hot before I got up that morning as a heat dome covered New England. The air conditioning in my car died sometime during the summer of 2019.

George told me I would be picking Rutgers Scarlet strawberries. He said they did not grow well this year, and that he was planting a different, more hearty crop for next year. But his retail sales have been very good, “through the roof,” he said. “I’m psyched. People are buying local. If you want good fruit and vegetables, buy local.” He pointed out how his fruits are grown in soil and compost, while California varieties are grown in chemicals and plastic, which, in his opinion, makes them tasteless.

The strawberries looked beautiful to me. Perfect. Ripe. Red. Sweet. I spent about a half hour picking a little over a pound (didn’t want to pick more than I would eat), and trudged back out to drive up to the farm stand to have them weighed. There was a line of people waiting to buy strawberries and to get creemees. After I paid $6.00 for the berries, I stopped at Shaw’s for some whipped cream and lady fingers. That was a fine summer supper.

Summer fun for me has always included ghost stories. I remember going on sleepovers as a camper attending Lotus Lake Camp. Before we went to sleep under the shelters we built from tree branches, we sat around a big bonfire. The camp counselor told stories about teenagers whose car runs out of gas in the middle of nowhere in the middle of the night and.… Or the one about the covered bridge in Stowe where a young woman named Emily went to meet her lover in the middle of the night dressed in her wedding gown. And waited. And waited. She was found dead in a shallow pool in the brook after her betrothed failed to show up, and her wails and ghostly image have lingered there ever since. Visiting Emily’s Bridge was always a summer escapade, followed by doing some brook walking in the icy waters.

Montpelier has Anna’s ghost, as researched and written about by Michelle Singer. You can read the whole story online here. It starts like this: “It was dawn. A light rain fell. A lone woman in a black dress and Mackintosh walked up College Street toward Main Street. As neighbors stirred in their homes, the morning air suddenly echoed with the sound of gunshots.”

Yes, long, dark summer nights are the perfect time to contemplate ghost stories. And Linda Radtke has provided a story of the demolition of the so-called “haunted house” in Middlesex, which looks like it could be the setting for such a story.

One of my favorite things to do in recent years is to study history — especially by visiting actual historic places and relics. There is the Vermont Historical Society at 60 Washington Street in Barre with exhibits dating back to the early settlers and before. There is also the Vermont History Museum right in downtown Montpelier at 109 State Street. The list goes on to include the Vermont Granite Museum in Barre. But apart from museums and exhibits, it is fun to ponder historic sites right out in public. The Vermont State House has a wealth of exhibits, from the cannon on the lawn to the intriguing chandelier in the House Chamber. It has historic paintings throughout, and ancient fossils in the black marble on the floor of the main entrance. This is one of my favorite places. There is also the tower in Hubbard Park. Recently I visited the Roxbury Historical Society to see the small exhibit of clockworks, a cannonball, an old wooden barrel, cloth woven during the Revolution, and exhibits created by the Historical Society director, Sue Nevins, but that is not open on a regular basis. Many smaller historical societies are by appointment only.

Summer fun looks different to each person. I, for one, would not find it fun to ride a bicycle up Gould Hill Road. But I see many people doing it every day. I love brook walking, gardening, eating strawberries, and even mowing the lawn. And, yes, writing for The Bridge.