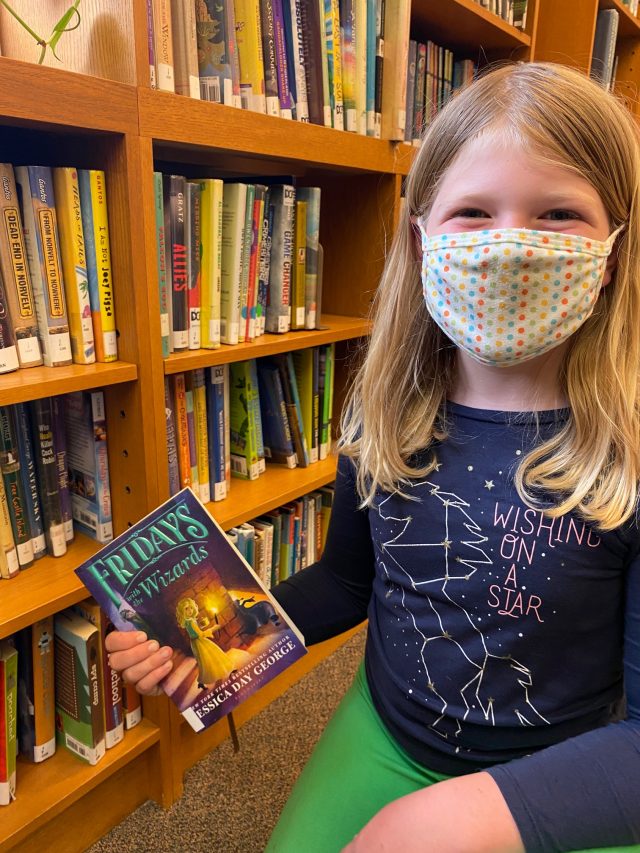 The strangest of all school years is finally over. Kids can go outdoors to walk, run, bike, hike, or just lie in the grass and watch the clouds move above them. But your children have worked hard this year and you don’t want their reading skills to slide. Reluctant readers will need the books that kids hate to put down. Avid readers may not need the prompting, but they do want to find the coolest, most exciting books. Kids know best what other kids will like. The following book reviews have been written by younger readers to help your child find the best summer reading.

I  read “The Boxcar Children Series” by Gertrude Chandler Warner. The characters are Henry, Jessie, Violet, and Benny. I like the book series because every book is a mystery! I think that the books are good.

“The Castle Mystery” is set in a castle that has a secret tunnel. “The Lighthouse Mystery” is set in a lighthouse, and there is a house next to it that the townspeople do not know about. In “The Blue Bay Mystery,” the Boxcar Children arrive on an island where there is a shipwreck. There they meet a kid who was left alone when the doctor went to get help.

I think that you should read the series! Get the books at your local bookstore!

I read “The Ranger’s Apprentice” series by John Flanagan. “The Ranger’s Apprentice” series is based in a medieval world where there are kings, knights, and an elite ranger corps. The ranger corps is believed to be a group of magicians because of their ability to come out of nowhere. They are highly skilled at unseen movement, archery, and knife throwing. The main characters are Will, Princess Cassandra, Horace, Alyss, and Halt. The stories take place in Araluen (which borders Picta and Celtica), a very forested kingdom. In the next paragraph I will write about the first book of the series, “The Ruins of Gorlan.”

In the “Ruins of Gorlan,” Will is anxious for Choosing Day. Choosing Day is when the baron chooses a career for you that you study and train to do for the rest of your life. Will has always wanted to be a knight and to protect Araluen. When Choosing Day arrives, Will is devastated when he gets picked to be a ranger by the kingdom’s head ranger, Master Halt. Halt believes that because of Will’s skill at unseen movement and his small size, Will could become one of the kingdom’s best rangers. After a few weeks of training with Halt, Will quickly realizes the importance of rangers for the safety of the kingdom. Even though Will was disappointed that he was not training to be a knight, he realized that being a ranger was just as exciting.

Like the first book, “The Ranger’s Apprentice” series is action-packed and exciting. “The Ranger’s Apprentice” series has 12 books, and I would recommend it for readers aged 10 and up who like action and adventure. The series emerged from 20 short stories John Flanagan (the author) originally wrote for his son, Michael, which later became the Ranger’s Apprentice’s first book, “The Ruins of Gorlan.” He published his last book of the series “The Lost Stories” in 2011, and has also written a prequel series and sequel series, as well as a companion series “Brotherband Chronicles.” You can borrow all 12 books of the series as well as his other series from the Kellogg-Hubbard Library.

“Fridays with the Wizards”

“Fridays with the Wizards” is the fourth book in the “Castle Glower” series written by Jessica Day George. The main character, Princess Celie, finds out that an evil wizard was lurking in the walls of the magical castle. The castle is magical because it has a gem — the eye of the castle — that controls it. The evil wizard broke the gem in half, causing half of the castle to travel to Sline and the other half to remain in the Glorious Arkower. The castle has the power to make its rooms change. The castle has a special connection with the King, Celie’s father.

My favorite character was Rufus, Princess Celie’s griffin. Griffins are lions mixed with large eagles, so they can fly. Overall, I thought that the book and the “Castle Glower” series was good. The books are exciting and unpredictable. Whenever you think that something will happen, the thing that you least expected happens. I highly recommend checking out this series at Kellogg-Hubbard Library or your local library.

How do a group of thieves not set off any burglar alarms and manage to smuggle goods out of the United States? Leave it to the Hardy Boys to solve this mystery in “The Twisted Claw.” The Hardy Boys find a book with a twisted claw symbol connected to a pirate organization. This mystery leads the Hardy Boys to a Caribbean island where they get captured by modern day pirates.

The funniest part of the book was when the pirates captured the Hardy Boys in their hideout and held them prisoner. The Hardy Boys had an EPIC escape that I won’t spoil. While in captivity, they run into a fellow prisoner who’s been there for over a year!

An exciting part is when Joe and Frank Hardy become trapped by pirates in the hold of a ship during a storm and they are almost crushed by the cargo.

There isn’t that much to change but I wish the Hardy Boys’ dad was there when they were captured by the pirates. It’s always more exciting when he is around.

I rate this book 4.5 stars because, in my opinion, it’s the best Hardy Boys’ book in the series. I like the mixture of international adventure and humor!

review by Will Duggan, age 9

Are you a kid looking for a good read? I might know just that book. I would like to tell you about one of my favorite books. “The Unwanteds.” “The Unwanteds” is about two worlds that have very different ideas of life and eventually collide.

Before I begin, here is some basic information to know. The author is Lisa McMann. If you like this series, there is another series like it,  “Unwanted Quests.” There are five books in that series.

My favorite characters are Marcus Today and Alex Stowe. I would describe Marcus Today as the main character because he’s nice, fun loving, and inspires imagination and creativity. Alex Stowe is another main character. I think he is a great artist and spell caster. I do not like Quill, but I will explain what the land of Quill is. Quill is a desert with a roof that discourages creativity and imagination. And the people of Quill try to kill people who are creative.

And now I will tell you about some parts I do not really like so much. One is the title: “The Unwanteds.” It is not something you want to read about without some background information. The other thing that I don’t like is the beginning in Quill. It feels discouraging of creativity. Creativity, at least in my opinion, is a good thing, not a bad thing.

I recommend that readers in third grade and up read this book because there is some violence and death. So readers aged seven minus should not read this book because they may get scared. All in all, this should be a great read for readers in third grade and up because it has tension, happiness (most of the time), sometimes sorrow, and encourages creativity. So if you are eight or older, I encourage you to read this series.

This book is about Nate’s life, much like some of the other books in the “Big Nate” series. There are more than 20 books in this series, and I think I have read most of them. I personally like the books in this series where there are just different comic strips on each page and they are not all connected, they are just different parts of his life. My favorite book in the series is “Big Nate Payback Time.” It is the  funniest. But “Big Nate Blasts Off” is one the best choices in the “Big Nate” series. I give it 4 out of 5 stars because it’s a funny and entertaining graphic novel, but it is still a quick and fun read.

And that is my book review for “Big Nate Blasts Off” by Lincoln Pierce.

“The Phantom Tollbooth” by Norton Juster is a book about a kid named Milo. He is not interested in much and is always very bored. One day he finds a mysterious box in his house, with his name on it. Inside the box there are directions for how to assemble a tollbooth. (A tollbooth is a booth where drivers pay to go on a road.) Also in the box, Milo finds a map. He chooses a random location on the map, gets in a toy car, and goes through the tollbooth. His adventure starts! Along the way he meets magical creatures, silly people, and finds himself in dangerous situations.

One of my favorite characters in the book is a dog named Tock…who ticks! Tock is a watchdog — a literal watchdog with a clock on his side! Milo meets Tock, and Tock decides to go with him on the journey. I like Tock because he is a dog, and is wise, super interesting, and very helpful.

In the book, Milo and Tock go to a land called Dictionopolis where they meet King Azaz, who sends them on a quest. I don’t want to give too much away here, but King Azaz is one of many unique characters who appear throughout the book. Some act good, some act bad, and almost all are mischievous. Milo has to navigate his way through this fantasy land if he wants to get back home.

I like the book because it has action, adventure, and mystery. Plus, there are a lot of funny things that happen combined with clever word play and creativity with numbers.

I also like how it includes different perspectives and shows you a different way to look at the world. I started reading this book because my teacher assigned it to me at the end of the school year. At first, I was annoyed to be assigned a book to read because I love to read and really like to choose my own books. But as soon as I started reading “The Phantom Tollbooth,” I loved it!  Like Milo does in the book, I learned you can like something that you might not initially think you will like. It also shows how there is enough to do right where you are. You can find your own fun with your imagination.

This book is for people of all ages, and it is one of my mom’s favorite books, as she read it when she was my age. I think you will really enjoy this book, and I hope you try it!