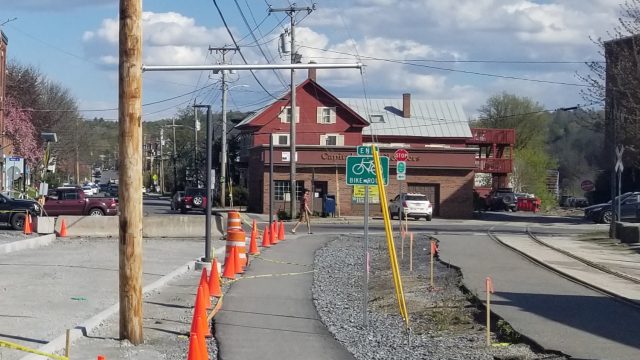 by J. Gregory Gerdel With RR signals in place on Barre Street and a temporary tie-in installed across Route 2, granite-laden trains will again be rumbling through Montpelier, multiple days a week, according to Vermont Rail Systems Vice President Seldon Houghton. Last summer tracks were installed on a long abandoned railbed that runs parallel to Barre Street. Completion of the project was delayed, at least in part, by a shortage of rail ties. Vermont Rail Systems, which owns and operates the line, upgraded the old route to by-pass two bridges that otherwise would require far more expensive repairs to remain in service. “We expect to start running trains by late May or early June,” Houghton said in a phone interview. Asked about the somewhat unusual geometry of the track as it approaches the Route 2 crossing near Agway, Houghton said that it is a “temporary tie-in.” “The State has a roadwork project scheduled there next year, so the track alignment will be corrected at that time,” Houghton said. Downtown, the city has a contractor completing roadway and bike path upgrades in the empty lot where the tracks cross Main Street, near the Barre Street intersection.
UNDERWRITING SUPPORT PROVIDED BY