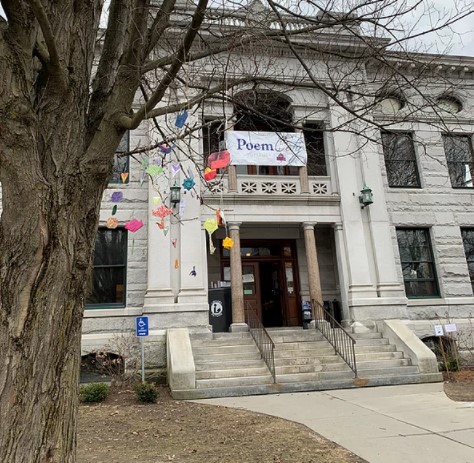 In the competition for Vermont’s Cruelest Month, March and April go head-to-head. April has an ace in the hole in Montpelier, however, and it’s PoemCity.

PoemCity is the Kellogg-Hubbard Library’s celebration of National Poetry Month. Hundreds of poems by Vermonters are featured in storefront windows downtown and the month’s programming is all dedicated to readings, workshops, and exhibits. Poems are paired with artwork, folded into origami, made into pocket sizes, and painted on sidewalks. As one community member said, “PoemCity is a feast!”

As the adult programs and volunteer coordinator for the Kellogg-Hubbard Library, it’s my job to coordinate PoemCity, but it’s really my privilege. I get to read all the poems and host all the programs, giving me a super dose of inspiration and awe.

This year, I was especially struck by poets who expressed in beautiful clarity why poetry matters, why poetry is sometimes the only way to say what wants to be said. Maybe I shouldn’t have been surprised, but these moments knocked my socks off all the way back to Toledo (as Geof Hewitt would say at one of his poetry slams).

After reading from his collection, “Poems from the Wilderness,” Jack Mayer answered a question about how he got started in poetry. Mayer’s professional life has been spent as a pediatrician, including as a country doctor making house calls in Enosburg Falls. He describes how his work as a doctor was the door that opened to his calling as a poet.

“It was initially triggered by a baby that was born with a rare and lethal genetic defect. The baby lived for just about maybe a year and a half, eighteen months. I made house calls regularly, almost once a week to this family that was really struggling to be able to take care of this baby after it was released from the hospital. It was a highly technology-dependent baby, it had a respirator, it had a tracheostomy tube, it needed a lot of care, and these folks, this family, were not versed in understanding high-tech medicine and were a down-to-earth Vermont family. I started going on a regular basis to this household and witnessing the just astounding level of love and care and the integration of this dying baby into this large Vermont family.

“I have this very long, it’s almost an epic poem, about this child and the family. It was those repeated visits that led me to try and capture these feelings in poetry. I did not want to capture them in a straight linear narrative. It really needed something more dramatic and more ethereal than I could have in a straight narrative…what went on there was just magnificent and I could only capture it in poetry. And once I wrote that, I was off and running.”

In her First Wednesdays lecture “Poetry During COVID-19,” Adrie Kusserow, cultural anthropologist, professor of sociology and anthropology at St. Michael’s college, and ethnographic poet, described the essential intersections of anthropology and poetry.

“I was at graduate school at Harvard at a really tough department of social British anthropologists who would have died if they knew I was sneaking off and writing poetry…I felt like when I was writing my dissertation I’ve never been so miserable in my life and it was because I felt like I had to be sterile and completely leave the poetry out of all humans I was witnessing. I decided then and there, I can’t do that again.

“I’m a big proponent of teaching ideas about culture and experiences of people cross culturally through art, plays, paintings, photographs, and poetry. In part, it’s my intrinsic need to put the flesh on what sometimes feels like didactic writing that’s just passionless, in a sense, and that’s not how humans are. Not the humans I know.

“Who are we to say poetry cannot be an ethnographic tool that we use to understand cultures and other people? Because when I write these poems, it brings me into a kind of fierce meditative focus on the moment where I uncover so many observations, insights, in a way that I sometimes don’t get to in academic writing. Yes, I do ‘participant observation’ as an anthropologist, I travel, etc., but I really feel that poetry is also one of my tools that I use to probe some the most subtle, nuanced aspects of human relations.”

Finally, a group of poets participated in an ongoing workshop graciously facilitated by Laurie McMillan called “Poetic Journeys.” The group met every Saturday for five weeks before they shared their work at an online reading. Listening to the reading, I was struck by a poet, a man named Bruce, who described himself by saying, “I’m a man who looked at a green vegetable on his plate last week and could not recall it was broccoli. I’m in dotage and I’m a coach who used to tell my players ‘Don’t worry about the score, play as hard as you can.’ And that’s what I intend to do. I’m not gonna quit, I’m going to play ‘til the final buzzer.”

PoemCity programs were all offered on Zoom this year, which means that most of them were recorded and can be viewed on the library’s website. If you missed them, you can still enjoy them by going to kellogghubbard.org/poemcity.

Michelle Singer is the adult programs and volunteer coordinator for the Kellogg-Hubbard Library. She’s been a poet since she was in the fourth grade, when she wrote a limerick about the rubber bands stuck on the ceiling. 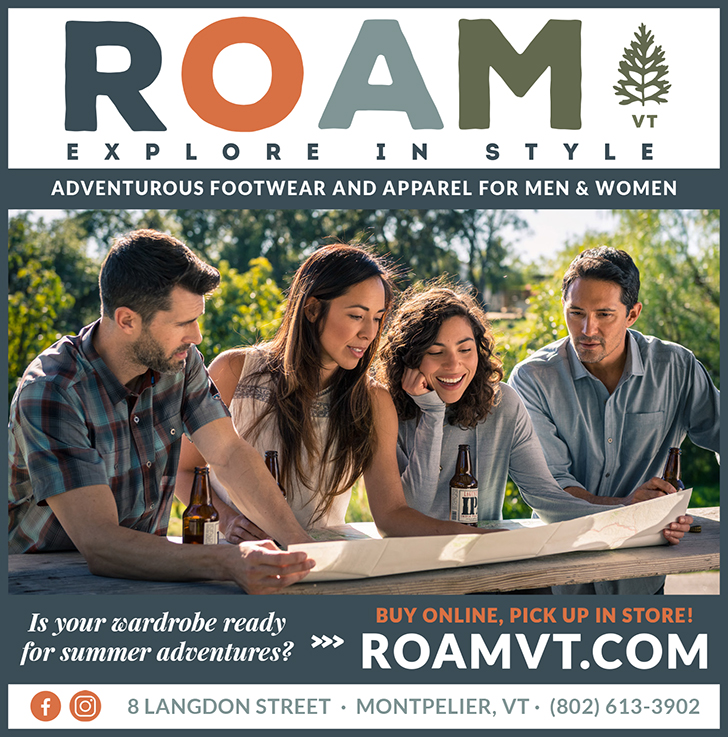