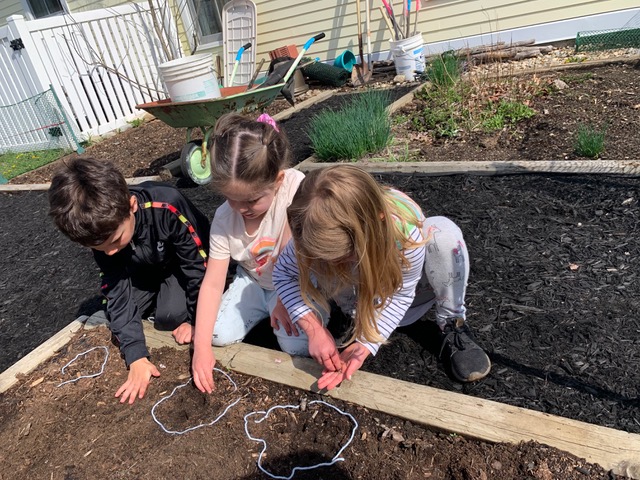 Maggie Rubick loves a garden. “It’s my happy place,” she says. Rubick grew up in Manchester, Vermont, where she now teaches at the Northshire Day School, but she really began to develop her connection with the natural world during her college years when she worked at the Brooklyn (N.Y.) Botanic Garden. During her time at the Botanic Garden, she was introduced to the Farm-to-School initiative.

She returned to Vermont 12 years ago and, in 2009, began teaching at Northshire, where she looked for ways to bring Farm to School into her classroom. Rubick wanted her young charges to become aware of good nutrition and to learn more about local sources of nutritious food. Farm-to-School teachers do just that, and in the process they also support Vermont agriculture.

Rubick started small. “I began by introducing my group to sweet potatoes from local growers through taste tests in the classroom. Then I added other kinds of produce.” At the time, meals were served family style at shared dining tables, and she intentionally paired picky eaters with more adventurous ones. If a child saw his or her buddy eating cauliflower with enthusiasm, maybe cauliflower wasn’t as strange as feared.

In addition, Rubick started a school garden, teaching her curious preschoolers how to become farmers. Four- and five-year-olds who have watched tiny seeds turn into pumpkins, carrots, and radishes are eager to get their hands into the dirt again when the next growing season comes around.

Field trips to local farms expanded the program, but Rubick was becoming overwhelmed. “Preschool teachers are with their students for almost every part of the day with only about an hour for planning. I was wondering if I could keep this going in addition to all our other activities,” she said.

However, things were beginning to change. The director of the school was intrigued with Farm to School and the food service director also wanted to become involved. Colleagues came on board, and soon a committee was formed that also included parents and, ultimately, health and nutrition workers. Nationally, there was a growing awareness that if we want to foster healthy eating habits and fight obesity, we don’t wait until children are 18 or even eight. We begin when their minds and tastes are still developing.

In 2020, Vermont was one of ten states and the District of Columbia to win a federal grant of $90,000. This was awarded jointly to the Vermont Agency of Agriculture and to Shelburne Farms. The focus will be on the building of a coalition of Farm-to-Early-Childhood teachers and proponents. In early 2020 Northshire Day School received a child nutrition grant of $15,000 from state-funded farm-to-school resources.

Gardens are only one aspect of Farm to School. Trevor Lowell, Vermont’s Farm-to-School organizer, stresses that this is a holistic approach to nutrition and the use of local agricultural products. Grant applicants must submit an action plan defining their goals and criteria for success. An applicant can include a garden in the plan, but this is not essential.

Upon being awarded a grant, applicants are assigned coaches, offered professional development and other educational resources, and encouraged to create a variety of learning experiences. Funds may also be used to strengthen community involvement with harvest dinners and field trips to local producers.

Gardens can enrich a Farm-to-School experience, but the Vermont public school calendar does not match well with the Vermont growing season. Seeds are put into the ground when the school year is winding up and the harvest is just about over when children return in the fall.

Preschools, which are apt to be open year-round, may find it easier to include gardens in their plan. Northshire’s Farm-to-Early-Childhood program was well enough established to weather the pandemic, although some things had to change. Classrooms could no longer take part in family-style meals and cooking utensils could not be shared. Elements of their action plan had to be rewritten, but the staff met the challenge and Rubick looks forward to restoring the full program.

For this teacher, the work of drawing a community together to support family nutrition and local farmers is deeply satisfying. It’s also a lot of work, but Rubick enjoys all of it, even coming in on weekends to care for the plants. “It’s just … restorative.”

Taste of Montpelier Packs the Streets