Jen Ellis, the Essex Junction teacher whose mittens turned into a sensation thanks to Vermont Sen. Bernie Sanders wearing a pair to the presidential inauguration last month, has put a different pair of her mittens up for a charity auction.

The eBay auction benefits Good Samaritan Haven, a shelter for people experiencing homelessness in Barre, and runs until Sunday, Feb. 14 at 10 p.m. “Jen’s generosity and the warmth and beauty of her mittens are a beautiful expression of Good Sam’s mission of helping others,” said Rick DeAngelis, Executive Director of Good Samaritan Haven. Donations to the shelter are also being encouraged for those who cannot afford to or do not wish to bid on the mittens.

“The popularity of these mittens has been a total surprise, but I’m so happy to be able to use it to support amazing organizations in Vermont like Good Samaritan Haven,” said Ellis, who makes the mittens from reclaimed wool sweaters with recycled fleece lining. Ellis is no stranger to Central Vermont — she started her grade school teaching career in 2006 at Union Elementary in Montpelier.

This is not the first time Ellis’ mittens have been connected to charitable fundraising. She partnered with Vermont Teddy Bear Co. to produce mittens, with some proceeds benefiting Make-A-Wish of Vermont, and with Darn Tough socks to make “Jenerosity Socks” based on the mittens with proceeds benefitting the Vermont Food Bank. She recently announced a partnership with artist Sam Georgieff of Poor Dog Farm to create images of woodland creatures wearing the “Bernie Mittens.”  Sen. Sanders has raised more than $1.8 million for Vermont charities by selling “Chairman Sanders” merchandise based on the Inauguration Day meme.

The popularity of “Bernie Mittens” might have reached new heights since the inauguration, but it was not a new phenomenon. After photos of Sen. Sanders wearing the mittens in New Hampshire and Pennsylvania went viral during the 2020 presidential campaign, a Twitter account called @BerniesMittens tracked the sightings. Ellis told Seven Days in January 2020 that she made mittens for all the teachers at her daughter’s day care in 2016, which included Sen. Sanders’ daughter-in-law, who ran the facility. Ellis made an extra pair for Sanders and included a note urging him to run again. 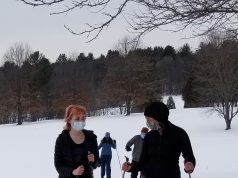 How to Get the Kids Skiing — Cross Country