Home Arts Another Musical Walk Down Memory Lane
Facebook
Twitter
Email
There is so much more to tell what music and life was like from the 1930s through 1940s before TV and all. I left out many French Canadian fiddlers — small town square dances, etc. As poor as everyone was during the Depression, we had one bright spot. That was radio. It seems every family had a radio. We didn’t have cars or phones, we had little food, but radio helped the country through the hardest times. There have been so many musicians in Vermont it’s hard to list them all. Old time fiddlers, retired farmers, country people of that radio generation now are gone. Thankfully young people are keeping traditional music from going extinct. I was born in 1935, the middle of the Depression. We stood in line for soup at the district school. People made their own music, which was needed more back then than today. I remember ads in magazines that read, “Amaze your friends and learn to play guitar.” People wanted live music for weddings, parties, picnics, and family reunions.  My dad played fiddle, my older brother, fiddle and guitar. We grew up listening to “The Grand Ole Opry” in Nashville, Roy Acuff, The Blue Sky Boys, Uncle Dave Macon, and, later, Hank Williams. This was in the 1940s. Farmers and country people would bring cowbells to ring along with the applause after every show. Every Saturday night we would listen.  I first started playing tenor banjo in 1949 — no one ever heard of a five string banjo up north. My brother and I were members of the Future Farmers of America outside of Westfield, Mass. I always wanted to farm in western Massachusetts, but land was too expensive there, so I came to Vermont in March, 1963. I bought my first cow and taught her how to come to the barn by playing the fiddle. That didn’t work in the winter, though, because frozen fingers wouldn’t work. In Vermont I joined up with dairy farmer and musician Bud Boydston, and Rick Norcross, a guitar player, and we played our first show on WCAX-TV in Burlington. Later, Andy Leader, a fiddle and banjo player, and I played at the Craftsbury fiddle contest. People stayed outside to hear us play after the show. Burt Porter, a ballad singer, and I did several shows at the Champlain Fair in Essex. In the early 1970s, I sang “The Mule Skinner Blues,” but Bill Monroe, who would follow my act, would say before he sang the same song, “This is how it’s done.” He didn’t like the way I sang it, but I liked the way I sang it. Besides, I could reach a high yodel note. “Mule Skinner Blues” is an old Black American folk “holler” song. But musicians mostly put their own style on songs. There ain’t nothing wrong about that! Bill Monroe and Earl Scruggs brought Bluegrass out of the Smoky Mountains to the broader public in America. Bill’s band began, I believe, in the 1920s.  Many people didn’t know that the biggest lovers of Bluegrass are horses. That’s because the native grass grown in Kentucky is the favorite of race horses, and that’s why Bill Monroe called his music “Bluegrass.” Bill Monroe was born in Kentucky. Anyways, the Vermont Council on the Arts hired Burt Porter and me to do shows for several years during the 1960s and 70s. Coco and the Lonesome Road Band played many years in Vermont, too. Mark Greenburg, of the Lonesome Road band, also organized folk concerts for many years. In addition, Woody Guthrie memorial shows were organized with vintage films. Mark had his own show on WNCS called “On and On” featuring bluegrass and folk and the annual concerts on the Vermont College green. Many musicians visited our farmhouse kitchen in the early 1960s. Among them were Doug Peck, a fine gospel singer, and Danny Coane. Danny Coane founded the band “Starlight Rhythm Boys,” which is still going strong. Folk music remains strong in Vermont with singers such as Coco and Patti Casey, who have great country voices, Banjo Dan and Willie Lindner of the Sky Blue Boys, Pete Sicely of Pete’s Posse, and Dick Sicely, of Cabot, and his band, who have been playing since day one.  Dick Sicely’s cousin ran “Country Cuzzin,” a bar that featured “Fiddling Slim”…he played square dances now and then. At one of the Craftsbury fiddle contests, Fiddling Slim shuffled onto the stage wearing a nightgown, his dog beside him. As he fiddled away, he put a cigar in one ear, high screechy notes made the dog howl, but when he started to take off his clothes, a state cop quickly pulled him off stage. In 1958 and 1959, Burt Porter had introduced me to the music scene at the University of Connecticut. The students there named me “Tom Banjo” — not because I was a great banjo player — but because they didn’t know my last name. All they knew was this vagabond guy with old clothes would show up, play on campus radio and at parties, and then vanish — only to appear weeks later.  I’ve never gone to college or high school — but in those days, college kids were becoming curious about folk music. Our family called it “old music.” I didn’t know until 1995 that the University of Connecticut students thought I was the Tom Banjo of the Grateful Dead song “Mountains of the Moon” written by Robert Hunter. Hunter was president of the University of Connecticut Folk Music Club, where Burt Porter, Ken Taplin, Warren Wellman, and I did concerts with Judy Collins before she got famous. I didn’t know Robert Hunter, and the Grateful Dead wouldn’t exist until years later. Anyways, this could or could not have been the connection of who Tom Banjo was, as people were asking on the internet.
UNDERWRITING SUPPORT PROVIDED BY 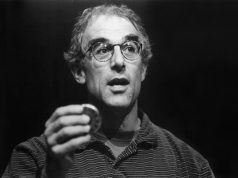