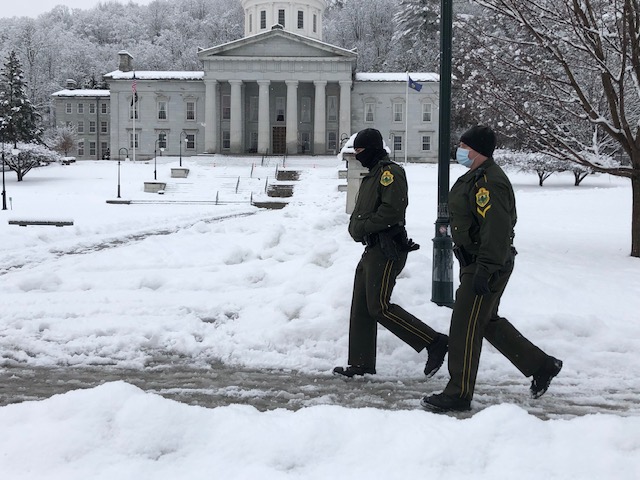 Vermont State Police officers patrol the grounds of the State House Sunday, Jan. 17. They were not confronted by either pro-Trump supporters or left-wing counter protesters. Photo by Carla Occaso.

Police — some in full tactical gear — appeared ready, but the pro-Trump riot stayed away through the early afternoon. Following a nationwide call for all state capitals to be on alert for armed supporters of President Donald Trump causing unrest, Montpelier got prepared. Mayor Anne Watson urged potential counter-protesters (and other citizens) to stay away from the State House to avoid confrontation and stay safe in a public address earlier in the week. State police, Capitol police, and the Montpelier Police Department beefed up their presence around town throughout the weekend.

On Sunday, a sizable group of police and members of the media showed up between 11:30 a.m. and 1 p.m., when The Bridge monitored the situation. Police from all over the state appeared to have joined local police in town. Cars from Shelburne and Burlington police were seen driving around the downtown area, including in the Meadow and on Elm Street. Quite a few dark green State Police cruisers were parked around the State House lawn. And some unmarked black vehicles were accompanied by law officers wearing what looked like riot helmets and body armor. Some pairs and groups of four law enforcement officers circled the grounds while others took stationary posts. In addition to guarding the State House, public safety officials also staked out the DMV building and the Vermont Supreme Court building.

The Bridge asked one of the troopers when “they” were expected, and he said they had no information on specifics. Adam Silverman, Vermont State Police Public Information Officer, sent out a joint statement from the Vermont State Police, the Montpelier Police Department, and the Capitol Police.

“Police agencies are continuing their enhanced presence at the Capitol Complex in Montpelier this afternoon. State Street in front of the Vermont State House remains open. No incidents have been reported,” Silverman wrote in the release. Around 11:20 a.m., Silverman notified the press that “multiple law-enforcement agencies have established an enhanced presence, as planned, on Sunday, Jan. 17, at the Vermont Capitol Complex in Montpelier.”

He elaborated that the agencies that were present showed up as a precautionary response to potential disruptions or violence following the Jan. 6 insurrection in Washington, D.C., “and calls for nationwide action including an ‘armed march’ in all state capitals.”

Vermont did not receive  any specific credible threats, but the Department of Public Safety wanted to be ready just in case anything happened requiring police.

“As noted previously, police are unable to provide details of any security measures, seen and unseen, that agencies are taking. Periodic updates will be issued throughout the day. If at any point a threat to public safety in Vermont becomes known, the authorities will update the community immediately,” the release states.

Police continue to ask the public to be vigilant and report to law enforcement any suspicious people, incidents, or possible threats. Tips also may be submitted anonymously online at www.vtips.us.

Meanwhile, a group claiming to align themselves with the anti-fascism group Antifa showed up at City Hall. The group of about 30 carrying mostly handmade signs mostly just stood quietly. The Bridge asked them about where they were from and if they were an organized group, and here is how one man responded:

“Antifa, despite everything you heard, is not really an organization, we’re actively anti-fascism,” said Traven Leyshon, of Calais. He said he is also president of the local labor council, and a member of the Vermont Chapter of the Democratic Socialists of America. Leyshon said those present were “from all over,” but he, personally, lives in Calais.