It seems quite a few Montpelier residents were startled to see a new entry sign on Memorial Drive at the Main Street Bridge. While its appearance and location are debatable, and may be debated further, the deeper concern is that so many were startled.

This entry sign is one of 48 new wayfinding signs in Montpelier’s downtown. They are the products of many years of discussion about how best to mark “gateways” into the city and newer discussions about how the city could brand itself. They also reflect well-founded concerns about visitors trying to find parking, specific shops, and attractions.

According to recent articles in The Bridge and Times Argus, the branding discussion began in 2014 and resulted in a Wayfinding Plan by 2018 with funding in 2019. A scan of city documents found online reveals multiple references to a plan, along with review by the City Council, but little to no graphic specifics. It seems there was never a public warning to notify citizens of documents on display either online or in the City Hall itself.

It is worth noting that any other sign in the downtown area must be warned publicly, then reviewed and approved by the Design Review Committee.

So while citizens were made aware of the planning process, it is understandable they were surprised to see signs erected, especially when zoning regulations subject all signs to public review.

Mike Miller, director of planning and community development for Montpelier, explained in an interview with the Times Argus that because the signs are in the city’s right-of-way, they are exempt from review. This exemption was intended for street name signs and traffic direction (such as stop signs).

While one could argue the entry sign is a name sign, and take a minimalist approach to the city’s obligations, the city has lost a tremendous opportunity to build community and to model good behavior.  In fact, the sign is far more than directional; it is 20 feet tall and sculptural. Its creators said explicitly it is a branding, an advertisement, a billboard. If any private developer erected such a sign anywhere in the legal boundaries of Montpelier without approval, it would raise an uproar from neighbors.

The underlying problem, I think, is that city councilors — who are basically volunteers — get worn out from public debates about many subjects. Projects such as the wayfinding plan require an incredible number of hours from volunteers. City staff members have limited time. It is probably tempting to limit full public discussion of built changes. Mike Miller summed it up with these words: “Some of what the city does could be at risk of delay from those who don’t want a certain project.”

But I believe that when the city acts as a developer, it is fully obligated to ensure its entire population is informed. Why? Because the city’s collective mind makes the best decisions. And when information is shared regularly through a project, that collective mind can work linearly.

Will a city of 8,000 people ever reach unanimous agreement? Rarely, if ever. But consensus is a time-honored principle of democracy. It takes time and is often tedious. It is this collective process that reinforces community itself. Vermonters were very good at this until the decline of town meetings.

I would like to share the example of Craftsbury’s public library. That building is owned by a private corporation in a town with no zoning, so they had no obligation to work with the public. Yet at every step every individual was kept informed and encouraged to speak, meetings were held, and concerns addressed with care and respect. The conception of the library itself strengthened the community. And every Craftsbury resident fiercely loves their library, considering it a second home.

Craftsbury is smaller than Montpelier, but collective democracy is no less valid here. Yes, it takes time. Yes, every Montpelier citizen, merchant, and city representative is short on time. But it is the preciousness of time spent for the collective good that makes our town so sweet.

I don’t think we’re at the final chapter of the entry sign’s story yet. I hope that the City Council will hold a discussion of what can be done (rather than focus on what is already done). We now own an entry sign. It could, for example, be moved somewhere more useful. Who knows what other healing solutions can be imagined. Let’s model democracy for other Americans. 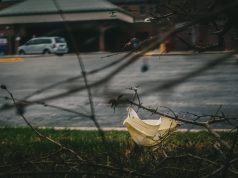 Opinion: Coping With Fear in a Changing World