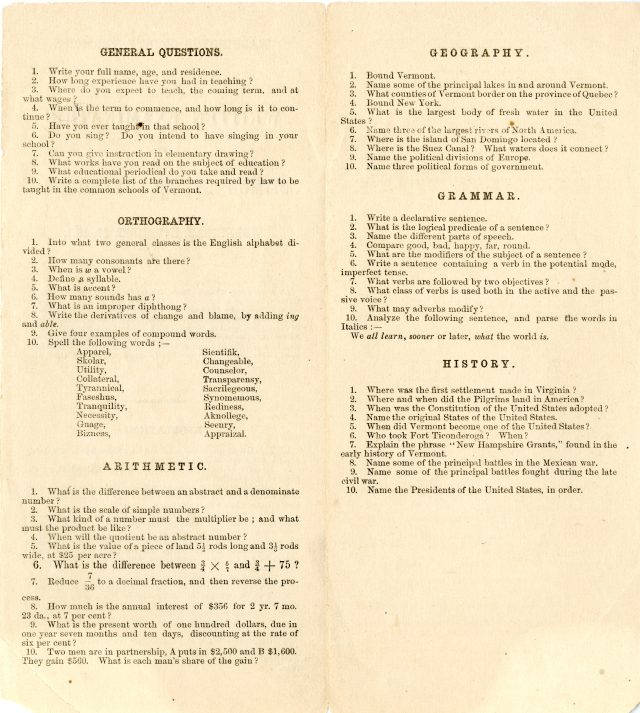 God seems to have made women precisely suited to judge and develop the infant mind and it seems very poor policy to pay a man $20 or $22 dollars a month for teaching children the ABC’s when a female could do the work more successfully and at one third the price.  — Littleton School Committee, Littleton, Mass., 1846 You have to admire those frugal old New Englanders, so quick to spot a bargain. They may have felt magnanimous in offering the job to any woman. In the early 1800s, nine out of ten American teachers were men, generally white, relatively well-educated men for whom teaching was often part-time work, perhaps as a sideline on the way to the practice of law or entering the church. However, as the American population grew and more jobs in industry appeared, it was becoming difficult to find enough men who were willing to teach. School committees were forced to recruit women and, apparently, discovered hidden benefits. Despite the  assertion that women were best fit to teach “the infant mind,”  teachers often found themselves presiding over one room schoolhouses that might include a variety of students from 6 to 14 years of age. The older boys were more likely to attend only when the farms had less need of them and may have regarded teasing and flirting with a young teacher as an agreeable way to pass the time during the long winters.  Although the profession was opening up to women, the requirements were becoming more codified. In the mid 1800s, Vermont, like other states, began to create “Normal Schools.” These would be dedicated to the establishment of teaching norms. Written exams were also required in Vermont from the middle of the 19th century.  If you were to apply for a teaching job in Washington County, Vermont, in 1871, you would have to sit for the exam shown here. In addition to a set of general questions (e.g., Can you sing?)  the applicants wrote answers to 50 questions in five categories.  Modern elementary and secondary teachers must also take an exam, the appropriate version on an online multiple choice test called the Praxis. You can see a sample of this by going to a website such as Khan Academy (khanacademy.org).  Like her modern counterpart, the 19th century candidate took the exam in a dedicated and supervised space. Which test is harder? You be the judge, but remember, in 1871, the hopeful candidate needed to come up with only 18 names for question 10 in the History section.
UNDERWRITING SUPPORT PROVIDED BY