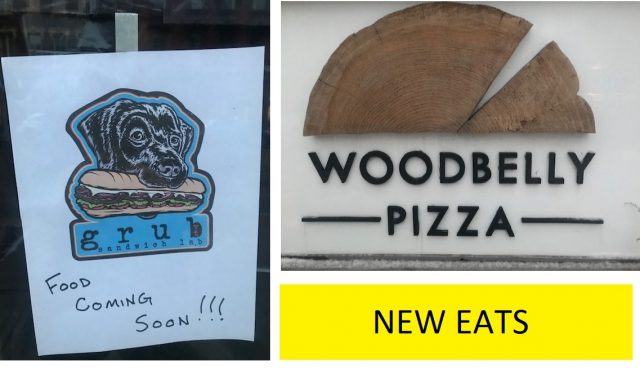 Despite the challenges wrought by the pandemic, Montpelier restaurateurs are looking to the future. Here is the latest:

Grub: That’s the new name for the takeout operation located in the former Pinky’s space at 14 State Street. Montpelier native Jameson FitzPatrick bought the business from Kathy Berry and Nancy Martel and plans a soft opening with a limited menu this Friday and Saturday. A bigger menu will be available next week (see grubvt.com for the menu).

The offerings will include soups and sandwiches, including paninis, and eventually takeout foods such as pulled pork and mac and cheese and even breakfast, FitzPatrick said. “We are revamping the Pinky’s menu,” he said. “People have been letting us know what they liked.”

The interior is being reworked to include a takeout window and larger kitchen space, FitzPatrick said. Grub’s hours to start will be Monday through Saturday, 10 a.m to 3 p.m.

Woodbelly Pizza: The popular Farmer’s Market pizza vendor is opening a restaurant at 79 Barre Street in early January, starting with takeout only – and a delivery option – on Fridays and Saturdays from 3 p.m. to 8 p.m., according to worker-owner Dave Dickson.  Woodbelly hopes to open on additional days as demand increases.

Since summer, Woodbelly has been working on creating a new restaurant space, now nearly complete, although Dickson said it will not be open for in-person dining “for quite a while.” The space includes a 10-person bar, seating for an additional 20 people and room enough that Woodbelly might offer prepared food in addition to pizza, he said.

The worker-owned cooperative purchased some of its equipment from the now-closed Montpelier restaurant the Blue Stone, including wood from that bar, which has been incorporated into Woodbelly’s new bar, Dickson said. He said the Woodbelly’s wood-fired oven had been completed and he was beginning to cure it with small fires.

Julio’s Cantina: After being closed briefly before and after Thanksgiving, Julio’s reopened Dec. 5 for takeout only. A new delivery service is being offered for those who order online (juliosmontpelier.com).  Julio’s hours are Thursday to Sunday, 4 p.m. to 8 p.m.

Julio’s owner John Mayfield told The Bridge recently that the restaurant had been closed as a precautionary measure taken in light of the spike in COVID-19 cases in the area. “We are making this decision out of an abundance of caution, for you, our community, and our staff,” he wrote in a Nov. 24 Facebook post.

Looking forward to the day it can go beyond takeout and open up indoor dining again, Julio’s plans to install a new HVAC system and operable windows to provide better air circulation.

Taste of Montpelier Packs the Streets