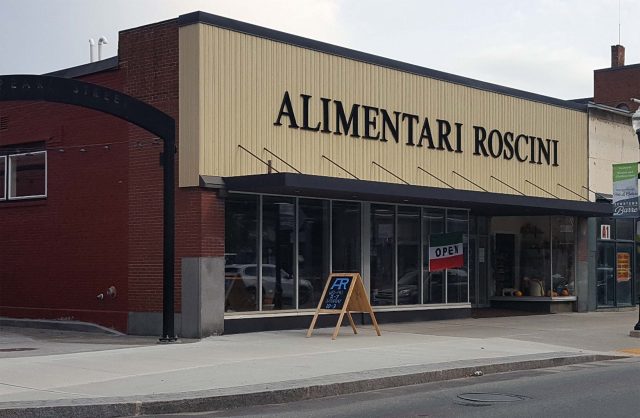 Downtown Barre is a food desert, at least in terms of fresh food and produce, according to Peter Colman, owner of Vermont Salumi. “What we’ve done is unintentionally provide a service by opening a place in downtown Barre where people can buy fresh food,” he said. He is speaking of his new venture, AR Market, also known as “Alimentari Roscini,” which is the name that appears in large letters over the sidewalk on the building’s marquee. The word “Alimentari” roughly translates as “grocery;” “Roscini” is the surname of Colman’s Italian family — he was born in Assisi, Italy, to an American mom and an Italian dad, and it is where he learned how to make salami and other cured meats. The market opened in September in the former Homer Fitts storefront on North Main Street. The remainder of the space behind the market is occupied by the processing and aging rooms of Vermont Salumi.  The sleek new market gleams with shelves stocked with Italian specialties, fresh meats, wines, cheeses, dairy products, coffees, and fresh produce, most of which is locally sourced.  And, of course, there is a large display case with Vermont Salumi products. Colman started Vermont Salumi a number of years ago, first in a room in his apartment and then using the Food Hub in Waitsfield to produce fresh Italian sausages and artisanal aged salamis. But demand outgrew the space, so Colman moved Vermont Salumi to Barre in 2019.  Colman said he can now produce up to 45,000 pounds of cured pork products a year. He was also able to expand his line into making larger salamis, such as those suitable for deli slicing, and Italian specialties such as capocollo, bresaola, lonza, and maple-cured and smoked cooked hams (called “prosciutto cotto” in Italian).  Part of the reason for opening the market was to provide a place to showcase his artisanal salamis and other cured meats. Colman knew, however, that he would need to expand his offerings to make the market work, so he added fresh meats, cheeses, dairy products, wines, and fresh produce, all with an emphasis on local. “For the most part our produce is local, although we do procure some items from California,” Colman said. He reeled off the names of some of his suppliers: Pete’s Greens, Pebble Brook Farm, Cate Farm. (Colman’s mother, Sally Colman, and her partner Richard Wiswall own Cate Farm in Plainfield.) “We offer fresh beef, which is from the Northeast, grass-fed, and grain-finished,“ he said. “Our chicken is from upstate New York.” He also pointed out that, just like the pork used in his sausages and salamis, all the meats he sells are antibiotics free and humanely raised. According to Colman, local residents can now get fresh produce and meats without having to drive or figure out the bus schedules to get to Price Chopper, Shaw’s, or Hannaford.  The spacious market only occupies about half the storefront space in the building along the North Main Street sidewalk. The other half is quiet now but is already filled with tables, chairs, and a bar. Colman’s intention is to expand into prepared foods and house-made fare.  According to Colman, people seem to be working more and more, both here in the U.S. and in Italy. “There is not a lot of leisure time in Barre during the day – it’s a working town,” he said. “Nurses, plumbers, electricians, lawyers. They just want to just come in and grab something. Paninis and things like that. In and out. Easy, light. There are not many places for quick lunches in downtown Barre.” Colman hopes that as they expand they can provide that service during the day.  He also hopes that down the road people will be able to spend evenings at AR Market. “We already have a liquor license,” he said. “What I envision is a wine-centric menu. No liquor. Light food. Maybe pasta. We’ll see. I’d also like to have a situation where we are post-COVID and don’t have to wear masks so we can host events such as tastings and education pieces.” But until then, he is focused on slowly expanding the market and its offerings. “We’re still in a learning curve and taking it slow so we can work out our systems and figure out what people want. First and foremost we want to offer good food with an Italian flair.” AR Market is located at 159 North Main Street, Barre and is open Wednesdays through Fridays from 2 to 7 p.m. and Saturdays from 10 a.m. to 3 p.m. Credit and debit cards and EBT cards accepted. For more information visit armarketvt.com.
UNDERWRITING SUPPORT PROVIDED BY