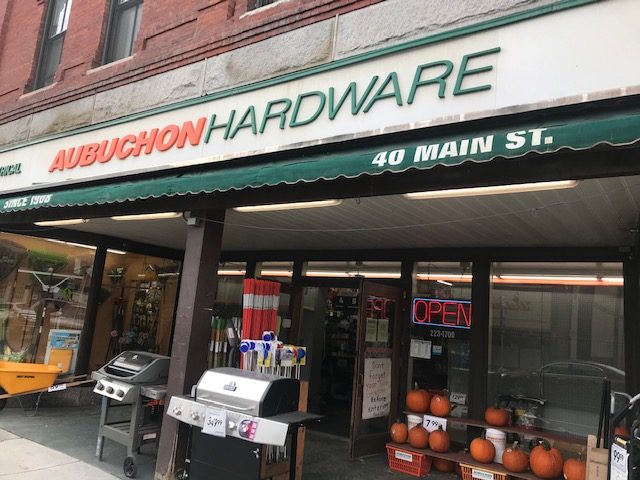 Aubuchon Hardware’s downtown Montpelier store — like all of Aubuchon’s stores — has had a “really, really busy year,” according to store manager Gregg McNelis. So busy that weekly Montpelier store sales are up an average of  20 percent over the same week last year, he said, with some weeks up more than that.

“When the coronavirus went nationwide, things became very hectic,” McNelis said. “After everyone realized they were locked down, home projects became a source of release. People got stir crazy and decided to do something instead of watching Netflix all day.”

Aubuchon employee Tip Ruggles, who has worked in the hardware business for decades — first at his family’s now-closed Somers Hardware and for the last 11 years at Aubuchon — said 2020 has been a “really crazy year. I’ve never seen a year like this.”

Indeed, nearly all aspects of home improvement are booming this year. Even as many homeowners have been working on their own homes and yards, others have tried to line up contractors to do work, only to find that local carpenters, painters, masons, landscapers, electricians — just about everyone who works on houses and yards — are swamped with work and are sometimes turning away customers.

McNelis noted that contractors who buy supplies at the Montpelier Aubuchon store were busy before the pandemic, but are now even busier, and in some cases are buying a greater quantity of supplies. “We’ve faced challenges in getting some things for them, such as personal protective equipment like masks or cartridges for ventilators,” he said.

The simultaneous real estate boom that is occurring in Vermont has also played a part in driving up Aubuchon’s sales. Lots of people have been painting their houses or otherwise fixing them in order to sell and take advantage of the strong market, McNelis said. “Paint has been huge for us this year,” he said.

The real estate boom paired with the pandemic has also led to staggering lumber price increases, according to Aubuchon customer Ian Gile of Montpelier, who works for Clark Builders in Calais and was waiting to be served on a recent busy Saturday. Overhearing a discussion of business this year, he said that soaring lumber prices should be mentioned. “Eight months ago, a two by four by eight cost $2.50, now it costs $8,” he said, while the price for certain sheets of plywood has jumped from $8 to $30.

Lumber is in short supply, he noted. “I have a buddy who’s brother on Cape Cod wanted to build a deck, but he couldn’t find any pressure-treated lumber,” Gile said. “So he ordered some up here and drove up to get it.”

Gile’s employer is booked nearly two years out and is turning away business, he said. “We just started construction on a new house in South Barre, and we have three more lined up after that,” he said.

At Aubuchon, much of the sales boom can simply be attributed to people doing more things at home, such as gardening. “We’ve sold lots of seeds and other gardening products,” McNelis said. “Now we are selling out of canning jars. We are also having a hard time keeping fencing in stock.”

The pandemic-caused boom in home improvement, while undoubtedly profitable for Aubuchon, has also been challenging, according to McNelis. Business was slow last winter, he said, and the chain had cut its payroll. But when the boom hit, the store found it was understaffed.

“Finding people to work was hard when the government was giving an extra $600 a week to those who were unemployed,” he said. “But after that ended, applications started to trickle in and now we are up to 17 employees.” Contractors have also told him they are having a hard time finding workers, he noted.

Operating the store was a different experience in the early days of the pandemic, McNelis said. “At one point we were letting only three people into the store at a time, then it went up to 10. Now because restrictions have been lifted we can have 27 people in the store at once.”

Curbside pickup and online ordering were other changes to which the store had to adjust. “Before, we used to get only about seven online orders a week,” McNelis said. “Then in April and May we started getting 50 online orders a day.”

McNelis, who lives in South Burlington, moved to Vermont 10 years ago to go to college, attending CCV and graduating from Champlain College. He also came here because he likes to ski. “I love it here,” he said.

McNelis has worked for Aubuchon for five years and has been the manager in Montpelier since December. “This store is great,” he said. “It has a nice hometown atmosphere.”