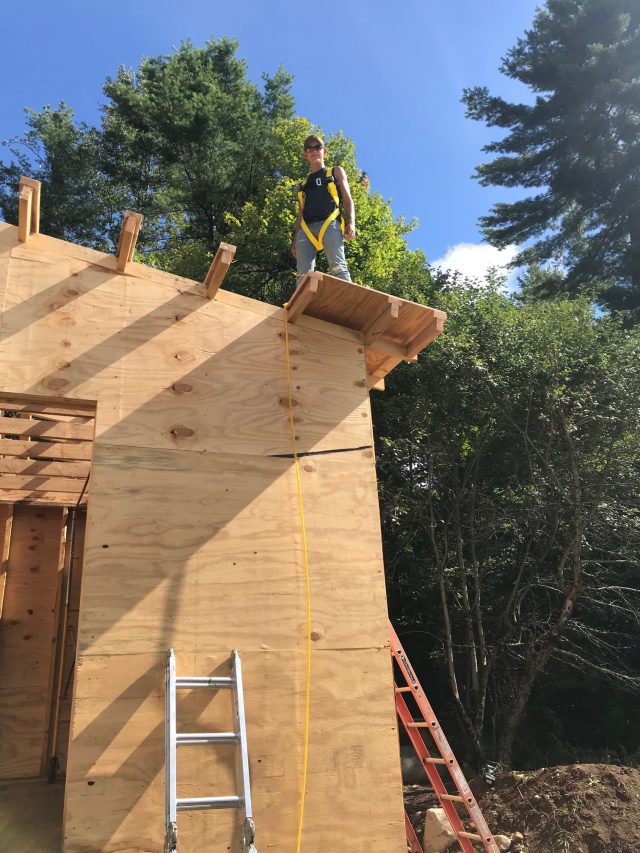 Sixteen-year-old Kolby LaPerle is walking on the roof of a 30-foot building. He has a harness as a safeguard, but he moves confidently and without a misstep. Down on the ground, his co-worker, Noah Spaulding, is working with a power saw under the eye of master craftsman Paxton Anderson. Both teenagers are building a  “bicycle barn,” which will store mountain bikes used in the PE program at Twinfield High School. The completed structure will provide easy access to the bikes, and a ramp will allow students to glide right out.

The workers are students themselves, but not at Twinfield. They’re part of an alternative high-school program called ReSource YouthBuild, which offers academics and a chance to learn occupational skills. The bicycle barn is the first project that will be completed since the pandemic hit in March. YouthBuilders, however, have also worked with organizations such as the Old Labor Hall in Barre and the People’s Health and Wellness Clinic in Plainfield. They will at times take on projects for individual homeowners, but the focus is on helping nonprofits as a way of giving to their community.

YouthBuild was founded almost 50 years ago in Harlem by Dorothy Stoneman, who wanted to “mobilize teenagers to become a positive force for change.” The Havard graduate moved to New York in 1962 and had been teaching in the inner city when she began to envision an organization for young people that would have three goals: community service, job training, and academic accomplishment.

She asked a group of inner city teenagers what they would do for their community if given some adult help. They told her, “We’d rebuild the houses. We’d take the empty buildings back from the drug dealers and eliminate the crime.” That successful project was the beginning of an organization that would eventually be known as YouthBuild.

There are now hundreds of YouthBuild organizations in this country and 80 in 21 countries around the world.  In Vermont, ReSource operates two YouthBuild programs: one in Burlington and one on Granite Street in Barre.

Each YouthBuild center is staffed by a teacher for academic work, a project manager, and a master craftsman for job training. Most of their student recruits begin as juniors in high school, generally those who have found that the structure of a traditional high school is not working well for them. Spending part of their day learning about a specific craft can open up a new world for a teenager and new job opportunities as well.

Emily MacFayden is the academic specialist with Barre’s YouthBuild, Each student works on an individualized program based on reports from their local high school. MacFayden notes that one of the immediate benefits of joining YouthBuild is that attendance usually improves, sometimes dramatically, which gives them more access to academic learning. She has seen that the work itself helps to develop “mental toughness,” a quality that also makes them more employable. They try to keep enrollment small, with eight as a target number, but it may go as high as 12.

YouthBuild  has a “special relationship” with AmeriCorps. Students are considered to be members of AmeriCorps while they’re with YouthBuild. While they don’t receive salaries from AmeriCorps, the high school students are entitled to a certificate for participation and financial assistance toward further education when they graduate.

MacFayden says there are only boys in her Barre program at the moment, but this is not always the case and definitely not the case nationwide or worldwide.

October is a popular time for signing up. High school juniors or seniors who have been unhappy but wanted to give school one more try may decide in early fall that they still feel the traditional setting isn’t right for them. If a teacher or guidance counselor recommends YouthBuild, they don’t completely sever ties with their local school. They receive diplomas and are invited to graduation, but MacFayden says they often prefer to plan a celebration with their own YouthBuild group.

The employment rate after graduation is usually 100 percent, and there’s another plus. Work in the building trades offers these students a reward many white collar workers in their cubicles may never know, the satisfaction of creating a useful product from start to finish.

No one pretends it’s going to be easy, although former YouthBuild graduates often talk about how much fun the experience was. That’s not hard to believe. Watching Noah and Kolby as they stride across a roof, saw new wood, or scramble up a ladder can leave an observer thinking that, for some teenagers, this is the dream of what school can be.