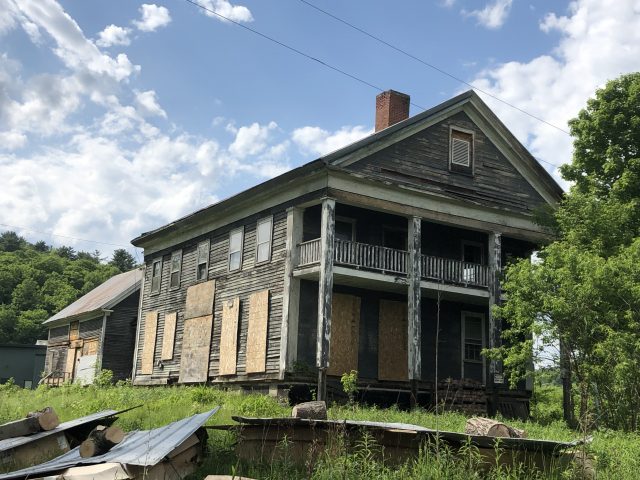 Tucked back off the side of U.S. Route 2 in between Agway and the old Cabot Cheese headquarters is a flat chunk of about 15 acres of undeveloped land jutting out into the confluence of the Stevens Branch and Winooski rivers. On the same piece of land, up by the highway, is a big, formerly stately but now decrepit structure built in the Greek Revival style. It looks like it was once a majestic working farmhouse, with pillared porches and second floor balconies, but after years of disuse, it has deteriorated to the point where City of Montpelier officials declared it a public nuisance. This means that unless someone does something fast, it will have to be demolished. Some want to save the building because it was built in 1836 and sits on land originally owned by one of the first permanent white settlers of Montpelier, Col. Jacob Davis. In fact, according to historian Daniel Pierce Thompson in a piece titled “History of Montpelier” dated August 1860, it was Col. Davis who named the town after the French town Montpellier in an homage to its mountains. Davis was named among 60 others in the original land grant and charter of the town of Montpelier in 1780-81. But Davis did not actually build the house himself, since he died in 1814. But that aside, the building and land are currently not being used by anyone, and it appears multiple stakeholders are at passive loggerheads, making any progress difficult. The most recent owner was a nonprofit organization called “Food Works at Two Rivers,” which dissolved in 2014 because of financial difficulties. And, while people (including Jamie and Maria Duggan and, most recently, Elizabeth Parker) have come forward to ‘rescue’ the building, it has proven to be difficult. Still others, including Mayor Anne Watson (who spoke during the June 24 City Council meeting) — fearing the building is a danger to the public — would be satisfied with demolishing the building, acknowledging the historic site with a sign, and building some kind of community-oriented center in its place. The back land could be used for a dog park, public gardening, or other recreational purposes, including using the two rivers that abut the property. City Council tackled the topic once more during their meeting June 24. City Manager William Fraser recapped the situation. “A year ago the city declared it a public nuisance due to its condition. It is considered to be a dangerous building. And the city actually fenced it in and boarded it up.” But there is no one with whom to negotiate because the owner does not exist. “Our options are to move forward and schedule it for demolition, set a date, or do nothing,” said Fraser. Complications and costs involving easements, right of first refusal, preservation, and conservation may be why no one has been able to make a go of plans for using the property. For one thing, the Preservation Trust owns an easement that requires any person who purchases the property to fix it based on the historic integrity of its original condition, Fraser said. Also, Food Works awarded a neighboring landowner, Connor Contracting, the right of first refusal if the property is being sold. It is unclear, since Food Works has dissolved, whether that agreement still has teeth. And, in addition, the Vermont Community Fund is owed a $100,000 mortgage. But none of these interested parties are swooping in to take over the situation. Montpelier Building Inspector Chad Lumbra conducted an inspection of the old farm house on March 18, 2019. He reported that, at the time, numerous windows had panes missing but were not boarded over. This made it easy for people to get in if they wanted to. The conditions inside are not safe, he asserts, pointing to sagging floors, sagging roof, deficient framing, rotted wood, and a foundation that “shows evidence of moderate/severe recent movement/failure.” He concluded the building is not suitable for occupancy. In a May 8th letter of this year, well-meaning would-be rescuers Jamie and Maria Duggan wrote a letter to the City Council regretfully bowing out. “Dear City Council Members, It is with regret we must inform you of our intent to withdraw our proposal to start a non-profit that would seek to take over ownership of the property at 5 Home Farm Way in Montpelier. … Based on advice and guidance from our legal counsel, as well as real estate and development mentors, we were not able to identify a prudent path to ownership.” They went on to describe how their attempts to work out a deal with the other parties involved were unsuccessful. However, they said they would help if others could find a way to fix up the property and make it work in hopes of preserving the building. So why doesn’t the city just sell it by tax sale? Food Works at Two Rivers was a nonprofit organization and was not on the tax rolls, explained City Manager Bill Fraser, so no taxes were owed on it. However, Fraser said the property is now back on the tax rolls, since it is no longer owned by a nonprofit organization. Meanwhile, meeting participant Elizabeth Parker vowed to put together a plan to fund the rescue of the building and start a community program. City Council members casually agreed by thumb signal toward the end of the meeting to keep monitoring the situation as observers rather than participants and step in should imminent danger arise.
UNDERWRITING SUPPORT PROVIDED BY