Home News and Features Sponsored Content Seen on the Street
Facebook
Twitter
Email
John Lewis was Known for Kindness The paint is faded, but the message resonates on a day the nation honors Congressman John Lewis, who died July 17, 2020. Lewis was known for standing beside Martin Luther King, Jr. on many occasions during the Civil Rights movement. Lewis risked his life and got arrested many times on that journey. Later, in 1986, he was elected to the U.S. House of Representatives. This photo was taken in Summer Street Park in Montpelier. Photo by J. Gregory Gerdel. Thank You, Montpelier Fire Department! Here’s a photo I took of the Montpelier Fire House. Can we give a bit of press and a big thank you to the firefighters of Montpelier who are always there for us, no matter what the problem? Love their message:  “Keep Smiling.” Many thanks, Arlene Valentine, Montpelier, Vermont. Langdon Street Parklet Ready for Customers
“Steel barricades have been placed along the upper half of the street! It’s important to note that traffic will be able to enter Langdon Street from Main Street and exit onto Elm Street, as usual. The only difference is where the travel lane for cars will exist. Thus far, only one restaurant has taken advantage of this new configuration. If the restaurants require less space, Public Works can remove the fencing and allow some parking spaces to return on the right side of the street. We’ll monitor and work with businesses to test and adapt so that we maintain safety and explore opportunities for local businesses.” From the Montpelier City Manager’s report released July 24. Trash Runneth Over “Many people have observed that trash has often been overflowing in downtown trash barrels. This is partly because of reduced DPW staffing and resources. The budget called for us to eliminate our contracted service and perform the work with city staff, which added two new people. With COVID-19 we have furloughed existing staff and frozen the new positions but had also cancelled the contract. We have lined up a new contractor for the time being who will begin on Monday. This will address the immediate situation. The other major factor, though, is that we have discovered a proliferation of home garbage being dumped in the street cans. This has not been a problem in the past. People who are financially challenged right now may see this as an alternative to paying for collection. It also may be a way to avoid mandatory composting. We will be taking steps to prevent this practice.” From the Montpelier City Manager’s report released July 24.
UNDERWRITING SUPPORT PROVIDED BY 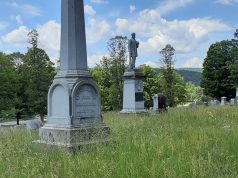