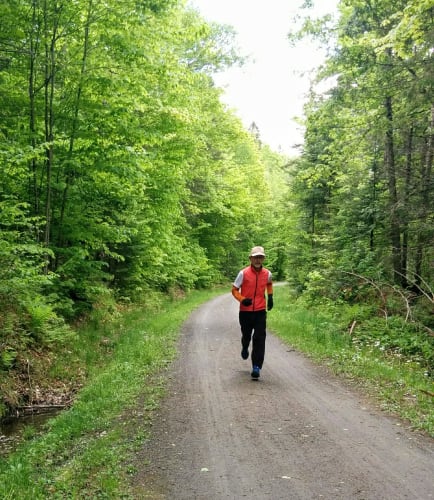 For runners, “virtual” runs and races do not take the running out of the experience. But they do transcend the difficulty of physical distancing in the traditional event format by dramatically spreading the start time over several weeks or months. For runners of all types, talent, and ambition, a key strategy for motivation has long been preparation for a race date several weeks or months in the future. When the challenge of sustaining that motivation in a year when the arrival of a pandemic erased the club’s long-standing race schedule, Central Vermont Runners has created a virtual solution to keep runners running. Manny Sainz, who was elected Central Vermont Runners Club president in March, abruptly found himself leading an organization the events for which could not be held under the State of Vermont guidelines established to limit the spread of COVID-19. “The Mutt Strut in April was the first cancelled, then the Adamant Half-Marathon, which was scheduled for May,” Sainz said. In April, the Central Vermont Runners Club race committee came up with a rescheduling plan for the Spring, an eight-week series of virtual events where each runner could select among several race distances and record and report their time running when and wherever they chose. The club’s Social Distance Virtual Run Series was a hit. “We had 75 people sign up immediately.” Sainz said. Geographic positioning system (GPS) technology is key to virtual racing, and software developers have created at least half a dozen apps that provide this service. Sainz, who, when he is not running, is a data analyst for the Vermont Agency of Transportation, found an online reporting system to compile the weekly results. “We had really good participation,” Sainz noted. A total of 112 runners reported 295 events over the eight weeks of the initial series, with an average of 35 runners reporting each week. In addition, Sainz pointed out, the Spring Series raised $720 for the Vermont Food Bank through sales of a special Central Vermont Runners hat and direct donations. A second round of virtual races is now underway. The race committee met again in early June and devised the Central Vermont Runners 2020 Participation Race Series, which incorporates the courses of nine events that usually occur between June and Labor Day weekend. “The objective was to keep the spirit of these events alive while meeting the guidelines of our insurer [Road Runners Club of America] and of the State of Vermont.” Sainz said. The club’s website provides a map of each course, directions to the start line, and how to report your results. Registration closes on August 1. To participate, “Run any or all of the series races between June 21 and September 6. You can run the races in any order. Enter your time in the system to be eligible for prizes. Prizes are awarded randomly; the more races you’ve run the greater your chance of winning a prize.” Check out the CVR Race Series by clicking HERE The mapped courses include: Sainz noted his appreciation of the ingenuity that went into creating both virtual series. Contributors include Sal Acosta, Central Vermont Runners vice president, and the members of the race committee: Andy Shuford, Shannon Salembier, Donna Smyers, and Jeff Prescott.
UNDERWRITING SUPPORT PROVIDED BY