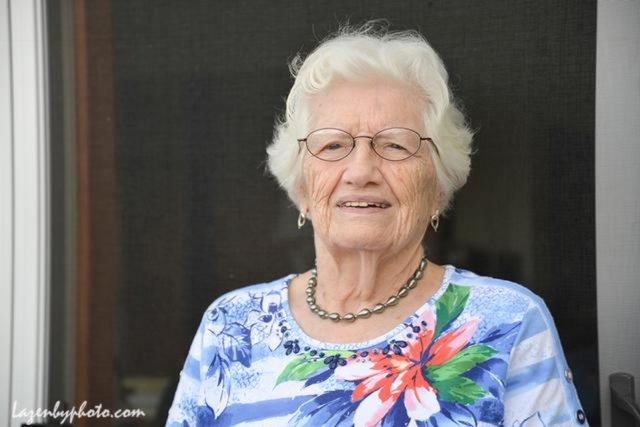 When Norma Raymond turned 95, the lawn outside the Montpelier Unitarian Church was full of well-wishers. As of a week before her July 15th birthday this year, when she turns 97, she had no expectations of a party on her birthday — the assisted living facility she lives in remains under quarantine. I caught up with the longtime East Montpelier resident, now temporarily staying in Heaton Woods in Montpelier, to get a local perspective on aging with grace. I wanted Raymond’s perspective to complement a radio interview with bestselling author Elizabeth Marshall Thomas on her latest book, published at age 88, “Growing Old.” While Thomas told me she started feeling old when she hit 80 or so, Raymond seemed to have access to a fountain of youth, until she didn’t. “I felt so young and everything through 94 and 95,” she said, “and then I hit 96, and that’s when all this stuff began.” She was living in her home on Towne Hill Road when she had a heart attack and a small stroke on January 3, which began an odyssey to Central Vermont Medical Center and then Woodridge Rehabilitation and Nursing. When she was strong enough she moved back home — for a while. “I had a HomeShare tenant coming,” she said. “I’ve always done very well with HomeShare. I had three HomeShares who are still in touch with me, friendly with me, very often.” HomeShare Vermont matches people with a house to share, and who often need help around the house, with people who need a home and are willing to assist in chores in return for reduced rent. After her return from Woodridge, however, Raymond said the HomeShare tenant didn’t work out, and she moved into Heaton Woods Residence in Montpelier. When the COVID-19 pandemic was detected in Vermont in March, long-term-care and group-living settings such as Heaton Woods closed their doors to visitors. The older residents are especially vulnerable to the coronavirus, and more than half of Vermont’s 56 COVID-19 deaths have occurred at two elder care homes in Burlington. In June, state guidelines began to allow visitors on a limited basis, and Heaton Woods has opened for visitors three days a week. “You can sign up to have visitors Mondays, Wednesdays, or Fridays,” she said, for a half-hour visit, with everyone wearing a mask. Hugs and kisses are still not allowed; Raymond said visitors and residents must stay 10 feet apart, on benches. A week before her birthday, Raymond was preparing for her third in-person visitor since March. Raymond was born in 1923 in Charlotte, where she spent her early years. When her father took a job working as a mechanic for state road maintenance vehicles, Raymond’s family moved to Putnamville. Raymond went to school there, and then to Montpelier High School. After she graduated, the U.S. entered World War II, and Raymond joined the Red Cross to assist nurses at Heaton Hospital — now the Heaton Woods Residence where she is currently living. She recalls volunteering in that capacity from 1942 to 1948 or 1949. “Nurses were leaving hospitals for the war,” she said. “My sister was in Europe for the war.” After high school, she also found Montpelier Unitarian Church, where she has become such a force that one member told me last year a project wouldn’t succeed in the congregation without Raymond’s blessing. She started attending at age 18. “For a long while, I was the youngest one active in the church,” she said. She married Lewis Raymond, and they moved to East Montpelier, where they milked cows and raised pigs, sheep, and ducks. At one point, she said, her husband got sick of dairy farming, so they got rid of all the animals and started boarding horses. Lewis Raymond also worked off-farm jobs, at Heaton Hospital and, later, for the state highway department. In East Montpelier, Raymond became the town’s first school “bus” driver in her four-door Model A Ford, she recounts. She started out driving her oldest son to school, and then a neighbor boy — and then more neighbors. Pretty soon she was making two trips. She didn’t charge anybody for the service until a school board member approached her about picking up more kids as a school employee. They paid her a dollar a day to make the rounds, she said. Eventually she bought a Chevy Suburban and converted it into more of a bus. The couple moved to Raymond’s current home in the mid-1980s, and Raymond is known as a force in the neighborhood — with friendships and family ties apparently stretching long distances in all directions. Two neighbors refer to themselves as Norma’s “Daughter number one” and “Daughter number two,” and one of them, Rachael Grossman, recounted standing in line with Raymond to get into a Ground Hog Opry performance in Waterbury. “We started out chatting with someone ahead of us who we knew, and it turned out they were related. She knows everybody; she knows everything; she is an unstoppable force for social justice.” Grossman’s husband, Paul Erlbaum, was part of the conversation, and he added, “She has had an ‘Impeach Trump’ sticker on her car since he was inaugurated.” Today, Raymond hopes to return someday to her East Montpelier home. In Heaton Woods, she’s often on her phone or FaceTime, keeping up the network of contacts she’s built up over nearly a century. (Her home phone number now connects to her room, so friends don’t need to look up a new number for her.) She takes walks around the outside of the building but never leaves the grounds. While she supports the quarantine for elder living homes, she said with discouragement, “I may be in quarantine forever.”
UNDERWRITING SUPPORT PROVIDED BY