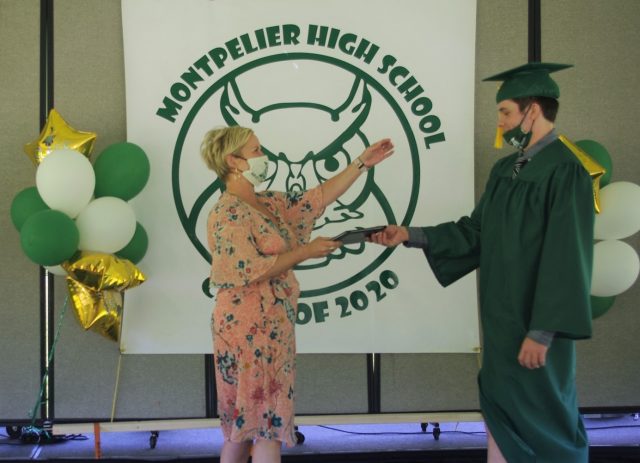 It had all the pomp and circumstance without the parking and traffic hassles (as history teacher Jerry Tillotson pointed out). After weeks of planning and preparation, at 6 pm on Friday, June 12, Montpelier High School principal Renee DeVore could be seen handing diplomas to a steady stream of seniors crossing a stage set up on the ball field. But none of it was live. Each aspect of the graduation was filmed separately—and at different times—in order to keep everyone socially distant and safe from COVID-19. This seemingly traditional conferral of diplomas was preceded by a procession of the Catamount Pipe Band in traditional Scottish kilts, who walked from the school to the stage. Then, Class President Juna Nagle gave a speech. Nagle shared some fond memories, emphasizing “the saying that our principal always ended our assemblies with, ‘Take care of yourself. Take care of each other. Take care of this place.’” Nagle went on to describe how Montpelier High School taught her that her voice matters and called on people to lift their voices to help fight the injustices of the world. Superintendent Libby Bonesteel spoke next. “What do you say to a senior class unlike any other in the history of MHS?” she said. “As you go out into this uncertain world that needs so much fixing, I’d like you to talk about (U.S.) Rep. John Lewis’s words. He said, ‘get out there and push. And stand out and get in the way and get in trouble. Good trouble.’ We’re watching to see just what kind of trouble you can make to create a better world.” Following Bonesteel, Isaak Donahue took to the mic. He spoke of how, in the weeks leading up to the COVID-19 lockdown, he had been looking forward to the prom, baseball season, and a ‘real’ graduation following a disappointing second place finish in the 2020 Division II boys basketball final at the Barre Aud on March 7. “I went straight to the locker room and was silent. I had to go get our second-place trophy and watch dejectedly as the Fair Haven became state champions,” Donahue said. Somehow, though, he was able to see hope for the rest of the year. “Three weeks later it all came crashing down. Baseball season was supposed to start that day. No one expected our world would actually change before our eyes, and we would never return to our senior year. This is a loss I don’t think many of us have processed.” He then spoke about facing the world ahead. He articulated the collective achievements of his class, including putting up the Black Lives Matter flag, fighting climate change, and supporting his peers in Parkland, Florida, after a shooting incident where 17 people were killed at Stoneman Douglas High School. He asserted that maybe this class has been given these challenges for a reason. “Maybe it is up to us now,” to learn from the mistakes of our predecessors and to imagine a world without war, school shootings, and injustices. “Because you know, 2020, I know we are the generation who can change this messed up world.” Then, Geoff Sather, guidance counselor, performed his traditional graduation song, “Sail On Solons,” with a (presumably separately pre-recorded) chorus of students. And leading up to the final diploma send-off, U.S. history teacher Jerry Tillotson addressed the class. “Being COVID-19 grads has made you a celebrity,” he said. Then, he paralleled the circumstances of this class with the class of 1968, citing the assassinations of then-presidential candidate Robert F. Kennedy and the Rev. Martin Luther King Jr.; the Vietnam war; student unrest, and a major riot at the Democratic National Convention in Chicago. Similarly, 2020 has seen tragedy, he said, citing “the worst pandemic in over 100 years, …massive demonstrations—both peaceful and violent—over systemic racism in general and police violence in particular. Unemployment rates and long food lines not seen since the Great Depression. An economy not expected to reach pre-pandemic levels for years.” At the end of his remarks, Tillotson urged students to get involved and be good citizens, even if it makes people uncomfortable. “Our silence needs to end now,” he said, adding later, “I have confidence in your generation and I have confidence in each one of you.” Finally, the seniors crossed the stage, one by one, and got a diploma from Principal DeVore, with no audience. When each student had received his or her diploma, DeVore introduced the class of 2020 by showing a video of all students throwing their caps in the air in a Zoom-like mosaic video conference. And last, the Catamount Pipe Band closed ceremonies with their emotionally stirring tune. If you watch the video posted on YouTube by ORCA (Onion River Community Access) Media, it appears to be an hour-long event. But that is a result of the magic of ORCA Executive Director Rob Chapman and Production Manager Zach Zorn, who organized the videotaping sessions and then edited it all together. Chapman said he spoke with MHS weeks before the event, explaining this procedure was the brainchild of the MHS senior class. Other schools used other processes. U-32 High School, for example, live-streamed their graduation on the same evening.
UNDERWRITING SUPPORT PROVIDED BY