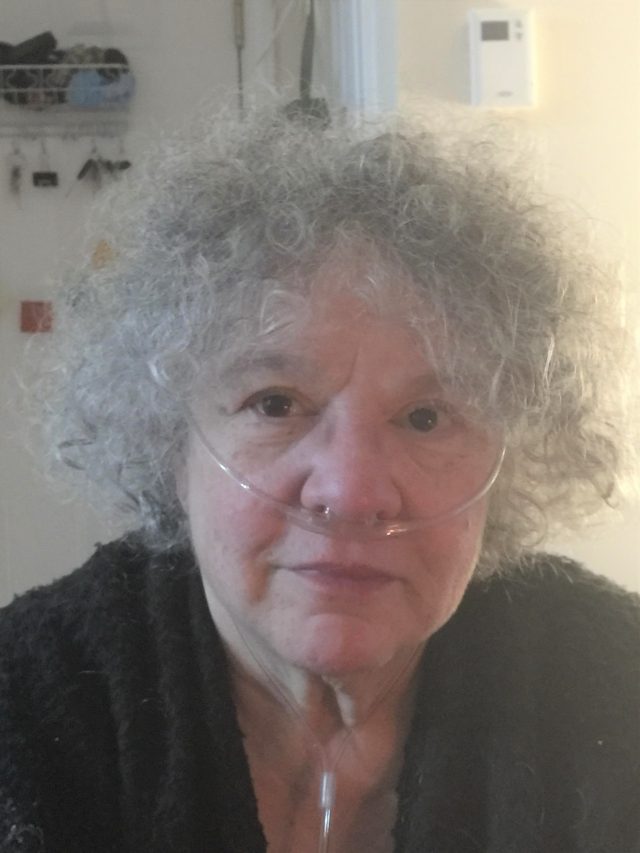 COVID-19 came close to killing Jessie Fisch. And she thought about helping it. Her blood carried so little oxygen, she felt like she was drowning—every waking minute, for days. As the staff at Central Vermont Medical Center kept her alive, the 69-year-old physician’s assistant felt so miserable, she wondered how she could MacGyver a way to kill herself, using what she had in her Intensive Care Unit room. Fisch didn’t come up with a suicide plan she was strong enough to carry out. “I thought, OK, my Swiss Army knife is in my purse,” she said, “but my purse is across the room, and I can’t get across the room by myself.” Fisch is now recovering at home in her condo in Berlin, with the help of Vermont Home Health and Hospice and a furloughed colleague from the Health Center in Plainfield, where Fisch works. She said she summoned the will to live by thinking of others who had survived severe pain. “I thought about my mother, who had MS. She suffered a lot; she couldn’t walk. And I thought about John McCain, a prisoner of war in a bamboo cage, beaten, and starved, and his arms were broken. I thought, ‘People get through amazingly horrible experiences, and you just have to buck up.’” Fisch grew up in New Jersey, and she moved to Vermont to attend Goddard College. There she met John Matthew, who was working as the school’s doctor at the time. Later, he founded the Health Center, which provides health care to anyone, regardless of the ability to pay. Matthew became a mentor and a friend, she said, and she has worked for him since 1980. In March, when Vermonters were just becoming aware that COVID-19 had arrived in the state, Fisch said the Health Center staff worked without PPE. “We didn’t have enough, like everybody else in the world. We were told to put patients in masks if they are coughing, but that we didn’t need one. In retrospect, it certainly wasn’t the right advice.” Infections from the novel coronavirus cause a dizzying array of symptoms. Fisch’s may have started with a cough, which she attributed at the time to a cold. She said she coughs a lot when she gets a cold, and the cough seemed to abate. But when she woke up one night and felt like her throat was swelling shut, she started thinking about COVID-19. Then she had pinkeye, and she went in for a COVID-19 test—which was negative. (A CDC fact sheet for healthcare providers cautions, “A negative result does not rule out COVID-19.”) It took intervention from her daughter, also a physician’s assistant, to get Fisch to go to the hospital. By that time, Fisch had severe diarrhea and was gasping for breath. “It was absolutely hell, because all of a sudden, all you can think about is breathing. It pushes all your panic buttons.” Morphine is used to treat shortness of breath, and she asked for and received the drug when she was admitted to CVMC. However, the hospital’s doctors wouldn’t give it to her on an ongoing basis, she said. “They were afraid it would reduce my respiratory drive.” Without morphine, and living with a severe cough and a constant feeling of drowning, Fisch said she would have welcomed being sedated and put on a ventilator. “Being knocked out seemed really pleasant to me!” She never got the ventilator. Instead, she said, “I basically had a whole lot of oxygen and some Luden’s cherry cough drops.” As a COVID-19 patient, Fisch never left the Intensive Care Unit until she was discharged from the hospital. She was isolated in a negative-pressure room, set up to pull air from the rest of the hospital and discharge it outdoors, along with all the viruses Fisch was shedding. She was too sick to bathe or wipe herself, so if she needed to go to the bathroom, she said, “I had to plan it so people could get into their protective garments and come into the room and deal with it.” Fisch has nothing but praise for the staff at the hospital, who “work damn hard” and were very kind to her. “I had some traveling nurses who were weeping, they were so scared to be in the room with me.” But they were in the room with her. There was nothing to do in her room during the day but to stay awake so she could sleep through the night, so she watched a lot of daytime TV. “It was hard. There’s Trump. Every time I saw him, I wanted to scream, because he’s such a liar. And daytime TV is truly horrible. You see these reality shows where people are being exhibited to make money. Between Trump and that, I decided if I live, I gotta change my life. I’m not going to keep working like crazy. I’m going to tend my own garden and be with my family and hope things get better in this country.” The primary reason Fisch wants to tell her story, she said, is to let people know they are very lucky to have Central Vermont Medical Center as their local hospital. “They can get pretty damn good health care there. And the health care providers really do care about them.” Laughing, she added, “Some LNA from Barre had to wash my butt—it’s almost a religious level of compassion.” Fisch is still recovering at home. She says she plans to return to work in July. But only half-time. There’s summer in Vermont to enjoy and family with whom to spend time.
UNDERWRITING SUPPORT PROVIDED BY