Home Then and Now Then and Now
Facebook
Twitter
Email
The building at 107 State Street, formerly known as the Thrush Tavern and now housing Pho Capital, is the youngest of four Federal style residential buildings in a short section of the north side of State Street. Silas C. French, a boot and shoe merchant, built his home in 1825 or 26 in line with his neighbors’ residences. It was moved back from its original location in the 1950s to make way for a gas station, which was demolished in 2018. The top photo was taken ca. 1900 when the second Pavilion Hotel (built 1874) was in its original location, dwarfing the two-story brick house.
UNDERWRITING SUPPORT PROVIDED BY 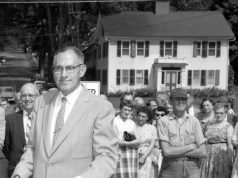